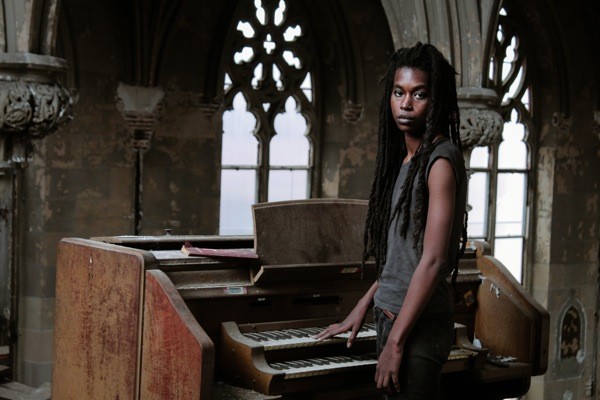 Moor Mother, photographed by Adrian Jackson for My City Paper

Moor Mother goes hard. Her music is not for the faint of heart or ears, and no one else sounds like her. The Philadelphia musician’s work can broadly be called “avant-garde,” but the specifics (or, more accurately, the inability to capture it with specifics) are where her strengths lie. This is electronica, it’s rap, it’s rock, it’s the sound of a rioutous spirit. She self-describes on her bandcamp page as  “Low fi/dark rap/chill step/ blk girl blues/witch rap/coffee shop riot gurl songs/southern girl dittys/black ghost songs.” To give you further idea. Her latest release, Fetish Bones, swept up critical acclaim as “Best Avant-Garde” or “Best Exprimental” record across outlets, and The Wire listed it as a Top 3 release of 2016. Let’s just dive in, shall we?

“Camae is co-founder and organizer of Rockers! Philly, a 10-year long running event series and festival focused on marginalized artists. As a workshop facilitator, she works with youth centered programs, non profits, and shelters. As a curator of fundraising events, Camae has worked with and serves on the board of Girls Rock Philly, and is assistant coordinator of The Afrofuturist Affair, Philadelphia’s premiere afrofuturism organization. Camae is also a poet and author of the forthcoming poetry book Fetish Bones and is an avid zinemaker and collector. She is a member of Black Quantum Futurism Collective, which released its first book, Black Quantum Futurism theory and practice Vol. 1. and has been featured at the Schomburg Center, as well as presented installations at the Rebuild Foundation and Temple Contemporary at Tyler School of Art.”

Add to the above that she was a member of Philly punk mainstays the The Mighty Paradocs, and that in 2007 she was a Blade of Grass fellow for socially engaged artists, and Ayewa’s list of accomplishments  has enough lines in it to be an obituary. But, based on the music she’s making now as Moor Mother, it’s obvious she’s never been more alive. These are sounds from a maker with much, much more up her sleeve.

by Jordannah Elizabeth
A mix to rectify the massive underrepresentation of women in experimental music.