New Music MondayBebe Huxley on Tapping Into Their Dark Side

Bebe Huxley’s videos are like mini-movies. The visuals are breathtaking, abstract, and also very dark. Their music and videos are reflective of their ongoing journey as it relates to gender. Bebe’s latest video, “Darkside,” is a representation of how they navigate and merge the feminine and masculine. It’s a celebration of gender and the journey Bebe’s taken to live authentically.

They spoke about the inspiration for “Darkside,” performing drag, and their Dance Moms-esque background.

The video for “Darkside” is so visually stunning. It’s dark and abstract—a real work of art. Tell me about the process for creating the video. What was your motivation? Who or what was your muse?

I made the video with my partner, Matt Endler. The filming of my performance was inspired a lot by the drag performances I’d been doing in San Francisco. I did a huge variety of performances because I was a resident at a drag club called Aunt Charlie’s Lounge. It was a really special environment that introduced me to the world of exploring gender through performance. We tried to capture that in the performance I do in the video, kind of Hollywood noir with the performer kind of stuck in a void. Then, Matt and I went in. He’s an animator and a 3D modeler, and we spent a year developing these animations, which represented my body.

The inspiration for the animation was the corpse flower, which has this really incredible bloom. It’s a feminine and masculine flower. Also, it was inspired by the human umbilical cord, the stem of the object in the video. It represents my body. It represents gender and the way it’s constantly evolving, being reborn, dying, and exploding. The object blooms, it dances, it lives, it explodes, and then comes back as sparkles and stardust. It comes back together again. It reflects the constant evolution and transformation that we’re all going to have, entering the dark side of questioning our roles and our physical forms.

I see that so vividly in the video for “Darkside.” I’ve watched a number of your other videos and performances, and they’re all very creative. Videos seem to be where you truly shine. How important are visuals for you?

Visuals are so important. I edited the “Darkside” video. I’m so meticulous, and I have a really heavy hand in all the visuals. I went to Berkeley for theater. I’m pretty obsessive when it comes to the lyrics. I record everything myself, mix all of the vocals into the instrumentals. So, it’s like a burst of release. I feel super obsessive, but I want the visual representation to reflect the performance. The way I like to use my body in performance is so specific to the emotion and the sensation of whatever I’m talking about, which is usually seeking some kind of liberation or catharsis.

So, the specificity of the visuals and of the performance is all to weave a really dense story to pick apart and nerd out on.

You’re a performer in every way. Were you in the performance arts, such as dance or theater, as a child? How has that background influenced your love for performance now?

Oh yes. Have you ever seen Dance Moms? That was very much my childhood. I did competitive dance with the makeup and the costumes, not so much with the horrible dictator teacher. I was definitely little showgirl on the road, only child, and I had a very competitive desire to be on stage and win, very Dance Moms style. I danced all the way up to high school. Then, my body changed. I gained a lot of weight, and I didn’t feel at home in my body anymore. I hated the culture around the dancer girls. I had dance teachers who made girls get on scales and whatnot. I just started hating that world.

I switched to the intellectual: I got really into speech and debate and acting. I kind of put the showgirl element aside because it didn’t feel safe anymore. It wasn’t until after college that I embraced my singing voice again, but I was frustrated with auditioning. I did well in school, but right after school, trying to get professional acting gigs felt horrible. I hated all the roles that were offered. Auditioning was terrible. You have to fit their mold of what a normal, young ingénue is. That was so boring to me that I started doing open mics and forming bands and personas. That led me to the drag world, where I could create my own numerous characters and ways of being. It took a long time even then to understand that I could perform nonfemininely.

I was truly raised in the hyper-femme category, and thought that was the only way I could be.

Has music been helpful in the process of figuring out gender for you?

Absolutely. I create all of the music by myself in terms of the singing and the vocals because my producer lives in Canada. There’s a certain safety in being alone with your mic and keyboard, diving into your brain and creating the stories lyrically that you want to live or that you’re trying to give over. It’s definitely cathartic to create it and perform it. I really like to channel the moment when I’m in these personas. They are real to me. They’re all aspects of myself, just hyperbolized.

You often perform in boy drag—penis included. Tell me more about how you got involved in boy drag.

I was living in Berkeley, California, for school, and I was frustrated with contemporary theater scenes. I just started creating my own electronic music. That was when dubstep was huge and raving in the Bay Area was really big. I started out doing sets in party scenes and warehouses until the only place I wanted to go was Aunt Charlie’s. It’s a very teeny drag bar that looks like a David Lynch movie. It probably fits 50 people inside. Everyone is family there. You go once and suddenly, you’re in a vortex of freedom and love. You can walk around with barely any clothing on and feel completely safe.

I asked to perform there once after just going as an attendee. It was a weekly party. I enjoyed it so much that I asked if I could keep coming back. Then, I just was there for three years, and I performed every week. My drag mom there is Mandy Coco. There’s also Miss Shannon; this wild woman is kind of one of the saints of the place. She’s a legendary punk woman and Vietnam vet in her 70s who shows she loves you by whipping out her giant silicone boobs. I dedicated the “Darkside” video to her. She’s quite a character.

Drag is a gateway drug. Once you do it, there’s a little extra addiction—people are addicted to performing. Drag is also an invitation for inventing yourself and getting to live that fantasy. It lives on past the performance. It stays with you. You learn a lot of lessons trying on a different gender reality.

It’s a very psychedelic experience, which is why I took on the name Huxley. Aldous Huxley was a psychedelic sociologist. For me, that was kind of what drag experimenting is about: opening the doors of perception and letting it affect you through the gender performance.

In “Darkside,” you sing, “You took me to the dark side,” which is a line that all people can relate to in various ways. How exactly does “Darkside” speak to you?

I think the dark side for me is that gateway drug feeling, when you’re suddenly dosed with the freedom to think a little bit differently. For me, that opening was really about the spectrum of feminine and masculine, and tapping into a different kind of femininity and masculinity. Masculinity was something that felt very off and untouchable for me. I didn’t know how to practice being a man and performing. I just had to do it. It took one haircut and one performance of a Led Zeppelin song in a suit. I slicked my hair back and drew on eyebrows. I didn’t know how to practice the physicality of being a man, but once you give yourself permission to see yourself in different ways, it’s going to open up the way you see the world.

That’s, for me, the dark side. It’s opening your perception.

Do you think it’s your responsibility through your music and your performing to show other gender-fluid people how to live authentically?

Well, I hope to make art that inspires people to explore. I’m just kind of starting out, so I’m not sure yet how my work is going to affect people. I think it’s my responsibility to speak about my experience, in the most specific and earnest way possible, so people can give themselves permission to explore and experiment in a safe and healthy way. I would only hope that can come from the art-making process.

But my responsibility is not to speak for other communities besides myself and my own journey, because everyone is having their own evolution. This human experience is such a trip, and every context alters it. You can only speak from your own context, which is going to be very layered on its own.

Your forthcoming EP, Scorpio, is being released in the fall. What can audiences expect from that project?

I’m going to put out four videos for Scorpio. “Darkside” is the first. They’ve all been shot, and I’m tirelessly working on editing them. It was produced with Vincent Parker. He lives in Vancouver, Canada. He made all the beats. I made all the vocals. It’s a really rock-’n’-roll, techno, dance, pop explosion. It’s very emotional, romantic, sexy, brainy, and lyrically driven. I’m a vocalist, and I’m obsessed with words. So there’s a lot of dense language especially in the next single “Just Pretend I’m A Man.” It’s a very drag-inspired story. It’s very entertaining. I’m trying to create a rollercoaster ride, like a psychedelic trip. You’re going to go up a big rollercoaster; it’s going to flip you out, and you’re going to feel different at the end. 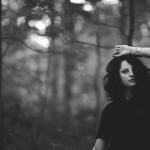