When Emily, Casey, and Catherine met in college, the trio had no intention on upending the music industry. They were simply singers who loved harmonizing in an acapella group. After graduating, each woman embarked on her own path, but decided to reunite musically—after a night spent eating and harmonizing—for a cabaret show.

Since June 2015, Em & the Fates have been using a combination of live instrumentation, harmonies, and modern feminist lyrics about heteronormativity, sexuality, and desire to build a growing fan base. Here, Em & the Fates talk to Bitch about how they came together, their latest video “Prey,” and finding their feminist voice.

The chorus of “Prey” is “Let me be your predator/ And you can be my prey/ Don’t you want to sacrifice your body today?” and the video also seems very forward about female sexuality. Was that intentional?

Emily: Yes, absolutely, it was intentional. It’s a metaphor about taking control and becoming an initiator when it comes to relationships and interactions. A lot of it is sexual, but it’s a less literal and more of a metaphor about being empowered.

Casey: It was a reversal of a really common used metaphor for sexuality. You hear so much about men seducing women or “hunting them down.” I think the way we reverse is something a lot of people haven’t heard before, and that in itself is a really interesting commentary on where we are culturally in understanding the different ways we assign sexuality to men and women. “Women as predators” is also such a fun and relatable metaphor. Even in filming the video, it was fun to embody that song and play around with the idea of what it would be like to play that predator role.

“Prey” also seems to really subvert the male gaze by showing everything from a woman’s perspective. What was the process for creating the video?

Emily: Right from the get-go, in the beginning stages of performing the song live, I thought this would make a very strong music video. I had a really strong vision for what that would be because there’s something really great and catchy about the song. I could see it translating to a visual narrative. A lot of our identity and our brand is connected to female strength: The songs are sung by three female voices. I thought it would be fun to go bold with our first video, and have the three of us seen in this way. It was go big or go home. I connected with a cinematographer who’s big in the queer community and is a great artist in her own right, and she was excited about creating these short vignettes that grow, evolve, and change as the video goes on. I told Catherine and Casey what I was thinking, and then we just did it.

It’s incredibly empowering to see women expressing agency over their sexuality. How important is it for you, as a group, to espouse that message? Has that been integral to the the group from the start?

Casey: “Herstory” was the first song that Emily wrote for this band, and that has been a genesis of so much material. We’ve tried to take common tropes and turn them a little bit on their heads. Commenting on gender roles, especially the female role, has been a really strong through line since the beginning of the band. It’s amazing to also have that collaboration with our musicians. Our instrumentalists—guitarists, bassists, and pianists—are all wonderful men who understand and support the kind of energy that undergirds the band and our content.

Emily: I would echo that. That’s a big part of what we set out to do. There are a lot of ways we’re communicating feminist ideals that aren’t just about sexuality. I’m really interested in deconstructing a lot of stigma associated with women embracing their sexual power. We’re playing characters in the “Prey” video. None of us go around wearing tiger helmets and pajamas. That would be a dream, but a lot of it was really using the metaphor, embracing these ideas, and doing it in an intentionally theatrical way. “Not Your Woman” is slightly unrelated, but it’s another song we’ve created that’s going to be featured on The Heart Radio podcast. We call it “Herstory 2.0.” It’s kind of a sister of “Prey” because it deals with patriarchy, but not necessarily sexuality.

Catherine: I love thinking about sexuality in abstract terms through the work of bell hooks, Audre Lorde, and Carter Heyward, who’s a theologian, and examining sexuality outside of patriarchy. We had one day to shoot the “Prey” video, and I am not used to performing sexuality for a camera. I’ve done plenty of performing, but nothing like this. It was such an experience, and everybody we worked with was so incredible. We had to embody this thing that we’re always thinking about. That, in itself, was such a lesson for me because a lot of what we talk about when we’re discussing femininity, sexuality, and patriarchy is about embodiment of an experience. It’s not that we set out to be a feminist band, but when we write about what we care about, that’s what it becomes.

Casey: I had a similar experience shooting the video. This is a whole new thing to be performing in front of a camera. I was on a high for days after the shoot because it really was empowering to feel really sexy on camera. Displaying that kind of sexuality as a team with other women—as opposed to the patriarchal tendency to pit women against each other—was so powerful. That’s one of the things that’s so magnetic about when we perform together; there’s such a clear connection between the three of us. That’s contagious, and I think that, in and of itself, is a message.

Tell me more about how Em & the Fates came together.

Catherine: Casey, Emily, and I all met in college, and we actually sang together in an acapella group, and became close friends. It was so embarrassing, but we met as huge dorks in college. We all ended up in New York City, and one night, Casey invited us over to eat dinner and sing for fun. I missed making harmonies with people I love. So, we started playing around with some old folk songs, listening to them and creating harmonies. We realize that was something we were really missing in our post-college lives.

Emily: In tandem with that, I’d been doing a lot of different kinds of performance work since college. I really wanted to do my own cabaret show, and I wanted these girls to sing with me. We basically started this cabaret concept in a nightclub, which informed a little bit of our band’s throwback style. We did a lot of covers of a variety of genres and styles, but a lot of the arrangements had this old school jukebox-type feel. That was the driving sound. We did that show in different iterations over the course of a year and a half.

At one of the shows, I decided to throw in a few original tunes. The platform of that show, which was called “Emily’s Crown Colon Canvas,” made me feel liberated and safe enough to create original content. Our bassist, who is a total savant, played a few of those shows. I called him and told him I wanted to form an actual band with Casey and Catherine, and he agreed. The drummer, Justin, played a bunch of shows with us as well. Other than the guitarist, the band all did the show first, which was primarily covers, but arranged with this vintage-style lens. That ended up informing the music we’ve been creating.

Your music seems to blend old school harmonies with a new age sound. How would you describe your sound? How did you collectively decide on that sound?

Catherine: It’s an ongoing process, and I find that it’s tough to do.

Emily: That’s what so amazing about the creative process. It’s ever-changing in a really exciting way. Our next record will reflect a different version of this particular style. It’s a sort of old school, soul, funk sound that harkens back to the live band, non-synthetic, vintage, sort of Motown-y and golden-age pop and rock sound. Almost of the songs on our record are reminiscent of an older sound, but the lyrics and the sound are contemporary. There’s an intentional juxtaposition and push and pull between the style and content. My favorite kind of music is older. I am drawn to a sound that’s come before, especially in terms of three-part harmonies and a really organic human sound. It’s not digital. It’s not synthetic. It’s all real people singing and playing, which is rare these days. Soul-pop is the best description that simplifies all of that.

There’s a movement of artists who are using crowdfunding platforms, including Kickstarter and Patreon, to fund their work. Your self-titled EP was funded entirely through Kickstarter as well. Does independence from record labels give you some semblance of musical freedom?

Emily: Yes, absolutely. We’re definitely not in a position where anybody is telling us what to do, which is a gift. I haven’t given it more thought other than, Yay! We can do whatever we want. This is so fun. I have friends and peers who are doing a certain type of music, like a friend who’s doing indie pop through a record label, and they’re very much in charge of what he does and puts out. There’s a benefit to that, but there are pros and cons to being independent too.

What can audiences expect from your EP?

Casey: First and foremost, I would say that it’s a feel-good group of tunes. It’s pretty upbeat and offers a lovely sampling of feel-good energy. There’s “Beautiful Life,” a song particularly about radical love and positivity, while “Prey” is a little bit darker and subverts heteronormative gender ideals. “Drive” is more pop and has a simple message about falling in love. “Smoke You,” is similar to “Prey” because it’s pretty much a metaphor about consuming someone—smoking someone like they’re a joint. There’s nothing about female sexuality or empowerment, but the whole album is about hoarding desire and carnality.

There’s a really nice spectrum within the five tunes. And I think it’s a really good summer and fall go-to. I’m very biased, but all of the songs are really catchy and provide something different for different moods, which is why we all sat down for hours to decide what songs to put on the EP. We’ve written a lot of songs, and it was a tough decision, but we all felt really compelled by this grouping. They share a lot and depart from one another.

Emily: There’s also a retro feel. When you hear this EP, you’re going to think of Dreamgirls and gospel. You’re going to think a lot about old school formulas that are not being used as much anymore. You’ll get something a little different than what you’re listening to.

Invest in Em & the Fates:

Listen to Em & the Fates’s music on Soundcloud.

Listen to Em & the Fates on the The Heart Radio podcast. 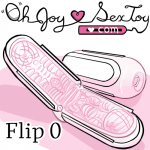 by Erika Moen
Oh Joy Sex Toy is a weekly NSFW comics series that graphically explores sex and sexuality. This week: a review of the new Tenga Flip Zero.