“Am I dead?” are the first words Kesha utters in the video for her long-awaited single, “Praying.” It’s a reasonable question given that the 30-year-old singer has been to hell and back since she released “Timber” with Pitbull in 2013. “Praying” is Kesha’s triumphant resurrection, an opportunity to regain control over her music and her body. Her music is finally hers, not dictated by Lukasz Gottwald a.k.a. Dr. Luke, the producer who controlled her sound and “sexually, physically, verbally and emotionally abused” her for nearly 10 years.

She’s free, and it shows. “Praying” represents Kesha’s journey to creating a spiritually that helped her survive abuse that was ignored at every turn—by her record label, the courts, and a culture that enables abusers at the expense of their victims. The video, which accrued 5 million views in 24 hours, shows Kesha rising from her funeral to “figure out how to fight for herself.”

“My own interpretation of spirituality isn’t important, because we all have our own,” she wrote in Lenny Letter. “What matters is that I have something greater than me as an individual that helps bring me peace. …This song is about me finding peace in the fact that I can’t control everything—because trying to control everyone was killing me. It’s about learning to let go and realize that the universe is in control of my fate, not me.”

“Praying” is also one of Kesha’s strongest musical offerings: The sweet softness of a piano, powerful lyrics about survival, and serenading of a gospel choir draws listeners in, immersing us in her pain. It’s a new beginning for Kesha’s career, as she notes at the end of the video.

“This is just the beginning. I am so happy and grateful to begin sharing all the music I have been writing with the world,” she wrote in Lenny Letter. “I’ve written a record that reveals my vulnerabilities, and I have found strength in that. In the past, I’ve always felt like I was trying to prove something, trying to be someone I thought people wanted me to be, but on this record, I’m just telling the truth about my life. This album is me.”

Being free to be yourself is the most beautiful part of healing. Welcome back, Kesha.

Relevant: Kesha: "This is About Getting Free From My Abuser" 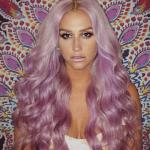 by Sarah Mirk
The pop star posted a statement about the bigger issues behind her legal fight with Sony.