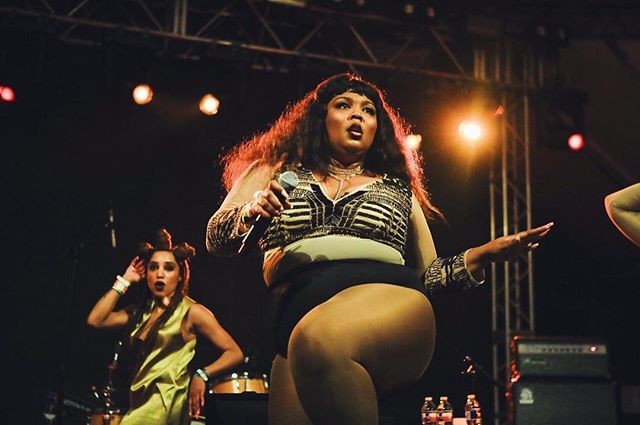 Lizzo and her all-female crew, The Big Girls, onstage at SXSW 2017 in Austin.

There often comes a point when I’m covering the SXSW music festival in Austin each year when I think “OK, I’m ready for this festival to be over so that I can sleep for five days straight, waking only to rehydrate and massage tea tree oil into my battered feet.” The schedule is grueling - more than 2,000 bands play in Austin over the course of five days, with set times overlaid so that my schedule on a given night might have four bands slotted into one 20-minute period, at four different venues around the city. It’s fun, but exhausting. This year, the moment I first said to myself “This festival could be over now,” it was only two nights in. And it’s not because my feet hurt: It’s because I had just seen the best thing I would see all week. No further applicants need apply. Enter: Lizzo, the Minneapolis performer who stole every show she played, and turned me into a blubbering blob of goopy girl-love on the floor of whatever godforsaken club she was playing at the time.

Lizzo (Melissa Jefferson) has been based in Minneapolis since 2011, where she started releasing music in locally-loved hip-jop/R&B groups The Chalice, Grrrl Prty, and Absynthe. She’s been performing at SXSW for four years now, and the hustle has paid off. Lizzo stage show is electrifying. This is a performer whose sense of purpose has crystallized, and every moment of Lizzo’s set is body-positive, sexy, flamboyant, and fabulous. She highlights her body, and the bodies of her dancers (whom she calls The Big Girls), as big and beautiful, both in their bold dance routines and in her lyrics, which are drenched in self-love and affirmation. To give you a further idea of her mission statement, her 2015 album is titled Big Grrrl Small World. Watching Lizzo, being a part of her show, is an experience of being seen and accepted exactly as you are. She calls out audience members, imploring them to be 100% present, having the time of their lives, whether that means staying in their seats or getting up and grinding half to death in front of the stage. I don’t say this lightly: Lizzo could very well be the face of the revolution. She certainly embodies the feminism I want to see in the world. She knows her self-worth, she knows how to take up space, and she commands the attention and adoration of everyone around her. I would say it’s her “moment,” but I hope Lizzo has much more than a moment ahead of her.

Before their set on the second night of a residency at Minneapolis music venue Icehouse rap trio GRRRL PRTY ...