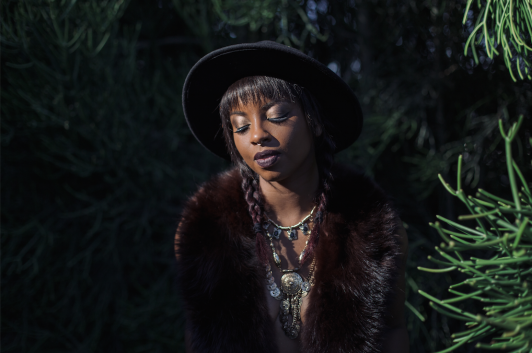 Image courtesy of the artist.

Shaprece wanted to change her mind, so she changed her location. The Seattle singer began her career making electronica with a human heart; the warmth and ease of emotion in her voice overpowered even the most driving of beats on her 2014 debut EP, Molting. It happens occasionally that a vocal performance is greater than the sum of its production effects, but it’s rare in electronica, specifically in trip-hop, for a voice to rise above the fray. And yet Shaprece’s does, and she decided to lean into that ability. Her new record, COALS, came out of a move south to Los Angeles, and everything about the music she makes now has warmed up to match.

What Shaprece hasn’t changed is her penchant for strong, idiosyncratic production. But her vocal work has rounded out even further - this is no longer trip-hop with a heart, this is R&B with an edge. Whether she moved to LA knowing she was going to make music with more heat, or whether the Southland pulled her out of the Seattle Freeze, Shaprece has landed on a formula for COALS that makes good on the promise of her earlier work. Her voice was always going to stand out, but in deciding to soften the production behind her, she’s letting it soar. Perhaps the most telling illustration of Shaprece’s new direction is how chose to debut the new record: live, onstage, with the entire Seattle Symphony behind her.

by Katie Presley
For Inauguration weekend, two mixes: one for self-care and one for fighting the power.