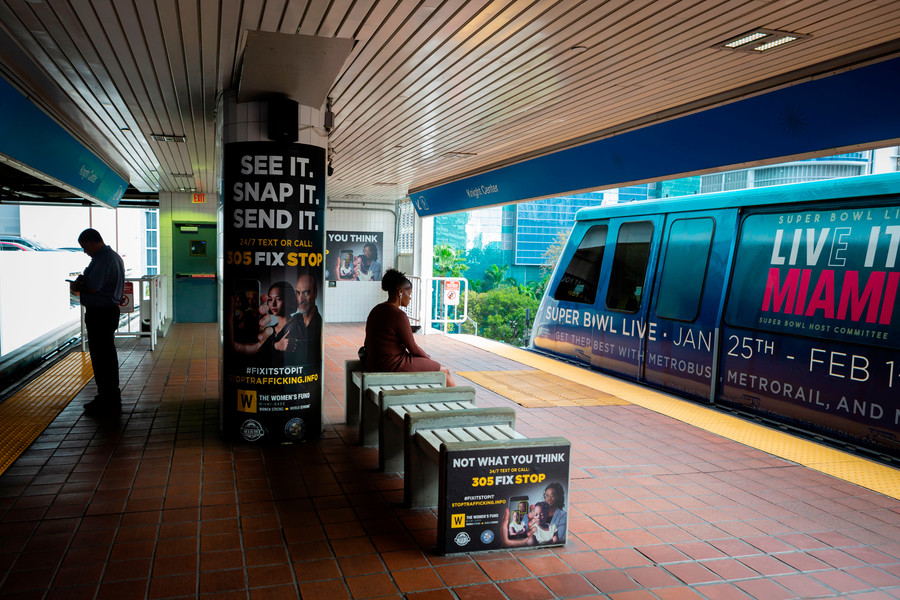 Billboards displaying a campaign against human trafficking are seen at Knight Center Metrorail station as a train depicting the Super Bowl logo arrives at the station, in Downtown Miami on January 9, 2020. (Photo credit: Eva Maria Uzcategui/AFP via Getty Images)

Along with the fanfare of this past  Sunday’s Super Bowl in Miami came dozens of arrests related to “human trafficking.” In the weeks leading up to the game, stings were reported in neighboring Broward, Orange, and Hillsborough counties. Media outlets breathlessly reported as large groups of people were rounded up and arrested—under the auspices of saving women from sex trafficking. This isn’t new. For more than a decade, both the runup to and aftermath of every Super Bowl has been rife with splashy headlines warning of a rise in sex trafficking and arrests on charges related to it.

But if you poke at those numbers, as media outlets and researchers have increasingly done, it quickly becomes apparent not only that they are almost always overblown but the majority of people arrested are sex workers operating consensually. And though large anti-trafficking organizations like Polaris and the International Labor Organization have recently disavowed the idea that traffickers flood cities during large sporting events like the Super Bowl, law enforcement and other agencies continue to use the cover of this endemic sex trafficking narrative as an excuse to execute stings, and far too often, sex workers get caught in the dragnet.

“This time every year, there’s hysteria about sex trafficking at the Super Bowl,” says Alex Andrews, cofounder of the Sex Worker Outreach Project (SWOP) Behind Bars. It has become a cyclical narrative: Anti-trafficking organizations flock to the Super Bowl’s host city, amplifying the anxiety of law enforcement, and subsequent raids end up artificially boosting claims of rampant trafficking.

“This myth has been debunked many times,” Andrews says. But, she adds, “Anti-trafficking is a billion-dollar business.” Even if established organizations claim that trafficking hasn’t increased, that narrative is their revenue, “what they count on,” according to Andrews. And as the public narrative around sex trafficking expands to encompass anyone who sells sex—consensual or not—sex workers are being “saved” by being arrested. It’s gotten to the point where anti-trafficking organizations are reaching out to sex workers through their advertisements to offer help to “women in difficult situations.”

This is an indication of a larger shift: Over the last 40 years, federal, state, and local lawmakers have used the threat of sex trafficking to legitimize crackdowns on consensual sex work. Until 2013, the so-called anti-prostitution pledge required anti-trafficking and anti–HIV/AIDS organizations receiving federal funding to adopt policies opposing prostitution. Though that was struck down, the pledge still extends to international groups receiving U.S. aid, effectively muzzling aid organizations who might advocate for decriminalization abroad. But the groups most likely to receive grant funding from the Department of Justice most often exist in the anti-trafficking space. Many of them are faith-based; most are unwilling to engage with the perspectives of actual sex workers than they are to partner with law enforcement. When allegations of sex trafficking enter the political arena, it becomes politially unviable for lawmakers to critique the “anti-trafficking” position.

Fear around sex trafficking—and the conflation of trafficking with sex work overall, was responsible for the Stop Enabling Sex Traffickers Act (SESTA) and the Allow States and Victims to Fight Online Sex Trafficking Act (FOSTA), a pair of bills passed in 2018. By criminalizing third-party providers (Craigslist and Backpage, for instance) for hosting any and all ads posted by sex workers in the name of stopping trafficking efforts, sex workers have been pushed further to the margins. Their working conditions are less safe and their income compromised, and the looming specter of human trafficking makes it easier for them to be arrested in law-enforcement sting operations. These sting operations, with names like “Operation Cross Country” and “Operation Independence Day,” claim to liberate “victims of sex trafficking” while further criminalizing them. But they tend to play well for law-enforcement agencies, allowing them to appear both tough on crime and sympathetic to the plight of innocent, faceless women.

But the numbers of actual trafficking victims rescued are slippery. In 2011, Nikole Hannah-Jones reported on the thinly sourced claims of Portland, Oregon, dubbed by media as a “hotbed” of sex trafficking, writing that “[L]ittle data is kept locally on the depth of the problem, and the figures cited nationally crumble under scrutiny.” In Chicago, meanwhile, law enforcement mischaracterized hundreds of sex workers as victims of sex trafficking after a sting operation.

Sting operations tend to play well for law-enforcement agencies, allowing them to appear both tough on crime and sympathetic to the plight of innocent, faceless women.

“The narrative is that women don’t have autonomy in the sex industry,” Andrews says. “That everyone who chooses to sell sex is a victim and must be rescued at any cost.” Which is why, this year, SWOP Behind Bars launched the Super Bowl 2020 Sex Worker Bail Out to correct the record while springing arrested sex workers from jail. SWOP partnered with the Woodhull Freedom Foundation, a human-rights organization that fights to affirm and protect sexual freedom; as well as with the LGBTQ Freedom Fund, which posts bond for LGBTQ people who are jailed or in immigrant detention.

“We’re just going to bond ‘em out,” Andrews says. “When they go to court, the bond will also cover their fees and court costs. We hope the defender’s office will be helpful so that some are adjudicated not guilty [and] won’t face prostitution charges on their record.” Andrews notes that the fund will prioritize trans sex workers of color: “They really suffer when they go to jail.”

A prostitution charge makes it nearly impossible to rent an apartment, receive financial aid for school, and access needed government assistance. “It can keep you from getting a lot of stuff,” Andrews says. “And it’s nobody’s business what two consenting adults do on their own time.”

After years of sex worker-led efforts, the argument for decriminalizing sex work is finally breaking through. The argument is built on a foundation of lived experience—the knowledge that incarceration doesn’t solve any problems and in fact, makes things worse for people doing sex work. And as a result, sex workers are leading the charge to decriminalize sex work.

Though the so-called Nordic model, which criminalizes buyers, has been pushed by some groups, Andrews makes the point that the “supply” doesn’t just go away. “The ‘supply’ doesn’t just go, I’m just going to go get a corporate job now,” Andrews says. “They will just be [engaging in] riskier behaviors.” Potential customers start giving false information out of fear, and it makes it even more difficult for sex workers to vet clients for their own safety.

Andrews herself has been arrested 12 times on prostitution charges herself. “To this day, I can hear the sound of the clicking handcuffs,” Andrews says. “The door slamming behind you, the sound of people in physical and emotional pain.” Her experience keeps her passionate about the work, aware of the macro-level policy while being grounded in the bureaucratic minutiae of arrests and court. And for allies? She encourages people to listen to sex workers. “Donate to whomever you like to help stop people from being arrested,” she says. “Help us achieve decriminalization.”

Read this Next: Insult to Injury 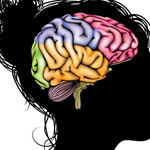 by Sarah Kishpaugh
The issue of brain injuries caused by domestic violence is obviously less media-friendly than other angles.