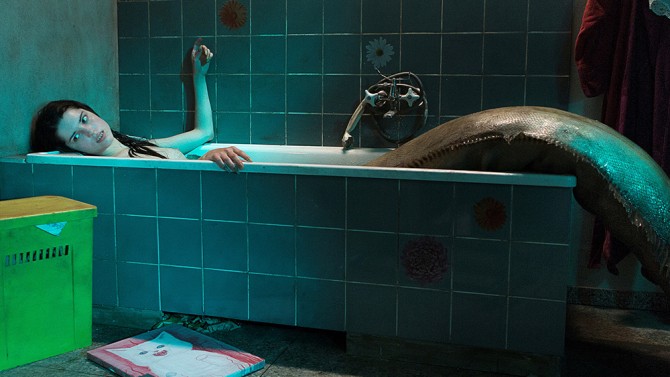 Two man-eating mermaid sisters rise singing from the depths of the Baltic Sea to perform in a surreal nightclub and devour men. The idea that anyone could resist that plot summary boggles the mind. In The Lure, director Agnieszka Smoczynska creates a striking new interpretation of the mermaid myth in which the mermaids don’t forget their darker siren origins. Sure, they might fall in love with human men; but they eat them, too. Silver and Golden become famous as “The Lure,” a mermaid new wave duo that performs at a David Lynchian Polish nightclub. At first the two sisters are just on land to have fun for a while, but their intentions don’t stay so clear. While Golden is having fun eating people and going to punk shows, Silver becomes more attached to her new human life.

DGH: I think Britt and I are on the same page about our enthusiasm for horror mermaids—we couldn’t wait to see this film.

BA: I mean, it’s got teen romance, misandry, cannibalism, and synchronized dancing—what’s not to love?

DGH: In their first song (and the first time we see the mermaids try to lure some men to their deaths), Silver and Golden sing: “Help us come ashore/ no need to fear/ We won’t eat you, my dear.” They are so blatant about their nefarious plans and men still flock to them! Great stuff.

DGH: I really enjoyed how unperturbed everyone was by the mermaids. The owner of the nightclub sees Golden and Silver transform from teenagers into mermaids before his eyes and is only delighted!

BA: Yes! I love when in a magical/monstrous narrative universe extraordinary events (like finding out there are two teenage mermaids hanging out in your nightclub green room) are just accepted without any struggle about whether or not what people are seeing/hearing/feeling is “real.” The friction that occurs when the magical mixes with the mundane is so great and clearly the filmmakers and actors had fun with it.

I really enjoyed how fucking weird all the musical performances in the club were, like we had fallen into some kind of underground eastern bloc VH1 alternate universe.

I also loved how Gold and Silver were both feral and glam, all sequins and scary siren-teeth.

DGH: Yes, the musical numbers were fantastic! Some were like choreographed musical numbers, some were like music videos. The Lure perform in giant martini glasses and in mosh pits; they eat the hearts of men; they have a feral glint in their eyes and it shines in their performances.

Golden and Silver talk to each other in a mermaid-only frequency of clicks and growls that is sometimes subtitled for the audience, so we’re often left to wonder what else the sisters might be communicating about at a higher frequency. The way they so easily move between psychic siren threats and razor-sharp teeth to posing for photos and doing back-up choreography is really exciting to watch. I absolutely did not know what to expect at any moment. Could be another song; could be another murder. And the surreal nature of the premise itself heightened that suspense.

BA: I really did not hate anything about this movie. Except Silver’s romantic choices.

DGH: When Golden says she’s not mad (about being dumped and abandoned for dead) and bites off her drummer’s thumb. That’s not a spoiler because it’s in the trailer. Golden’s moody mer-teen bathtub song and her need to embrace her punk mermaid inner-self.

BA: That thumb-biting moment was so, so great. Constant casual psychic discussion about whether or not to eat their lovers. Triton as a manarchist punk singer. Golden’s revenge scene.

DGH: I was surprised by the “Little Mermaid” details that began to pop up halfway through the movie—the horror and glam distracted me from the source material! Silver wants to get rid of her tail, but doing so means losing her voice. Silver wants to get married, but if the man she falls in love with marries someone else, she has to eat him or she’ll turn into seafoam.

Hans Christian Anderson’s original “Little Mermaid” has a similar plot, but unlike Ariel in the Disney film, the real little mermaid does not end up with her true love. In the original story, the little mermaid’s sisters give her a knife to kill the prince the night he marries another, but when she refuses to kill him, she turns into sea foam. But since the little mermaid did the right thing (according to Anderson’s Christian theology, which is deeply infused in each of his stories), the little mermaid gets to earn the chance to have a soul by doing good deeds for mankind for 300 years. Then, if she’s good, she might get to go to heaven. Forgive me if I prefer the life of a man-eating mermaid to that one.

BA: Yeah, fuck 300 years of service, I’ll stay a man-eating siren every time. I thought the movie did such a great job balancing the fantasy elements of the fairy tale with a grittier contemporary setting. I especially appreciated how director Agnieszka Smoczynska made use of the grotesque as a means to push back against the patriarchal morality of the original story. The result is a really bold, timely critique of both externally imposed and internally assimilated limitations on women’s bodies and behavior at a time when we’re seeing the return of fascism on a global scale.

DGH: Yes! Silver and Golden are like two sides of the same mermaid coin—Silver’s storyline mirrors that of “The Little Mermaid” (she wants to be human; she wants legs; she wants love) while Golden has no interest in trifling men and would rather stay a punk siren. It’s the grotesque and surreal nature of this horror-comedy that ultimately indict that Hans Christian Anderson patriarchal morality. Man-eating sirens forever!