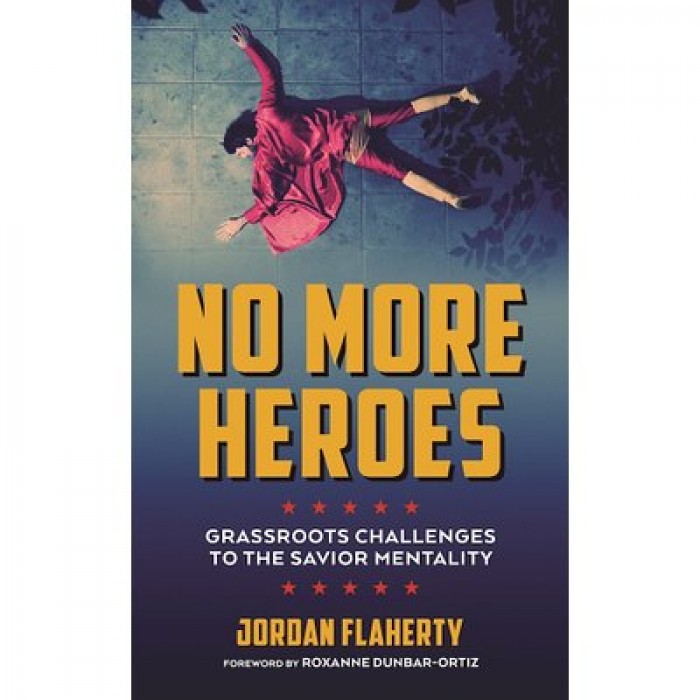 Jordan Flaherty’s insightful new book, No More Heroes: Grassroots Challenges to the Savior Mentality, is both an excavation of the deep roots of the white savior industrial complex and an informative look at how the savior mentality gets expressed today in everything from voluntourism to Teach for America and anti–sex trafficking movements. With whip-smart analysis, Flaherty helps us identify the real damages inflicted by saviorism while providing helpful guidelines so those of us who hold privilege can become stronger allies in the movements for social justice.

The savior mentality is “as old as the crusades and as enduring as colonialism,” and is as other writers, such as Paul Kivel, have pointed out, inherently linked to Christian hegemony. From the distant past to the present, colonizers like Christopher Columbus have declared their intention to “save” or “convert” whomever they encounter while they pillage and ethnically cleanse their way around the world. In Flaherty’s words: “[T]he most violent massacres are often portrayed as the efforts of virtuous men to rescue women and children.” We see this in the United States’s justification for invading predominantly Muslim countries with rhetoric about “saving” oppressed Muslim women.

Born into privilege and most often white, today’s progressive saviors believe in their inherent superiority and refuse to listen to the people they are supposedly serving. Crucially, they lack imagination and structural analysis and therefore often end up strengthening the systems that they claim to be working against. While our capitalist culture insists that individual heroes instigate societal change, change happens through the hard work of people in grassroots movements, such as the Movement for Black Lives, the Arab Spring, and the Occupy movement. Flaherty’s point isn’t that saviors are bad people, but that our capitalist system supports and rewards saviorism, which we can help uproot by supporting movements led by the people most impacted by the issues being addressed.

Flaherty creates a damning portrait of anti–sex trafficking work, which inflicts incredible damage on the women it purports to help. He devotes a chapter to a powerful critique of Nicholas Kristof, the journalist who built his career out of saviorism by branding himself with “Half the Sky,” the name of one of his books, his documentary, and his organization devoted to fighting international sex trafficking. Anti–sex trafficking NGOs, like Kristof’s, actually push women into low-paying and dangerous jobs in the international garment industry. Nike and other multinational corporations support Half the Sky because their success relies on the availability of women’s cheap labor, so Kristof ends up “saving” women by locking them into exploitative jobs.

Rescuing women, Flaherty argues, is the world’s oldest justification for male violence. Since at least the 1800s, white upper-class men and women took it upon themselves to rescue “fallen” women by acting in concert with the criminal justice system to control the lives of poor women. Since the 1970s, anti–sex work feminists have joined forces with conservative, right-wing, anti-sex crusaders to frame all sex work as “sex trafficking” and, more recently, “modern slavery.” These “carceral feminists” turn to the criminal justice system to solve gender violence and end up criminalizing marginalized populations.

Intersectional feminists, led by feminists of color, argue that carceral feminism co-opts the term slavery by separating it from the historical and ongoing Black-led struggle against racist state violence. Instead of reinforcing state interventions into Black and other vulnerable people’s lives, intersectional feminists encourage community responses to gendered violence outside of the racist criminal justice system. Sex workers themselves, with groups such as the Sex Workers Outreach Project (SWOP), complain that the anti–sex trafficking movement exacerbates police exploitation of sex workers’ problems, including sexual harassment and assault. As Flaherty emphasizes:

“The only true way to ‘rescue’ women from selling sex is to change a system in which selling sex is the best option available for many women. Through a century of calls to save victimized women, every new reform still leads to abuse, arrest, and prison for the women most in need. In part, this is because no matter what anti-trafficking activists say about concern for women, they are okay with some ‘deserving’ women spending time behind bars.”

In other words, the root cause of sex work is poverty, which is a state-generated problem; the state pushes people into sex work by denying them access to a safety net and then arrests them as sex traffickers. Challenging the system would mean challenging capitalism, which is a daunting task. It is much easier to engage in a “war on sex trafficking,” which, much like the War on Drugs, ends up imprisoning the people it aims to “help.” Anti-trafficking efforts have become so broad that they target everything from sex work itself to living with a sex worker to running a website advertising services.

Flaherty gets to witness firsthand how “saving” women is a euphemism for arrest and coercion when he visits Dr. Dominique Roe-Sepowitz, an associate professor at Arizona State University’s School of Social Work. Consumed with moral panic about sex work, she spearheads Project ROSE (Reaching out on Sexual Exploitation), a collaboration between her department, police, and prosecutors. As she tells Flaherty:

Teeming with disgust and judgement, Roe-Sepowitz collapses sex workers with sex work. However, the reality is you can never not have done any job that you did. I “can never not have” worked at a shitty telemarketing job, but I don’t define myself as a telemarketer, and I don’t believe that folks who’ve done sex work will always and forever identify with that work if they no longer wish to. Using her academic credentials to bolster her prejudice, Roe-Sepowitz gets to decide what’s “freaky” and “weird” and then influence policy based on her biases.

For two weekends of the year, Project ROSE sends out over 100 officers to round up sex workers and bring them into a church, where they are forced to meet with police and prosecutors. They aren’t arrested immediately if they agree to stay and meet with social service agencies, but if they choose to leave, they get court dates. If they don’t complete the program, they also end up in jail. Flaherty witnesses women in handcuffs being corralled in a church, and some were sent from there directly to jail because they weren’t eligible for the program due to a warrant or too many convictions.

Women who stay at the church are forced into these conversations with prosecutors and police where social services are linked to the carceral state. The women Flaherty speaks with don’t feel “rescued”; many feel like they are being kidnapped and coerced. Roe-Sepowitz justifies this control with her condescending version of tough love, confident that she knows what’s best for these women: “[T]hey do get handcuffed…[W]e’re not kidding. This isn’t just free food and free clothes and some services. This is a real issue and you’re gonna get in trouble if this continues.”

Flaherty speaks to sex worker activists in Arizona who are fighting the work of Project ROSE, including Monica Jones, a Black transgender woman who has faced endless harassment from police and arrest. This is partly due to an Arizona law that prohibits “manifestation of intent to engage in prostitution,” which means that cops can arrest women for pretty much any reason, including, as Jones puts it, “walking while trans.” As part of the Phoenix branch of SWOP, Jones helps warn sex workers about upcoming sweeps and participates in protests outside Project ROSE events. She points out that the arrests coming out of Project ROSE make it harder for sex workers to ever leave sex work because they end up with criminal records.

Helping sex workers does not mean viewing them as victims and sending in the state to “rescue” them. As with any other struggle, if we’re interested in improving their often dangerous working conditions, we have to heed and support the demands of the workers themselves. We must stop reinforcing a racist, sexist system of moral judgement and punishment and instead advocate and work toward systemic change. With No More Heroes, Flaherty succeeds in creating a roadmap for unlearning the savior mentality by following the lead of the most vulnerable people in the fight for liberation. 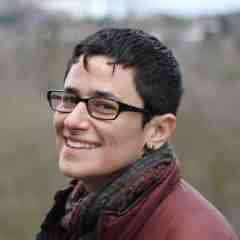 I think that the passe notion of rich 'knowledgeable person being a saviour does need debunking. Society has changed. Attitudes can be stupid ignorant and very transparent. It is a wally ignorant thing to do.

But on my fbk page I posted:

Look. Honey. I am not superwealthy. But I do have a super background. It 's 8000 years old and UNESCO.

But I also have an IQ bigger than my background (per say).

PLEASE be careful how u interpret social field. I for one am just a private individual going about my day. Though I find that awful people who are ignorant or stupid do - AND BELIEVE ME THEY R FROM ALL WALKS OF LIFE - persistently invade space. As far as i am aware its more bad manners, obnoxious behaviour and being misled by an unscrupulous peergroup than anything to do with 'saviouring.'

Believe me the contempt for ignorance grows unmeasurably, with articles like these. With bad behaviours more so. They are in that sense deeply devisive.

Believe me. On any level. Noone is trying to save you. Only you can do that for yourselves.

STOP JUMPING ALL OVER PEOPLE WITH PRESUMPTION. People are just getting on with their own.

Communication wont happen if u r abusive, demeaning, judgemental, stereotypicalising, patronising and obnoxious. Most of all WRONG.

Also we are all entitled to be who we are. (Woo hoo for individualism) We all came from somewhere remember.....

End of day social environment is about socialising. Individually we are what we are.

Yes. We are shaped by our thoughts opinions ideas minds. But false assumptions get u nowhere.

Your article is a very Libertarian take on the subject.

Relevant: Spend & Save: The Narrative of Fair Trade and White Saviorism 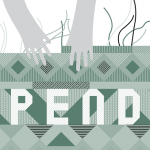 by Bani Amor
You know the saying: One woman’s day-to-day struggle is another woman’s passion project.