Very OnlineDistilling RBG into a Meme Warps Her Legacy 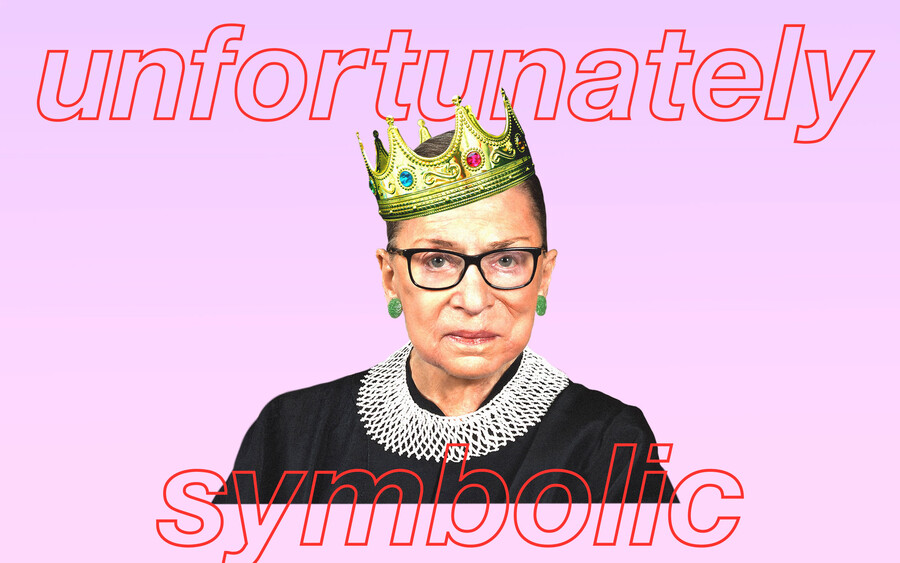 Following the recent death of Supreme Court justice Ruth Bader Ginsburg, different people mourned the heartbreaking loss—and the terrifying shifts to come if Trump is enabled to fill her seat on the Supreme Court—differently. Some people penned thoughtful tweets about her legacy; others took to Instagram to share their favorite Ginsburg moments; and women’s-media outlets shared illustrations and popular quotes. Many donned their Ginsburg collars and pins, finding that it helped them feel connected to an important “anchor” in their feminist journey. It feels impossible to mourn Ginsburg and speak to her legacy without recognizing the cultural shift that propelled her from simply a justice we could generally root for—even though she was not at all perfect—to the larger-than-life pop culture icon known as the Notorious RBG.

The honorific—a nod to the late rapper Notorious B.I.G.— was bestowed upon Ginsburg in 2013, when New York University law student Shana Knizhnik created a Tumblr, still active today, called Notorious RBG. The blog is captioned, “Justice Ruth Bader Ginsburg, in all her glory,” and its menu comprises links to buy t-shirts and other RBG merch, information on publicity and speaking requests (presumably for Knizhnik, rather than Ginsburg herself), and purchasing info for the Tumblr’s companion book. Notorious RBG: The Life and Times of Ruth Bader Ginsburg was written by Knizhnik and journalist Irin Carmon and published in 2015 by HarperCollins. The book is “more than just a love letter,” according to its marketing blurb; rather, “it draws on intimate access to Ginsburg’s family members, close friends, colleagues, and clerks, as well an interview with the Justice herself.” It’s the sort of book that one would display proudly on their coffee table, and perhaps take a stylized photo of for Instagram. Even if you knew nothing about the Supreme Court, Ginsburg’s sudden transformation into a pop culture must-watch meant that she was no longer just a justice. She was a celebrity. And, perhaps unsurprisingly, the latter carried more weight.

It was the name that gave us something to grasp, even if we weren’t personally all that well acquainted with Ginsburg’s political legacy. We didn’t need to know that she made notable decisions and dissents on the Supreme Court, or that she was a codirector and cofounder of the ACLU’s Women’s Right Project, or that she spent nearly 30 years fighting discriminatory laws. The image of Ginsburg with a tilted gold crown on her head became the foremost image the pop culture–acquainted among us came to associate with the justice. You didn’t have to know her face; you didn’t have to know her work; you just had to know the trend, clicky and easily digestible as it was and is. Notorious RBG became less a human being than a shorthand you could use to signal your own feminism and commitment to women’s rights. And, of course, she became something to purchase.

There have been a wealth of products created by a wide range of people both in honor of and to capitalize on Ginsburg’s stature and legacy. The aforementioned Tumblr’s store includes screenprinted t-shirts and hoodies; some have deemed the merch offensive; others believe its the perfect gift for feminists. Every year, gift guides across women’s media include a few Ginsburg-inspired items, with some creating lists specifically for the Ginsburg fan in your life. On Etsy, you can find sweatshirts with Ginsburg’s face sold alongside MAGA merch. The Trump campaign itself has already started selling shirts in an attempt to capitalize on Ginsburg’s passing, with the t-shirts reading, “Fill That Seat: Make America Great Again.” Some creators handcraft RBG merchandise because they adore her, and want to share her messaging far and wide. Having her words nearby on a poster, or her face on a favorite coffee mug, feels like an intimate connection to someone who makes them feel supported and seen. Others create Ginsburg merch solely for the money, and have no qualm about selling cheap, screen-printed t-shirts in her likeness. They hawk it all. Several shops sell prayer candles bearing the image of the justice, who was Jewish, in place of a traditional saint.

The fandom surrounding Ginsburg has been often critiqued. In 2018, Politico editor-in-chief Peter Canellos wrote “Why We Should Worry About the Cult of RBG.” “The truth is, until recently, Justice Ginsburg wasn’t particularly noted for her influential dissents, any more than, say, fellow Justices Elena Kagan or Stephen Breyer,” Canellos explained. “But in the larger Ginsburg mythology, she’s a symbol of everything that’s foul and corrupt in Trump-era Washington; her history as a fighter, her constancy, her aged wisdom all combine to make her a kind of priestess for a younger generation.” In July, Taylor Trudon worried that the memeification of Ginsburg made it impossible for her to let us down, which drove her to work harder than she ever should have had to. “I’m mad that she is in a position where she likely feels she can’t step back because the stakes are too high,” Trudon wrote in The Lily. “I’m mad that instead of outrage, our collective response is once again, a sigh of relief: ‘Yas queen! RBG will save us all!’”

At some point, we have to stop stanning RBG, and start figuring out how we can continue her fight.

Others had concerns specifically about the mapping of Ginsburg onto that of Notorious B.I.G. It felt iffy to merge the two, and to mask the legacy of the Black rapper with that of the white justice. “Don’t get me wrong, I love me some Ruth Bader Ginsburg, but the term, ‘notorious’ and the image of her with a crown on her head, used for the book’s title, cover image, and in subsequent marketing of the [recently released] documentary is problematic,” wrote Dr. Leeja Carter, who studies contemporary representations of Black women’s strength, in a 2018 blog post. “Why? Because while it characterizes her trailblazing and iconic work, it also whitens the origins of ‘notorious.’” In the wake of her death, our amped-up digital response to Ginsburg feels increasingly and unfortunately symbolic. If you share a graphic or a quote about her on social media, it feels like you’re taking a “basic” approach to politics: You’re just another liberal woman who was sucked into the cult of her fandom.

If you critique her, you’re being cruel by attacking a woman who’s hardy been dead for a week. The nature of her celebrity is such that the pendulum swings back and forth with little willingness to pause and reckon with the fact that we are just people reflecting on the legacy and life of another person. “Ruth Bader Ginsburg will always be the court’s first pop culture icon, for better and for worse,” wrote Bitch cofounder Andi Zeisler. “As dubious as that distinction is, it helps ensure that those inspired by her won’t always have to shoulder a burden that should never have been theirs alone.” We shouldn’t stan Ginsburg, but we can recognize our gratitude for her material impact with a few tweets or a donation in her name. We can critique her across social media and recognize that she did more good than many of us ever will. In death, the memeification of Ginsburg fails her twofold: On one hand, it feeds into criticism that should be of our response to Ginsburg, rather than her own ethics and personhood. She didn’t name herself Notorious RBG—that’s on us.

On the other hand, it distills her down into yet another icon, the source of two or three quotes that will be recycled over and over. What will we remember of her legacy? Will it be her work and her tangible, material impact on women’s rights? Or will it be that image of her with a crown upon her head or the viral meme of her working out? “The danger in our worship [of] Ginsburg is that we view her as an unstoppable force, when in reality, she’s not immortal,” Trudon wrote. “Like all of us, she is a human being trying to survive and yet, unlike most of us, she can’t afford to take a break when she’s ill. She’s not allowed to take the time to heal. She’s not allowed to rest.” Ginsburg deserved more than to have to work until her dying day, and, in death, she deserves more from us than our impulse to share the same quote on her birthday every single year as we’ve done with other icons who have passed. She isn’t, and wasn’t, a prayer candle or a coffee table book. At some point, we have to stop stanning, and start figuring out how we can continue her fight.