No Question, “Seduced” Is the Superior NXIVM Cult Docuseries 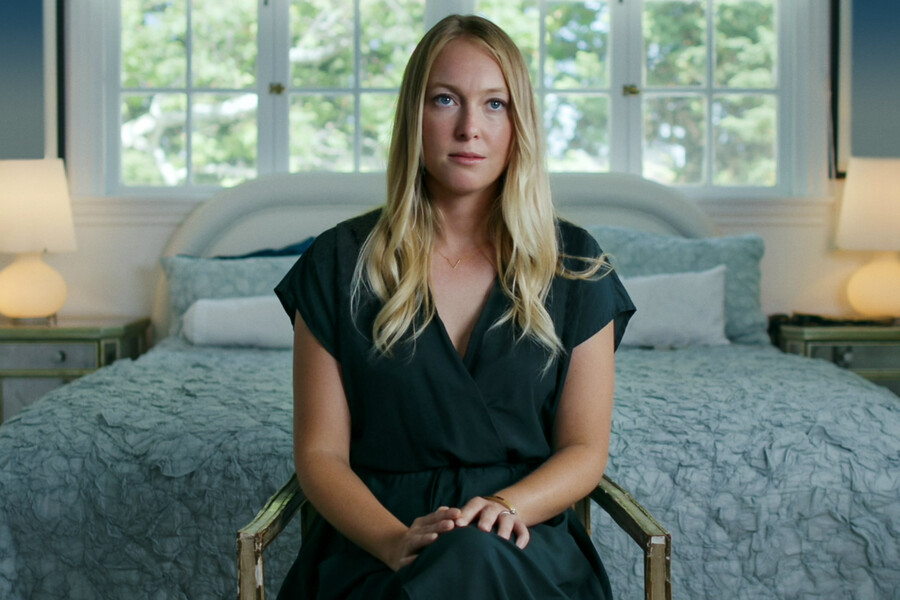 India Oxenberg in Seduced: Inside the NXIVM Cult (Photo credit: Courtesy of Starz)

At first, NXIVM was inscrutable to me. I couldn’t interpret its narrative or follow its logic, but here’s what I could piece together: NXIVM was an Albany, New York–based multilevel marketing company, founded in 1998 by self-proclaimed genius Keith Raniere, that promised members personal growth and professional development. NXIVM was also a cult, a pyramid scheme, and a front for a sex-trafficking operation. I knew all about cults, having spent many evening hours mainlining documentaries about Scientology and Jonestown. I was also familiar with pyramid schemes—like a good citizen, I’d watched that one episode of Last Week Tonight with John Oliver. And sex trafficking demanded no further explanation. But the NXIVM gestalt still mystified me: I understood the parts but not the whole.

In recent years producers, podcasters, and publishers have tried to assuage this confusion: As a result, NXIVM has become the cult that launched a thousand media products. Two of the most popular ones are dueling docuseries, HBO’s The Vow and Starz’s Seduced: Inside the NXIVM Cult, which were released in August 2020 and October 2020, respectively. Both were helmed by filmmakers with loose personal connections to NXIVM (The Vow’s codirector Jehane Noujaim took some NXIVM classes herself and Cecilia Peck, cocreator of Seduced, was once unsuccessfully targeted by NXIVM recruiters), and both shows attempt, with varying degrees of success, to capture the cult’s rise and fall in all its convoluted grotesquerie. The most difficult part of NXIVM’s story for the filmmakers to tell is that of DOS, a subgroup within the cult that can only be described as a sorority-cum-sex-ring where women, designated as “masters” and “slaves,” were blackmailed by one another, coerced into having sex with Raniere, and branded with Raniere and coconspirator Allison Mack’s initials.

Despite their superficial similarities, the lenses through which these two docuseries explore NXIVM and DOS are crucially different. Where The Vow provokes frustration, Seduced provides insight. Where The Vow engenders in viewers feelings of superiority, Seduced encourages empathy. And where The Vow is essentially interested in the apostasy and guilt of NXIVM defectors, Seduced is more concerned with the abuse and resilience of DOS survivors. I watched The Vow first, and it immediately became appointment viewing for my mom and me. We live on opposite coasts, so we sent real-time commentary over text during each episode. My mom’s style of commentary was exclamatory: “Jeez!” “Ew!” “We would totally have left!!!” Mine was more interrogative: “How could any woman sit through this presentation without vomiting?” “Why would women pay to listen to this misogynistic crap?” These are the kinds of reactions The Vow primed us to have; they’re also the wrong ones.

The Vow focuses mostly on the experience of documentary filmmaker Mark Vicente, an early NXIVM proselytizer who became an executive within the organization—and a Raniere flunky. Vicente recorded much of the show’s footage while he was the cult’s semiofficial videographer. Though Vicente diligently documented his time in NXIVM, he’s a fundamentally unreliable narrator who once fancied himself Raniere’s anointed apostle. The Vow’s other prominent figures include Sarah Edmonson, a former high-ranking NXIVM and DOS member, and actress Catherine Oxenberg, whose daughter India was involved in both NXIVM and DOS. Together, Edmonson, Oxenberg, and Vicente work to expose the cult’s abuses through publicity and legal action. All three of them harbor immense guilt: Edmonson and Vicente for recruiting countless people into NXIVM and abetting Raniere’s crimes, and Oxenberg for introducing her daughter to the cult.

The documentarians behind The Vow are most interested in the shame and responsibility that NXIVM’s whistleblowers feel. They’re also uninterested in: coherent timelines; the complicity of Edmonson, Vicente, and others; the logistics of DOS; and the extent of Raniere’s crimes both within and outside of NXIVM. By the end of The Vow I understood how bad and stupid NXIVM defectors felt, but I still didn’t understand how someone like India Oxenberg, oft-referenced but conspicuously absent from The Vow, remained devoted to DOS for so long—how any woman could become so inured to the denigration, subjugation, and abuse built into NXIVM. Then I watched Seduced. India, who’s the docuseries’ executive producer, figures prominently as its the de facto narrator, and her voice is one among a chorus of other women who were directly victimized by Raniere and his ironclad grip on NXIVM and DOS. Seduced consults articulate cult experts and foregrounds the stories of survivors, rather than ceding so much narrative control, as The Vow does, to those who wielded considerable power within the organization—and could be considered exemplars of evil at its most banal. Ultimately Seduced helped me better see NXIVM for what it was: the perfect coalescence of misogyny, patriarchy, biological determinism, and late-stage capitalism, cloaked in the language of self-help and feminism.

India’s experience as recounted in Seduced illustrates the cult’s fundamental bait and switch. At an introductory NXIVM meeting for recruiting new members, India saw in attendance “strong, powerful women like Rosario Dawson,” which she says “impressed” her. She interpreted NXIVM as a good networking opportunity. Speakers espoused late-capitalist tenets like rugged individualism and bootstrapping. Through NXIVM’s curriculum, which encouraged self-reliance, self-improvement, and self-optimization, any person (with sufficient financial means) could hack their emotions and lifestyle to maximize their success. Once India joined NXIVM, she was invited to participate in Jness, the organization’s “women’s empowerment program,” which billed itself as “the first women’s movement that was created by a man”—as if that were its selling point. Meetings generally took the form of Raniere lecturing women about their inherent defects (women are naturally selfish, irrational, dependent, and hyperemotional) and the incontrovertability of gender roles (men think, women feel; men are innately polygamous, women monogamous; men must protect women). Women paid to attend classes where they were required to endure verbal assaults from male NXIVM members and recite aloud, “I will not choose to be a victim.”

Jness purportedly aimed to help women overcome the guise of the damsel in distress—their tendency toward chronic victimhood—in order to become truly independent. Most important to remember, Raniere said, was that “abuse”—or what any woman might perceive as abuse—was in fact a social construct. Rather, Raniere asserted that there is no such thing as abuse and to claim someone has abused you is in itself abusive, which cleverly allowed him and others to cause harm with impunity. As Seduced lucidly demonstrates, this “women’s empowerment program” manipulated women in two ways: It sowed in them internalized misogyny, and it discouraged (if not impaired) their critical thinking. By the time these women were recruited into DOS, their self-perceptions were too warped and their analytical minds too corroded to refuse. At that point, it was impossible for them to give informed consent.

Unlike The Vow, Seduced clearly articulates how DOS was pitched: as an exclusive, insular group of women supporting and bettering one another. On its surface, India says DOS was “very much about having this rigorous lifestyle,” founded upon what Jia Tolentino might call the late-capitalist imperative for women to “always be optimizing” by engaging in (mostly physical forms of) “self-care.” Entrance into DOS required “collateral” (compromising material ranging from nude pictures and house deeds to false testimonies against loved ones) and upon admission women entered into “master-slave” relationships. Masters coerced their slaves into activities like adopting dangerously restrictive diets, being branded with a cauterizing pen, and having sex with Raniere. An estimated 150 women were enlisted into DOS, most of them white, which makes it difficult to ignore how DOS severed the language of slavery from its historical and racial significance.

NXIVM and DOS become more legible when we draw connections between these sequestered worlds and the real world. NXIVM was rooted in a false promise of meritocracy—that the members rising in the ranks were the best ones—when really, as cult scholar Janja Lalich notes in Seduced, Raniere was pulling the strings and advancing the “beautiful, slender women” whom he planned to exploit. And those women who were “advanced” into DOS felt trapped in part because they’d developed what psychologist Martin Seligman calls learned helplessness, ceding control of their situations when repeatedly forced to endure painful, uncontrollable stressors. The false promise of meritocracy is at the core of many real-life institutions, from higher education to capitalism itself, and many marginalized folks develop a sense of learned helplessness after years of experiencing systematic and systemic oppression within these institutions. Seduced never explicitly draws these connections, but tacitly shows how the power dynamics within NXIVM might reflect those within our own broader culture.

Rather than ceding narrative control to Keith Raniere’s former yes-man, Seduced hands the reins to survivors of Raniere’s abuse.

By the time I finished Seduced, I felt The Vow had practically committed narrative malpractice. Rather than ceding narrative control to Raniere’s former yes-man, Seduced hands the reins to survivors of Raniere’s abuse. The Vow, wittingly or not, mostly reveals the self-absorption and self-delusion of NXIVM members. “What is wrong with these people?” I often found myself thinking. Seduced, on the other hand, explicates the societal and psychological mechanisms that created an environment where vulnerable women were led to put themselves in harm’s way. NXIVM’s ringleaders—including Raniere and his many female accomplices—have now been arrested for their crimes. Their trials have attracted rabid media attention, thanks in part to NXIVM’s sensationalized (though not altogether inaccurate) reputation as a “sex cult.” But equally scrutinized by the media is the abundance of women who abetted Raniere. A sex ring run by women is of course the perfect cover: How could Raniere be abusing women if so many of his collaborators and followers were women? “[Raniere] was the wolf,” says one survivor in Seduced. “We were the sheep’s clothing unknowingly.”

But Raniere’s direct collaborators—like actor-turned-henchwoman Alison Mack, NXIVM cofounder Nancy Salzman, and the Bronfman heiresses who bankrolled him—pose a much more intractable question about complicity. Having watched both The Vow and Seduced, I can still only speculate why Mack, Salzman, and the Bronfmans not only tortured fellow women (Financial gain? Positions of authority? A sense of purpose?) but used the common cause of feminism to do it. They promised a sisterhood rooted in self-determination, where women could build character, hone life skills, and develop their inner strength, all while nurturing the growth of fellow members. It’s hard to know how much Mack, Salzman, or the Bronfmans actually believed any of the false feminism they peddled, though intent is hardly relevant when the resultant damage is so severe. Reflecting on her time in NXIVM during the finale of Seduced, India asks “How do you even begin to explain something like this?” Seduced ekes out many more explanations than The Vow, but some answers—why people hurt other people the way they do, or how women could treat one another so cruelly—might always feel out of reach.

Read this Next: The Eerie Pop Culture Appeal of Cults