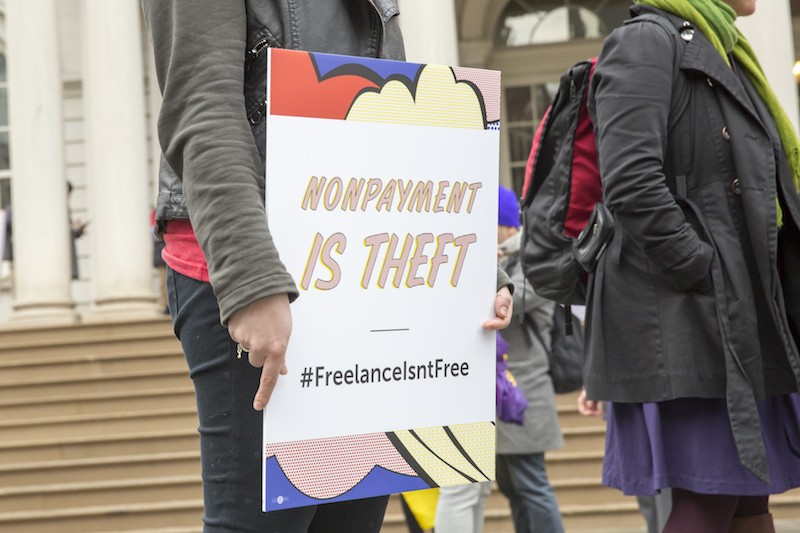 On Thursday, October 27, freelancers throughout New York City had cause to celebrate. By a unanimous vote, all 51 members of the New York City Council passed the Freelance Isn’t Free Act. It’s the nation’s first legislation protecting freelancers from non-payment.

As any freelancer can tell you, late payment—or sometimes even no payment—can be all too common.  In 2015, the Freelancers Union surveyed more than 5,000 freelance workers across the nation. It found that 71 percent of freelancers had experienced problems getting paid at least once during their career. Payments aren’t pennies, either: The average annual loss per freelancer is $6,000. To add insult to injury, many reported that clients frequently offer payments that are smaller than the initially agreed-upon amounts.

This is what has happened to JustRaymona, a patternmaker in the fashion industry who has been freelancing for the past 23 years. “I get contracts,” she told members of the City Council at a meeting I attended in February 2016. “But somewhere along the way, I’m told they can’t pay me or they can’t pay in full.” During Fashion Week in 2015, one of her clients paid her only half of their agreed-upon fee, which kept JustRaymona from not only paying her rent on time, but also from hiring assistants. Instead, she worked 18-hour days. At the end of Fashion Week, she received a check for $355, about 15 percent of the $2,300 she was owed. Her client didn’t pay her in full until four months later.

That story isn’t unusual. Latefa Harmon, a professional development consultant for corporations and large nonprofits as well as a mother of an adolescent boy, told the City Council, “I can name payments that I haven’t gotten for [jobs in] 2008!”

Randy Gener, a freelance editor, writer, and drama critic, is owed payment from several publications. In 2014, he was attacked in what he described as a “racist, anti-gay hate crime” which left him hospitalized and having to undergo four surgeries. “I still owe $3,700 in ambulance fees,” he testified. 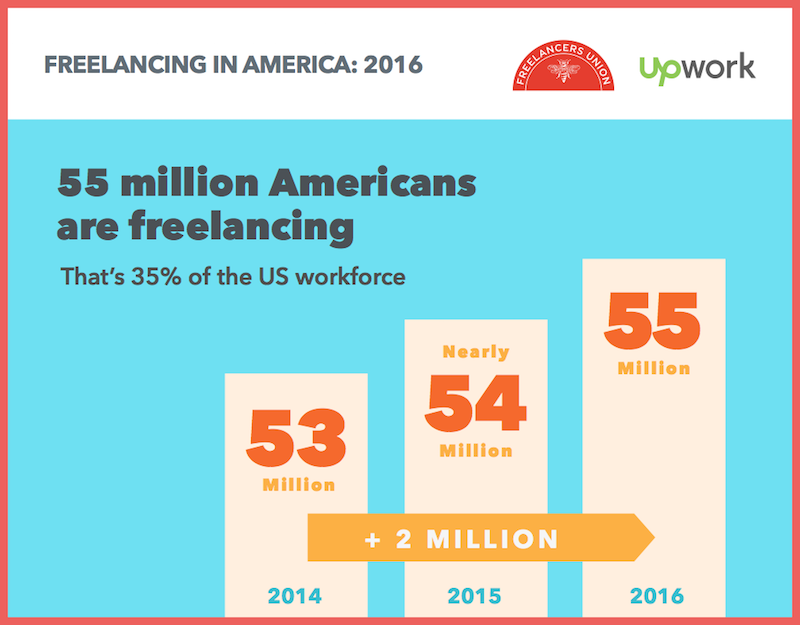 Graphic via the Freelancers Union.

As Sarah Grey wrote in her Bitch article “Between a Boss and a Hard Place,” traditional full-time employment is giving way to a gig economy where more people work as freelancers. “As employers cut down on benefits and flexibility, more and more people, especially parents and those with chronic illnesses or disabilities, are getting squeezed out of ‘regular’ workplaces and into the freelance economy,” wrote Grey. “What they find there is a whole new labor market that comes with a fresh set of obstacles—and some benefits, too.” One of the big obstacles is getting employers to actually pay for work in full and on time.

Until now, New York’s 1.3 million freelancers have had little recourse other than going to court. But that involves paying an attorney and, even if the court decides in their favor, doesn’t guarantee that the client will pay up. In New York City, where freelancers make up 38 percent of the city’s workforce, only five percent take clients to court.

That’s now changing. Under the Freelance Isn’t Free Act (or 1017-C), introduced by Councilmember Brad Lander, freelancers now have greater protections. For example, freelancers must be paid no later than 30 days after they have completed the services agreed upon. For work worth $800 or more, the Act also requires a written contract that spells out what services have been agreed upon as well as the agreed upon rate and date of payment. The Department of Consumer Affairs will provide model contracts in English and six other languages commonly spoken in the city for freelancers to use or model their own contracts. In addition, the client can no longer tell a freelancer, “We can pay you faster, but you’ll have to accept less.”

The Freelancers Union campaigned for over a year to get the bill passed. They shared stories of non-payment—and what that non-payment meant to their lives—before the City Council. They rallied on the steps of City Hall. They also collected over 8,500 signatures on a petition supporting the bill.

Before becoming law, the bill needs to be signed by Mayor Bill de Blasio within the next 30 days. But Councilmember Brad Lander is confident that he will do so.

Given that nearly 55 million people across the country are now freelancing, the Freelance Isn’t Free Act could very well be a model for the rest of the nation’s freelance workforce to make sure they get paid—and get paid on time.