Listening for FootstepsOffering Brief Safety in a Hostile Place 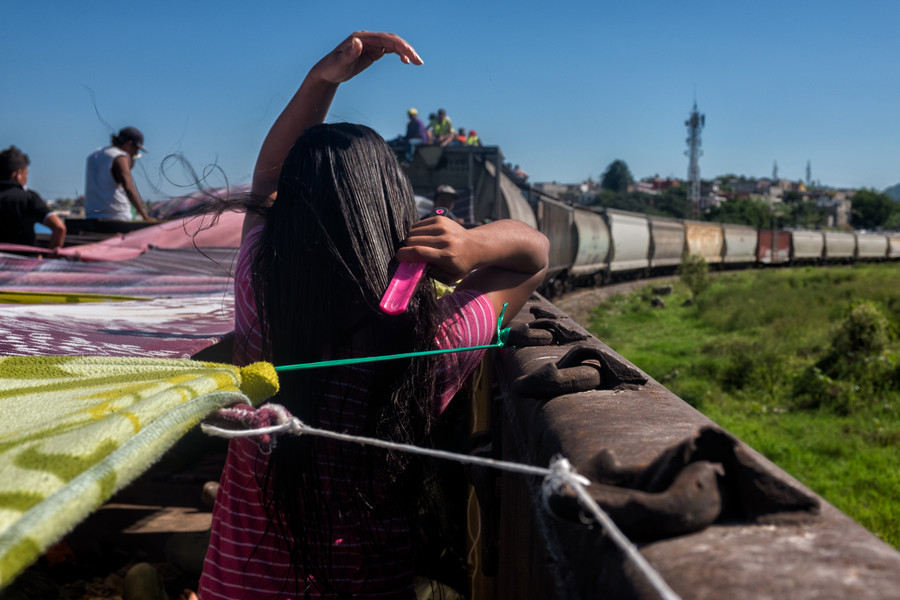 Less than 24 hours after my dad’s citizenship ceremony, I boarded a flight to begin my dissertation fieldwork in Tucson, Arizona. At his swearing-in, I witnessed my father pledge his allegiance to the American flag after living in the United States for 20 years, the majority of that time spent undocumented and in a state of constant deportability. Later that evening, he confessed to feeling guilty for betraying our home country of Argentina, for disavowing his loyalty to our patria. With the sobering image of my father’s eyes still in my mind, I packed up my hiking gear and prepared to spend a month volunteering with humanitarian organizations at the U.S.-Mexico border.

My thoughts were spinning as I fixated on the uncanny timing of all of these events: me, traveling to the borderlands to engage in humanitarian work when days earlier I’d had a conversation with my immigration lawyer about my own vulnerability in the border region; me, sitting comfortably on a plane 30,000 feet in the air as Scott Warren was on trial on the ground below for offering migrants water; me, conducting research for a dissertation on contemporary sanctuary practices, when countless times in my past it was I who had been a recipient of sanctuary—from friends, family, and fellow migrants.

In the United States, sanctuary is most commonly associated with the Tucson-based movement to transport and harbor Central American refugees fleeing violence in their homelands during the Reagan Administration. Religious activists denounced Reagan’s Cold War strategy that refused to recognize Central Americans as political refugees, instead deeming them economic migrants and therefore denying them the right to apply for asylum. The focus of my traveling to Tucson was to study how sanctuary has expanded and evolved in response to border militarization and escalating state-sponsored violence. Here, at the birthplace of the U.S. Sanctuary Movement, I witnessed how activists have embraced a mobile form of sanctuary, insisting that the historical definition of sanctuary as places of refuge is inadequate for our current political moment.

On my first day in Tucson, I joined the Samaritans on their water drops near the Buenos Aires National Wildlife Refuge, an organization established to protect and restore habitat for a range of southwestern wildlife—a sanctuary of sorts for desert fauna. Since the early 2000s, members of organizations such as the Samaritans, No More Deaths, and Humane Borders have hiked along these rugged arroyos and outcrops to provide migrants with emergency medical assistance, food, and water. These groups formed in response to “prevention through deterrence”—a border militarization strategy implemented in 1994 that violently redirected migration into the most remote regions of the desert. Facing a journey through lands with few water sources and temperatures that exceed 110 degrees, migrants are vulnerable to dehydration, heat exhaustion, poisonous bites, severely blistered feet, and other life-threatening injuries.

In 2019 alone, 79 migrants have been found dead in the Tucson sector of the border region. Volunteers who participate in aid hikes hope to bring an end to deaths in the desert, offering a vision for a different kind of society—one that is rooted in the principles of mutual aid, care, and reciprocity. Carrying backpacks filled with socks, blankets, and first aid kits, we hiked for several miles down long, meandering paths of loose rocks, leaving behind water and nonperishable food items as we went. The objects we found on these trails speak to the border-crossing experience—a deteriorating backpack containing dissolvable electrolytes and powdered milk, camouflage sweatpants and black plastic water bottles, a bottle of cologne and a comb. I tucked the last item into my pocket as a reminder that care is not only provided by North American activists; migrants heal and protect themselves during the treacherous journey.

I imagined a mother combing her son’s long tresses of black hair as they rested next to clumps of mesquite trees and saguaro cacti, her care preparing him for the journey ahead the best way she knew how. When the time came for us to leave behind the water we carried, our group used markers to write messages of encouragement and support. I placed my jugs, which read, “Hasta un mundo sin fronteras” and “Migrar es un derecho humano,” underneath a tree next to three jugs left over from a November 2018 water drop. Another volunteer left a rosary, creating a makeshift altar in honor of migrants’ precarious itineraries and their insistence on survival.

Sanctuary is not simply a set-apart or sacred place, but rather the activity of fostering relationships built on care, mutuality, and reciprocity.

I repeated this act many times over the course of my four weeks in Arizona, offering sanctuary to migrants through water and food. I received sanctuary from other activists myself in difficult moments, like the time I suffered from a serious wasp bite or when I experienced crippling anxiety anytime we approached a Border Patrol checkpoint. I learned how to verbalize sanctuary as practice and presence, as witnessing the cruelty of prevention through deterrence and of offering assistance to people in need. Hiking through the unforgiving hard sand and announcing, “Somos amigos,” I began to understand sanctuary as a sacred practice, as an ethic of care rooted in what Macarena Gómez-Barris calls a “decolonial femme methodology.” These actions affirm and center feminized labor—listening for footsteps in the distance, healing and bandaging wounds and blisters, caring about and for fellow human beings, feeding and nurturing fugitive bodies, disregarding arbitrary lines in the sand, and taking on the task of helping others survive in a hostile environment.

The Samaritans describe their work as a “voice of compassion” and a “healing presence in the Arizona desert,” creating mobile sanctuaries in one of the least safe spaces for migrants—the militarized, hyper-surveilled, and overpoliced Sonoran Desert. During my time in Tucson, I worked with an artist who creates and installs crosses at the sites where migrants’ remains have been found. I met a man named Panchito who found his calling as a nurse after being deported from the United States and now operates an ambulance that treats people living in Mexican migrant shelters. His is a sanctuary on wheels, offering refuge and care to people without nationality, who therefore don’t qualify for medical care anywhere else. I volunteered at a Benedictine monastery–turned–migrant shelter, a sacred space repurposed into a sanctuary for people without a home. I shared a cup of coffee with Scott Warren and we discussed the act of leaving food and water in the desert as an embodied and portable form of sanctuary—a uniquely feminist response to border militarization.

Through the aid work of Humane Borders, the Samaritans, and No More Deaths, I have been reminded that sanctuary is not simply a set-apart or sacred place, but rather the activity of fostering relationships built on care, mutuality, and reciprocity. Despite sensationalist reportage, the borderlands are not marked only by extraordinary violence, carceral governance, walls and fences. The desert is teeming with other possibilities. To return to Gómez-Barris, there are “submerged perspectives” that exist beyond, below, and through militarized borders and man-made barriers. A different world is possible and, in fact, is already being lived every day.