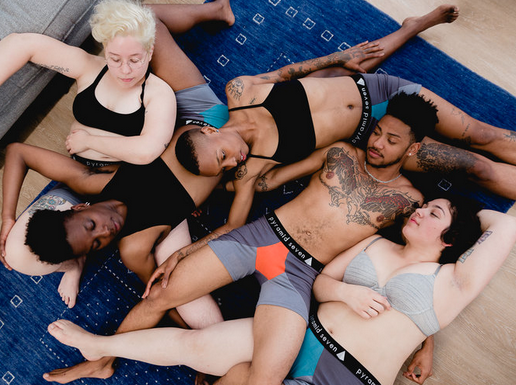 In an Instagram video shared on Pyramid Seven’s Facebook page, Chicago rapper/singer/songwriter CJ Seymour expresses their excitement about the brand’s new line of organic-cotton boxer briefs made specifically for gender nonconforming and trans-identified folks. “All my life I’ve bought boxers for cis men right? And I don’t use tampons, I use pads, and it’s always been hard to line them up.”

In introducing Pyramid Seven—a Chicago-based, queer-owned company started by Zipporah Jarmon and Michelle Janayea in order to provide “underwear for periods, not gender,” Seymour brings up a subject that too few purveyors of menstrual products consider: the varying genders and identities of folks who menstruate. The way in which we talk about periods and menstruation is deeply rooted in a history where gender is understood as fixed and unyielding. Companies like Pyramid Seven are conscious of the exclusivity of menstrual products, and are helping create a more gender affirming market for those products. Bitch got the lowdown from Jarmon on Pyramid Seven’s game-changing project.

Vanessa Borjon: How did Pyramid Seven come about?

Zipporah Jarmon: In April 2016, I was feeling pretty down on myself because I’d bled on a new pair of pants a few days before. I [felt] frustrated and embarrassed, and started thinking about how I had to wear feminine underwear while on my period because there really weren’t any other options that fit my aesthetic or gender presentation. I’m a graphic designer, so I decided to sketch out what a pair of boxers would look like if they could be worn while menstruating. Two months later, I was introduced to Michelle, who [has] a background in fashion design and artivism (art activism), and Pyramid Seven went from paper to fabric!

What’s been the response to the project and its slogan, “underwear for periods, not gender?”

The response has been great! We sold out within three weeks and [the] company has been recognized in various media outlets. We’re so grateful for and humbled by customers who tell us that the boxer briefs have made a difference in their lives.

And we are proud to be part of a movement that [is shifting] toward gender inclusiveness in menstrual products and amplifying the needs of folks who have been largely ignored by the mainstream market. There are always going to be those voices of negativity—people who don’t understand and don’t want to—but that’s not where we focus our energy. We take advantage of teachable moments, and hope that we’re broadening the conversation around menstruation and around gender.

Where else in media or on the market do you see products made specifically for gender nonconforming and trans folks?

We have seen a growing number of queer-owned clothing lines and companies that cater specifically to folks that fall outside of the gender binary. Hopefully this leads to a larger shift where trans and gender nonconforming folks aren’t this “niche market,” and where products are made to serve a purpose, rather than serving stereotypes about gender.

What’s next for Pyramid Seven?

We have so many things we’d like to do in the future, but at this moment we want to expand our size range to reflect the true diversity of our customers. Even though our XS to XL size range is broad for the underwear market, we recognize that to be truly inclusive means to not only be inclusive of all genders, but of all bodies. We are also growing our team and are looking forward to bringing some very talented folks to Pyramid Seven!