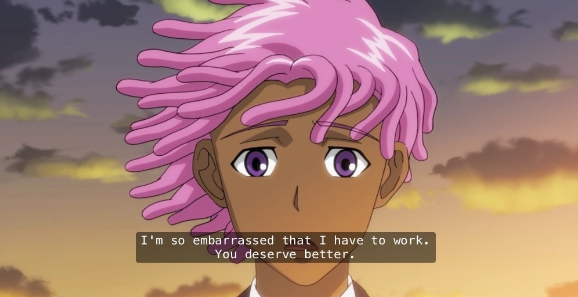 When I heard about 2017’s Netflix series Neo Yokio, I  got excited: A campy, cute anime-inspired cartoon about  a magic-wielding, demon-slaying Black teen experiencing life as we ride along with them? I was in, especially given the talented group of actors and musicians involved, among them Dev Hynes, Amandla Stenberg, and Willow Smith. Creator Ezra Koenig (yep, the guy from Vampire Weekend) wrote this show with diverse characters, which initially gave me some hope, as did his tweets taking a stance directly against “alt-right anime nazis” and in support of anime communists.

Neo Yokio, the show’s eponymous setting, is meant to be a “futurist” New York-Tokyo hybrid, but despite the inclusion of both magic and robots,  it reflects little of Tokyo and even less of futurism. The city and the show itself are more of an homage to some of Koenig’s favorite 1980s and ’90s animes, and is produced by Production IG and Studio Deen, two very accomplished Japanese animation studios. All this, along with the positive critical reception—Dazed called the show “distinctly modern” in its takes on, “politics, class struggle, race, gender, communism vs. capitalism, and other themes that are very much our time”— got me pumped for the premiere. So it was a big letdown to realize that almost all of Neo Yokio centers main character Kaz Kaan (Jaden Smith), a bourgeois asshole who seems to care only about himself and maintaining his elite status as the most eligible bachelor in the city of Neo Yokio.

Kaz Kaan is a rare magistocrat, elegant young bachelor, and exorcist. He wallows in excess, only taking issue with capitalism when he’s derogatorily called “Neo Riche.” Though the show is ostensibly a satire, it’s not always clear when or how: Kaz has internalized the class-based society around him, but the show rarely ventures beyond it. The fact that Neo Yokio left me questioning whether it’s meant to parody elite cluelessness or replicate it makes me feel that it’s mostly the latter.

Part of this has to do with the foils that the show provides for Kaz. His relationship with ex-fashion blogger Helena St. Tessero (Tavi Gevinson), for instance, provides a chance for Kaz to cease his vapid absorption with labels and social signifiers and reevaluate everything he knows about Neo Yokio’s “sinister high society.” Helena is one of the few characters who does critique the economic inequality and materialistic obsessions of Neo Yokio’s elite class. But I got the sense that the audience isn’t supposed to take Helena seriously: She’s written as a manic pixie dream girl, whose extreme critiques of the capitalist system and claims about the inevitability of its demise come after Kaz exorcises a demon from her. Helena’s “possessed” status lingers around her revolutionary messages, giving the people around her an excuse for ignoring her warnings. 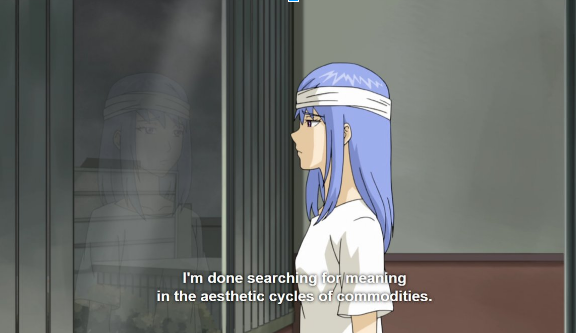 Then there’s Mila Malevitch (Annet Mahendru), a Soviet Formula 1 driver whose car is festooned with Communist iconography. Like Helena, she’s meant to counter for Kaz’s bourgeois strivings; also like Helena, her portrayal leans on caricatures of anticapitalism: Mila is portrayed as a closet capitalist who just loves the pastries sold by Ralph Lauren and is seemingly one eclair away from giving up Communism.

And Kaz’s treatment of his mecha-butler, Charles (Jude Law), offers a perfect example of a worker alienated from its labor. Kaz forces Charles to endure inhumane working conditions and doesn’t provide proper nourishment for the mecha; he can do this because he has enough money, resources, and ability to exploit the labor of others while valuing his own work as a demon hunter as more important.

With Kaz Kaan spending most of his screen time fussing about his outfits and meeting other materialistic desires, there’s little insight into his lack of self-awareness, let alone a glimpse into the life of Neo Yokio’s nonelite residents. Kaz himself is classist, misogynist, and transphobic, and though several reviews of the show call out NY’s underdeveloped plot and monotonous voice acting, few seem to make the connection between those formal shortcomings and Kaz’s unexamined biases. The show brims with references to iconic fashion brands like Louis Vuitton, Gucci, and Chanel, and Kaz goes to extreme lengths to cement himself as an “elegant man of taste.” (“Taste” translates as access to money and a willingness to spend it carelessly by, say, shopping blindfolded at Bergdorf Goodman.) Almost every minute of the show references this kind of absurd elitism, so I watched the first season expecting some kind of payoff for the tensions created by Kaz’s relationship to materialism and capitalism and his growing awareness that life beyond Neo Yokio looks very different. I’m still waiting. If a show doesn’t provide the framework to critically address the thing that it purports to satirize (in this case, capitalism), can it actually be satire?

In the season finale, titled “I’m Starting to Think Neo Yokio’s Not the Greatest City in the World,” Kaz finally sees the dark side of Neo Yokio when he races his car through “The Walled City,” a forgotten place his mecha-butler describes as filled with “slum denizens.” Kaz speeds through tight, narrow streets filled with poor people who set upon his vehicle, yelling “Bougie pig, don’t you know we’re dying down here?” Kaz offers a hurried apology, but there’s no point at which he recognizes that everything Helena tried to tell him was right, and no reflection on his own ignorance. Even his season-ending inner monologue (“Everything has fallen back into place, and yet, I can’t help but feel that Neo Yokio is about to explode”) does little to convince me that next season will bring substantial changes in character development. Even with the anticapitalist, feminist, and queer critiques of the show, is it possible for the series to evolve without its creators changing the lens?

My theory about the show is that the demons Kaz must battle are actually capitalist forces of destruction bent on wreaking havoc. If a next season of Neo Yokio does affirm that the demons plaguing the city are a capitalist force of destruction, it would be a good first step, but it would also necessitate addressing the show’s postracial approach—in other words, the fact that it fails to acknowledge race at all. If the demons are a capitalist force, they are also forces that use whiteness as a key tool of the bourgeoisie. (It already says a lot that Season 1’s scariest demon is Sailor Pellegrino, a character that Koenig has noted is meant to be an amalgamation of Taylor Swift, Katy Perry, and Miley Cyrus—three women famous for appropriating Black culture for profit.)

My main beef with Neo Yokio is that it is anti-revolutionary to root for capitalism, and so much of the show seems to be doing just that, albeit under the guise of parody. When even the most minimal efforts of self-care and life preservation for poor people are greeted with people arguing that the poor should “work hard” and not spend their money on “unnecessary purchases,” it just doesn’t feel like the time for shows like this to hedge its bets. There may be no ethical consumption under capitalism, but we have to survive it in order to work towards concrete social change. That includes being critical about the real meaning that shows like this one puts forth.