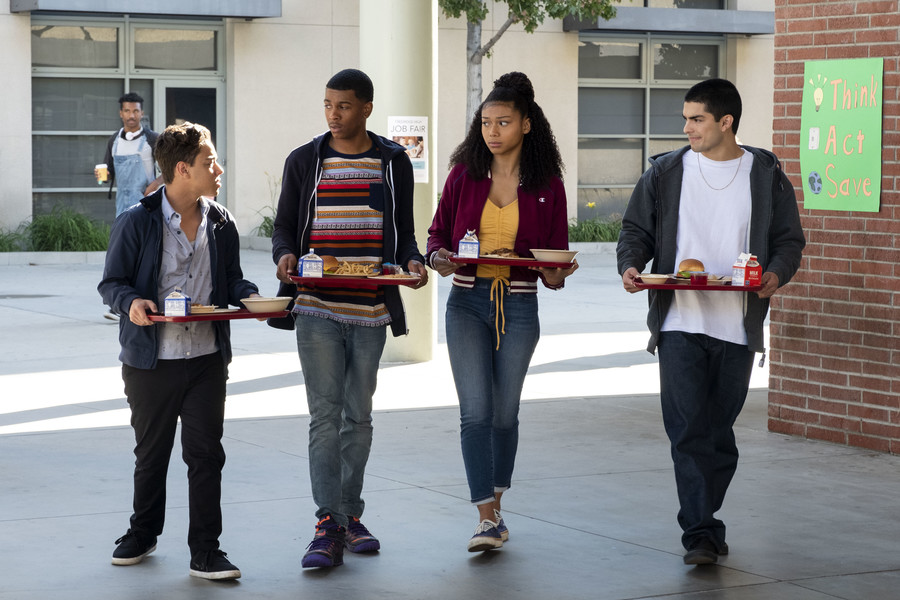 Jason Genao as Ruby, left, Brett Gray as Jamal, Sierra Capri as Monse, and Diego Tinoco as Cesar on On My Block (Nicola Goode/Netflix)

Writers of color have long employed magical realism when tackling difficult issues like systemic oppression and generational trauma. Not to be confused with Fantasy™, wherein creators construct entirely new worlds with distinct rules, magical realism unfolds in settings like our own where mundanity is disrupted by forces just outside the realm of possibility. Such is the world of Freeridge, California, the fictionalized version of South Central Los Angeles where Netflix’s On My Block is set.

The show, whose second season dropped in March, follows Monse (Sierra Capri), Jamal (Brett Gray), Cesar (Diego Tinoco), and Ruby (Jason Genao), a group of Black and Latinx friends navigating their first year of high school amid ever-present gang violence. The show is set up as a Goonies for youth of color, following the protagonists as they dig for the truth of an urban legend involving money stolen that was never recovered. However, Monse immediately establishes the limits of the hood heroes’ fantasy when she says, in the first season, that “only white kids find treasure.” It’s a statement that is seemingly at odds with the treasure-hunt narrative of the series, but Monse is simply relaying a universal truth for most youth of color: systems, even extraordinary ones, seldom function in favor of marginalized people.

Monse’s observation has precedent in the show’s own universe: the folks who originally stole and buried the money from the now-defunct Roller World theme park were all cursed—and consequently met untimely deaths. So though Jamal finds the buried treasure at the end of OMB’s first season, the kids are too terrified to actually use it.  Their solution—laundering the stolen money by committing wire fraud, thereby cutting its provenance—conveys quite literally the way that “innocence” is never afforded to disenfranchised youth of color with dreams of escaping their neighborhood.

Figuratively, however, our heroes’ crime functions within the story’s magical-realist space by echoing the Limpia—the Indigenous practice of cleansing objects, spaces, and people of negativity. Only after lifting the tainted money’s curse can our protagonists repurpose it for good—namely, getting Cesar out of the gang whose members, decades earlier, first stole the loot. None of the kids have delusions of grandeur; all they want is to buy their way out of historical cycles of violence.

Freeridge’s two antagonizing forces are dueling gangs called the Santos (Spanish for saints) and the Prophets, creating a subtext where our protagonists are trapped by Catholic imagery and must rely on magic for salvation. Joining the Santos is an inescapable part of Cesar’s cultural identity—even though he knows it may cause irreparable damage to his future. OMB’s first episode establishes this conflict when Cesar tells Monse that he’s doomed to stay in Freeridge while she and the rest of their group go on to have successful lives elsewhere: “This life, it’s my destiny. My family crest is and always will be a gang sign.”

The threat of dying young looms over On My Block’s characters, something that reflects an omnipresent reality for Black and Latinx youth in neighborhoods impacted by systemic racism. When the protagonists realize that their friend Olivia’s (Ronni Hawk) 15 birthday is on the horizon, they decide to organize a quinceañera on her behalf. Olivia is hesitant to participate because her parents were deported and can’t be present for the ceremony. Nevertheless, she is pressured by Ruby to have a quinceañera—and it is there that she is gunned down. While Cesar has been protected from unshakeable cultural norms by his friends’ magical money, Olivia can’t escape her community’s violence.

But the show also presents these friends with a magical coping mechanism: animated garden gnomes. OMB’s first season introduces Chivo (Emilio Rivera), a veteran of the Santos who has lost all his peers to gang violence and now communicates with sentient yard figurines who represent his fallen comrades. It’s another example of the series drawing parallels between religious idols and gang membership, as the gnomes also serve other purposes: two of them, Julio and Juanita, serve as Jamal’s guides in his search for the series’ macguffin.

On My Block’s magical realism doesn’t always work, and in some cases undermines the show’s strengths. Jamal is among On My Block’s most important characters: His tireless faith in the fantastical allows the other protagonists to dream of a violence-free future. But his storylines are often ones where there’s an undeniable overlap of anti-Black racism and magical realism. Jamal, who found the Roller World money, is also tasked with protecting it—which also involves trying to protect his friends from its storied curse. Hiding the money at Ruby’s home, for instance, leads to what they believe is its curse befalling Ruby’s abuelita. When the local curandera suggests that there’s something that “does not belong” in the house, the kids are convinced it’s the money. And when Amber (Shoshana Bush), the pregnant white girlfriend of Ruby’s older brother, Mario (Danny Ramirez), goes into labor, the group begins burning the money, afraid that it’s curse will harm the newborn baby.

But the thing that doesn’t belong, as Ruby’s abuelita later reveals, is Amber’s baby. Though it’s not explicitly stated, Jamal’s joke—that a chocolate welcome cake, rather than a blue one, might be more appropriate—conveys that the baby is Black and thus not Mario’s. In other words, a Black baby is the real source of misfortune for the characters. It’s a moment where OMB could have interrogated anti-Blackness among non-Black Latinxs; it could even have addressed the complexity of mestizaje (racial mixture in Latin America). Instead, it’s just another humorous roadblock in our protagonists’ journey, with neither the introduction of a white character nor the designation of a Black baby as a curse serving a narrative purpose. In addition to its inherent racism, this plot point also impedes our expectations of the magic in this world, which has previously worked to help our protagonists breach systemic or cultural barriers.

The threat of dying young looms over On My Block’s characters, something that reflects an omnipresent reality for Black and Latinx youth in neighborhoods impacted by systemic racism.

Yet, all of Jamal’s friends taking him for granted is one of the show’s running gags. They forget him during their first high school dance and leave him to find the treasure on his own. The series stops short of exploring the effects of one-sided friendships and instead presents the continuous neglect of Jamal as a punch line. Jamal’s unending acts of service and underdeveloped characterization puts him in the lineage of the “magical Black person,” a trope popularized by Spike Lee in 2001 to highlight the prevalence of working-class and/or disabled Black characters who exist solely to aide white protagonists. Though all of On My Block’s protagonists are working class and none of them are presented as disabled, Jamal’s subplot for the first half of Season 1 revolves around him faking injuries to avoid playing on the high-school football team.

This subtextual anti-Black racism bleeds into the mundane aspects of On My Block as well. White cops are painted as clumsy but well-meaning aids to the protagonists, while the audience is expected to root against the all-Black gang, the Prophets. And while that might work in shows centering on suburban white kids, it does not reflect the real-life tensions between police officers and youth of color in underserved neighborhoods. Of course, it’s not the job of On My Block to educate viewers about the realities of police brutality and its role in the formation and racial segregation of Los Angeles gangs. But the show’s hesitance to fully indict whiteness comes at the expense of its Black characters, presenting the incarceration of Black men as this hood fantasy’s most positive resolution.

On the other hand, it’s to the writers’ credit that OMB acknowledges that some problems cannot be solved by magical means, with careful treatment of PTSD and other manifestations of trauma.  For instance, when Ruby discovers the fate of the Prophets, he states: “I thought about this day for so long, praying for revenge. But this? This doesn’t make me feel anything. It’s not gonna bring her [Olivia] back. What’s the point of it all? Latrelle took a life, now his life’s over.” Accordingly, Ruby’s monologue can read as an acknowledgement that incarceration is also an unfit resolution for healing and community safety—an observation supported by the shocking twist in the second season finale.

On My Block would benefit from revisiting the radical roots of magical realism to take violent systems to task. Though the importance of the show’s representation is undeniable, it is crucial that its creators are careful about the show’s optics in Season 3. After all, no amount of magic can recover an audience’s’ goodwill once it is lost.

Read this Next: Bumped Off 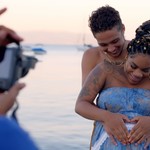 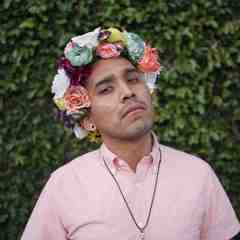 Rubén Angel is a writer, producer, and performer from South East LA.