The Problems With Bemoaning a Rapist's "Once-Promising Future" | Bitch Media

The Problems With Bemoaning a Rapist's “Once-Promising Future” 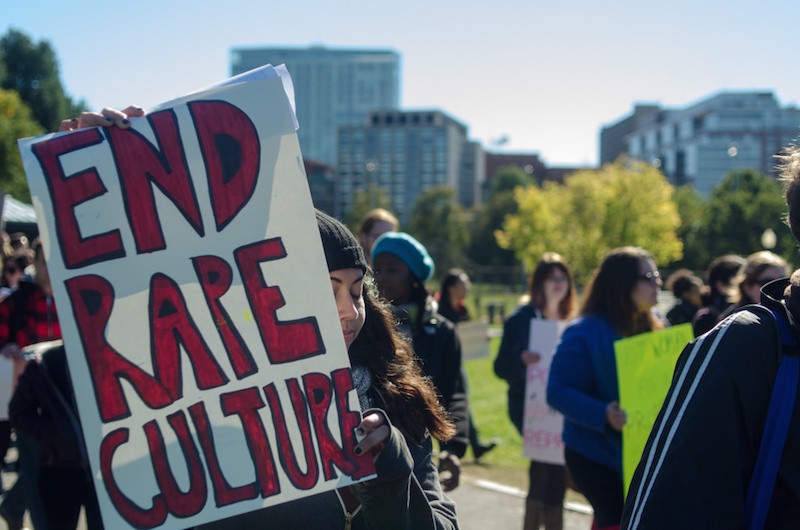 A protest in 2012 says it all. Photo by Chase Carter (Creative Commons).

Update August 29, 2016: Brock Turner is slated to be released from prison this week after serving only three months of his sentence. According to records, he’s being released three months early for good behavior.

In January 2015, Stanford swimmer and freshman Brock Allen Turner was arrested for raping an unconscious woman.

Turner was caught outside of a fraternity house mid-rape by two Stanford University graduate students biking across campus. One of the bicyclists yelled, “What are you doing?” to Turner, at which point he ran. The students were able to catch up to Turner and wrestle him to the ground.

Because Turner was a star swimmer at Stanford, coverage of his trial received the “once-promising future” treatment. In reporting on sexual assault, media outlets show a pattern of focusing on how the assailant has a bright future and how the current case could ruin his upward trajectory–most articles about Turner include a nice portrait of him instead of his mugshot. We saw this in reporting on Daniel Holtzclaw, the former Oklahoma City police officer convicted of multiple counts of rape, whose aspiring football career become the focus of a 12,000-word SB Nation feature. We saw this in Steubenville: People lamented how the rape case there would “blow up” the football program. During Turner’s trial, his lawyers painted a picture of him as a champion swimmer, and his family argued that the loss of a Stanford swimming scholarship was already major retribution for his crime and should factor into his sentencing. The framing seems to have worked. Turner’s “once-promising future” was once again invoked when sentencing judge Aaron Persky sentenced him to just six months in county jail after Turner was convicted of three felonies, including assault with attempt to rape.

During the trial, Turner said that he was establishing a program so that he could “speak out against the college campus drinking culture and the sexual promiscuity that goes along with that.” He also said that he wants to show people that one night of drinking can ruin a life—meaning his own. Turner was facing a maximum sentence of 14 years, but the sentencing judge said that because Turner was young and had no previous criminal history, “a prison sentence would have a severe impact on him.”

On Thursday, Turner’s victim addressed him directly and read him a letter about the “severe impact” his assault had on her. Afterwards, she provided her full statement to BuzzFeed news, saying that she was disappointed by the sentence and angry that Turner still denies sexually assaulting her.

“I want the judge to know that he ignited a tiny fire,” she said. She certainly ignited a big response: People who read the statement launched a petition demanding the recall of sentencing judge Aaron Persky that has received almost 60,000 signatures so far.

The statement is a devastating and powerful punch-to-the-stomach that lit up the internet over the weekend and has now received more than 4 million views. The woman, now 23, said that the “gentle” sentence “is a reason for all of us to speak even louder.” In her statement, the survivor of the assault lays out many of the problems with the way media outlets often report on sexual assault. Reading a news article about the assault, the victim was surprised to find Turner’s swimming career discussed in a glowing light:

“At the bottom of the article, after I learned about the graphic details of my own sexual assault, the article listed his swimming times. She was found breathing, unresponsive with her underwear six inches away from her bare stomach curled in fetal position. By the way, he’s really good at swimming. Throw in my mile time if that’s what we’re doing. I’m good at cooking, put that in there, I think the end is where you list your extracurriculars to cancel out all the sickening things that’ve happened.”

The statement ends with the survivor standing with victims of sexual assault, saying, “And finally, to girls everywhere, I am with you. On nights when you feel alone, I am with you.”