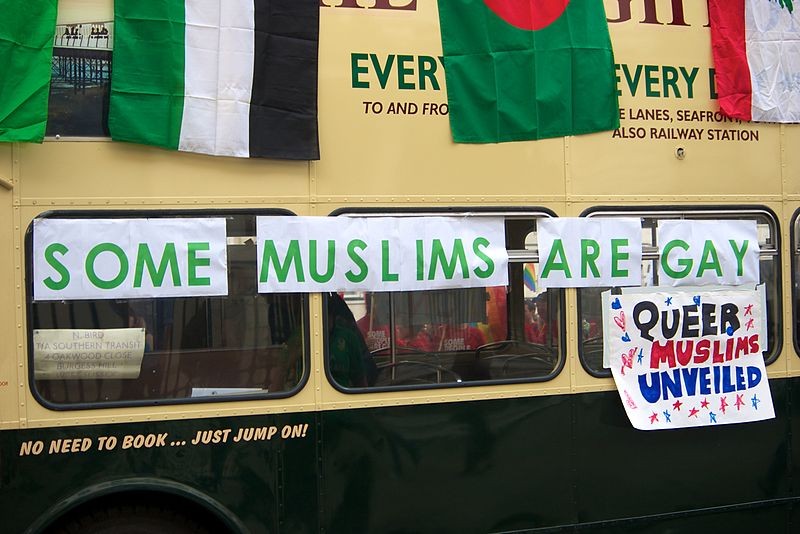 After a gunman opened fire at an Orlando gay club last June, presidential candidate Donald Trump issued a statement that condemned the murder of trans and queer folks. It noted that “49 wonderful Americans were savagely murdered by an Islamic terrorist. This time the terrorist targeted the LGBTQ community. No good, and we’re gonna stop it. As your president, I will do everything in my power to protect LGBTQ citizens from the violence and oppression of a foreign hateful ideology.”

His plan to “protect” these LGBTQ citizens, as we soon found out, involved barring Muslims from entering his soon-to-be “great” nation. Of course, Trump’s misogyny and homophobia are common knowledge, but when it works for his xenophobic regime, he’s quick to promise protections to queer folks at the expense of Muslims. One of his major strategies in the creation of this imagined “great America” has been homonationalism, a term coined by writer and professor Jasbir Puar to demonstrate how Western imperial and racist projects co-opt gay rights.

A week into his presidency, Trump sowed global terror by banning refugees and Muslim immigrants from seven countries, and he continues to rouse fear with scattershot references to and rumors of more executive orders that pander to bigotry. In the wake of the ban, it is probable that the “extreme vetting” promised by the president will include a “values test” for potential immigrants—Muslim immigrants will be asked, among other things, about their “views on homosexuality.”

Since homonationalism pits the LGBTQ community against people of color and Muslims, it produces a whitewashed image of the queer community that sees queer and Muslim as mutually exclusive identities. In the homonationalist imagination, all LGBTQ people are white, cis, gay, and male. And since this privileged demographic of queer folks is the only one visible to homonationalism, racist leaders assume they can garner the support of this population. But what if the immigrant being vetted by Trump’s “values test” is a brown trans Muslim whose discomfort at having one of their identities function as a weapon against the other gets misunderstood as homophobia? In a world where the only way to be queer relies on white, cis, and American standards, how do Black and brown LGBTQ folks express themselves?

As we resist Trump’s potential anti-LGBTQ orders, it’s important to remember that even though Trump is himself transphobic and homophobic, he can get on the side of LGBTQ rights when it’s convenient. His daughter Ivanka Trump and her husband, Jared Kushner, supposedly intervened to uphold the 2014 Obama executive order that prohibits LGBTQ discrimination against people working as federal contractors, but that’s certainly not a success story—the Muslim and refugee ban is already transphobic and homophobic, since it violently oppresses trans and queer Muslims and refugees. It’s also important to remember that Trump’s co-optation of LGBTQ rights in the service of Islamophobia is nothing new—it has a long history in the United States, Europe, and Israel.

In Europe, the strategy of moving left on LGBTQ issues but remaining fiercely right-wing on immigration and racial issues has been successful for xenophobic and Islamophobic parties and organizations. Pim Fortuyn, an openly gay, right-leaning leader in the Netherlands, advocated to ban Muslim immigration because, according to him, Muslim immigrants posed a threat to the gay community. Marine Le Pen of the French National Front appealed to the gay vote by welcoming certain racist gay men into her party; after fanning the flames of Islamophobia in conservative gay groups, she has managed to win the support of French gay activists like Sébastian Chenu and other members of France’s queer community. Similarly, Israel has strategically washed itself clean of apartheid by promoting the country as a gay haven, even though it continues to colonize trans and queer Palestinians. Deploying the language of the rights of gender and sexual minorities has become a fashionable way to compel the left to ignore racialized violence committed by imperial states.

Meanwhile, the narrative of American exceptionalism holds that American sexual minorities are more empowered and liberated than those in the Global South. This doesn’t take into account that the anti-gay laws of many countries in the Global South are rooted in colonial histories and doesn’t understand how trans and queer people of color in the United States can never find liberation while police violence, surveillance, drone warfare, incarceration, and deportation continue to thrive. This idea of America’s sexual exceptionalism allows a violent surveillance state to wear a proud rainbow mask while committing atrocities against people of color.

As progressive queer folks lament the co-optation of their fights by Trump, it’s worth wondering why conservative venues have found it so easy to take up LGBTQ rights to serve Islamophobia and racism. If mainstream LGBTQ organizations like the Human Rights Campaign and visible queer spaces like pride parades always foregrounded Islamophobia, racism, and xenophobia as inherently trans and queer issues, would LGBTQ rights function as an effective right-wing tool? If the larger LGBTQ movement always prioritized arguments for prison and police abolition, would the state so easily take up gender and sexuality inclusion as a sign of its progress? If the global queer narrative always incorporated the lived realities of Palestinian queers, would Israel be able to pinkwash its settler colonial violence?

Gender and sexuality work so magnificently to serve racism and imperialism because privileged queer folks have been complicit in racism and imperialism. The anti-intersectional politics of the mainstream LGBTQ movement in the United States have only made the movement vulnerable to co-optation. And even though historic movements like the Stonewall riots were led by trans women of color who were resisting police violence, the whitewashing of LGBTQ history by films like Stonewall has only made it easy for the state to see privileged white queers as its sympathizers. It is no surprise, then, that a movement that has dwindled into celebrations of antifeminist and racist institutions like marriage (rather than sustaining a resistance against the interconnected structures of heteropatriarchy, racism, Islamophobia, capitalism, and xenophobia) can get so easily co-opted by racists like Trump.

So let the fascism of the Trump era be a lesson for all those who work for the liberation of queer and trans folks: To resist the deployment of LGBTQ issues by a racist and Islamophobic state, we must transform the dominant trans/queer narrative into one that refuses co-optation. To fight Trump’s homonationalism, we must create a movement that centers trans people of color from around the world. We must refocus large queer demands away from bourgeois issues like marriage equality and toward fighting structural racism, eradicating homelessness, providing free healthcare, and resisting global militarism. Emphasize the lives of the most vulnerable within the trans and queer population—like Muslim refugees, like sex workers, like homeless folks—and then perhaps we will be able to create a movement that liberates all gender and sexual minorities, not just the cis, the rich, and the white. 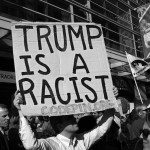 by s.e. smith
By labeling Trump’s behaviors as “mental illness,” people aren’t just engaging in casual hyperbole, they're repeating terms they hear used as epithets. And that hurts, for people who deal with mental illness.