Open-Minded: Rachel Krantz on Nonmonogamy as a Labor of Love | Bitch Media

Open-MindedRachel Krantz on Nonmonogamy as a Labor of Love 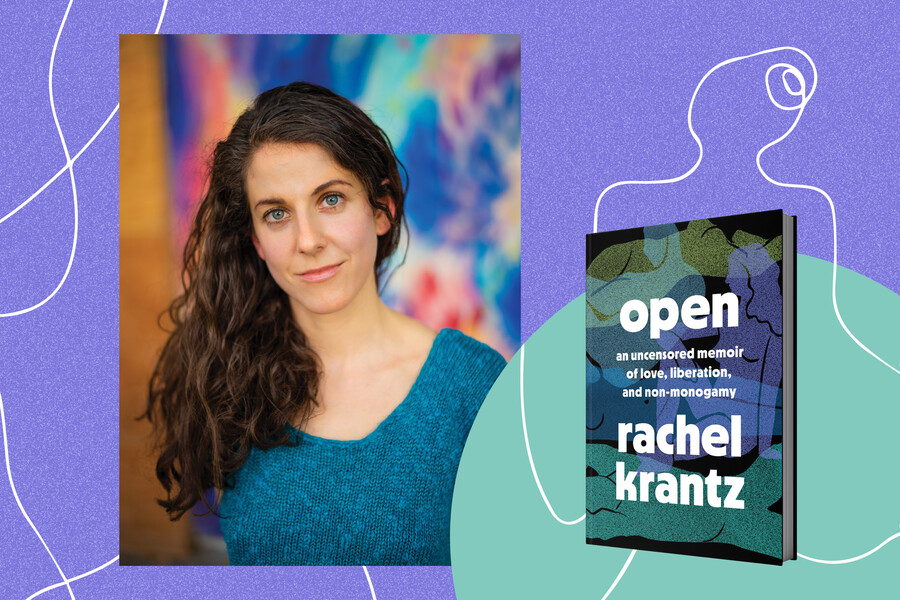 This article was published in Touch Issue #93 | Spring 2022 Subscribe »
In 2010, Sex at Dawn: The Prehistoric Origins of Modern Sexuality hit the New York Times bestseller list and, like Alfred Kinsey’s eponymous report and Masters and Johnson’s Human Sexual Response before it, challenged the entrenched, deeply gendered conventional wisdom of sexual desire. Its most provocative assertion—that monogamy became a romantic societal standard not because it was innate but because it imposed order and ownership—jump-started conversations about nonmonogamy and polyamory. In the decade since, alternative relationship structures have become increasingly visible, with celebrity proponents, internet how-tos, and cheerful portmanteaus like “throuple” entering the lexicon.
Journalist Rachel Krantz, a founding editor of Bustle, was 27 when she met Adam, a professor who encouraged her curiosity about nonmonogamy and dominant/submissive dynamics. What happened next is detailed in Open: An Uncensored Memoir of Love, Liberation, and Non-Monogamy (2022, Harmony). Krantz is both generous and fearless in describing her adventures at sex parties and swingers’ retreats, but she’s also honest about itemizing the things she lost—chief among them her confidence in herself—as Adam became controlling and emotionally manipulative. The book’s structure reflects the relationship’s consuming and frequently chaotic trajectory: Immersive experiences with lovers alternate with research-based insight from social scientists; stoned analysis of The Little Mermaid coexist with furtive, self-abnegating journal entries.
Krantz is neither an evangelist nor a skeptic about nonmonogamy, and Open is an insightful and compassionate reminder that nonmonogamy—like any other intimate relationship—is only as viable as the humans involved make it. Bitch recently got in touch to hear more.
Open is a very personal book, so the fact that you involved experts both from a reporting standpoint and as part of your own journey was interesting.
Talking to these experts was validating. I was able to hear [that] I was not a freak for my desires and talk with psychologists and sex researchers to contextualize what was happening.
I [thought] that this book was going to be a light at the end of the tunnel of this dysfunctional relationship. You see me losing trust in my own sense of reality [and] judgment. Working on a book, recording conversations and events and even arguments—all with Adam’s consent and with other people’s, to their credit—gave me a solid reality to look back on. I really didn’t trust [my memories]. I [kept] a journal, but I felt like I was losing my mind. Having [an] audio record felt like amassing concrete evidence. [Writing] was a way of proving to myself that I [could] discern reality from fiction, a way of affirming myself: I’m the author of this narrative.
Looking at your relationship as a case study, do you think you would have pushed back more on Adam’s need for control had the age gap been smaller?

He was definitely older than anyone I’d dated, and [that] was part of my initial infatuation. He was an adult! His house was clean! [Laughs]. There were definitely things that now, as a 34-year-old, would not impress me the way they did then. But most of our dynamic had to do with the fact that it was my first dominant/submissive relationship. I enjoyed that dynamic and was eager to explore it. But, unfortunately, we had no communication [about it], or boundaries, or rules.

So my first nonmonogamous relationship was also my first dom/sub relationship, [and] it was all on his terms. Adam embodied those traits that define patriarchy: valuing “rationality” over emotion; either/or binary thinking, the idea that you always need to keep moving forward, [that] progress means more and bigger. I found myself in a situation where I was aroused by playing into a grift that, as a feminist, I didn’t believe in. People who write about kink talk about [this] all the time, that the taboo can be very sexy. Like, “Why can’t I enjoy a dom/sub power dynamic with this older man [if] I’m choosing it?”
And you see how I start to deteriorate under that system. I didn’t have that foundation of safety, of feeling like I could say no. At the heart [of it was] a power imbalance. Now I’m with someone [also much older], but it’s an incredibly different dynamic.

There’s a meta moment early in the book, when you acknowledge that Adam might not be the ideal avatar for nonmonogamy to center in a book on that subject. And the person you’re talking to replies that you have to trust the reader. Do you?
I’m trying to! I’ve chosen to trust the reader because I don’t know how to tell the story any other way, and this is what happened. I gained a lot of courage from reading Carmen Maria Machado’s In the Dream House, which calls out her own hesitance to talk about the abuse [she experienced] because it was in a queer relationship. Memoir makes [the] argument that we have to talk about these things. We have to have more complex narratives, or else polyamorous people are going to be these weird unicorns who don’t experience any jealousy and are only in model relationships. That’s very unrelatable. Just like with monogamous relationships, you’re going to have any variety of outcomes.
That brings up the prominence of the term “ethical nonmonogamy,” which seems to imply that monogamy is intrinsically ethical, and anything else is intrinsically not. Is it odd that the term has been embraced by nonmonogamous people?
Dr. Wednesday Martin, [whom] I quote in Open, [thinks] people practicing nonmonogamy need to not use that term and act like they’re superior, [because] they’re just luckier. If they’re able to practice nonmonogamy, that means they’re living in a culture where they’re not putting their lives at risk [by doing so]. Her pointing that out made me step back from using [it]. “Consensual monogamy” could be a good distinction. I do think there is such a thing as practicing nonmonogamy ethically.  But it does kind of imply that maybe ethical nonmonogamy is morally on the same standing as monogamy, which doesn’t need that qualifier.
It’s silly when people think they haven’t practiced nonmonogamy. A lot of what we call “dating” is nonmonogamy—people juggling a few [partners] until they pick one. The difference is that not all parties are [typically] informed about that. [Laughs]. At least 21 percent of people in the United States report practicing consensual nonmonogamy at some point, but if we expand the [question] and ask “Have you ever cheated?”—well, as much as 40 percent of the population will have cheated at some point. That’s a form [of] nonmonogamy, right? It’s just not ethical.

It’s a lot easier to hide things than to face jealousy and insecurity. It’s not something that everyone wants. But it needs to be a normal part of the conversation…

Right. We prioritize monogamy but accept cheating as a way around it—as though lying about fidelity is somehow better than negotiated, transparent nonmonogamy.
We’re often just really bad at talking about these things, and there’s no real script for it. We’re taught that fidelity is [central to] romantic love. “Monogamy” and “commitment” are used synonymously—and they’re clearly not, because you can have a quote-unquote monogamous relationship where one person is cheating or hiding other secrets.
I wonder if something that makes outsiders skeptical of open relationships is the importance of communication. There’s this very heteronormative belief that if you find the one true person for you, you won’t have to kill the vibes by hashing out issues of desire or consent or kinks or whatever.
I think it’s hard! It’s a lot easier to hide things than to face jealousy and insecurity. It’s not something that everyone wants. But it needs to be a normal part of the conversation, because there are a lot of things [that exist] in between total monogamy and total relationship anarchy.
Once I came out [as nonmonogamous], people would start pulling me aside—especially women who were with men—and confessing how bored they were, how trapped they felt. But they didn’t want to break up with their partners. I had some women even say, “I really want to have a threesome with another woman.” And I’d say, “Why don’t you talk to your partner about that? He might be thrilled!” And they’d [reply], “I don’t know how to do that.” If it were more permissible and normalized, people might find that they have a lot [of] middle ground to explore together.

There’s a lot more openness now about taboo but very human realities like mental illness, drug abuse, even living with debt. Nonmonogamy hasn’t quite hit that tipping point.
Sex at Dawn’s central argument is that monogamy is a social construct that rose alongside the agricultural revolution at the same time that women began being property. To challenge monogamy is to challenge patriarchy and capitalism. That doesn’t mean that contemporary monogamy is inherently patriarchal or wrong. It just means that when heterosexual monogamy is [what] everyone is expected to fall in line with, and when you don’t [there can be] real social stigma and a lack of benefits or protections, of course [nonmonogamy] is political.
I’m a white cis woman who’s queer but who’s centering hetero dynamics that are very gender normative. And if, despite these privileges, [I’m] being called “brave” or asked “Are you worried you’re going to ruin your career?,” it’s understandable that people who not only don’t have those privileges but who also suffer other forms of discrimination aren’t [coming] forward to speak about nonmonogamy. I’m from the Bay Area, I have parents who aren’t going to disown me, I don’t have children. There are all kinds of reasons I might still get harassed, for sure, but I’m less likely to be punished by society than most. [So] I feel a responsibility to be as open as I can.
What do you hope readers take away from Open?
I hope that they feel less shame for their desires, and take resources from the book—podcasts to listen to, books to read, people and organizations to reach out to if they’re not sure if they’re experiencing abuse in their relationship; resources for how to practice BDSM and kink safely. My ideal would be that the book helps people feel braver about having these conversations.
–
Andi Zeisler is one of Bitch Media’s cofounders.

Read this Next: “Jackass” Made Me the Trans Woman I Am 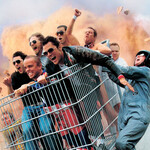