• “The L Word” could be coming back to television. [Variety]

• WOC astronomers face more harassment than any other group in the field. [Colorlines]

• A woman’s account of abuse is rarely taken seriously, even when that woman is Sylvia Plath. [Lit Hub]

• A series of murders went ignored for 25 years because the victims were sex workers. [Evette Dionne] 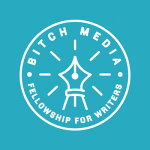 by Andi Zeisler
Today, we are thrilled to announce the writers who have been selected for the 2017 Bitch Media Fellowships for Writers.