• Deciding to lead with love, despite an enraging political climate. [Colorlines]

• Protestors shut down an event at UC Davis featuring the white nationalist Milo Yiannopoulos and the pharma bro Martin Shkreli (two men who have been kicked off Twitter for harassing women!). [Jezebel]

• With more than 50 events nationwide, protesters kicked off inauguration week (I hate typing that phrase) with “Our First Stand” rallies to save healthcare. [The New Civil Rights Movement]

• A Greenwich Republican grabbed a woman by the pussy. He was arrested. [Greenwich Daily Voice]

• Colorado representative and coward Mike Coffman held an Obamacare Q&A for his constituents and then snuck out through a back door early when more than a hundred constituents showed up.  [Teen Vogue]

• More and more politicians have announced that they won’t be attending Donald Trump’s inauguration. Here’s a running list. [Quartz]

• Selma is one of the most effective, well-crafted historical biopics that I’ve ever seen because it goes off the traditional narrative about the Civil Rights Movement, giving us a moment in history that feels immediately familiar to the moment we are currently living in.

• Season 6 offers an opportunity for Homeland to show how Muslim communities have been wronged by American policies.

• Still nursing that holiday burn-out? Use this BitchTape to get back to you. 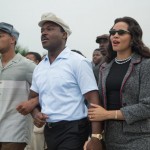 by Nijla Mu'min
"Selma" goes off the traditional narrative about the Civil Rights Movement, giving us a moment in history that feels immediately familiar to the moment we are currently living in.