• The Supreme Court’s decision this spring will likely affect trans rights for decades to come. [Rewire]

• Hannah Beachler dreamed up the visuals for Lemonade AND Moonlight. [Refinery 29]

• Behind the growing movement to bring back Native American cuisine and flavors that were largely lost due to the forced resettlement of tribes far from their homelands, as well as government policies that attempted to force Native peoples to abandon their languages and culture. [The Atlantic]

• Check out this beautiful papel picado that sends an important message. [Remezcla]

• Why are people horrible to women on the internet? [Feministing]

• The newest co-host of the “About Race” podcast discusses navigating workplace patriarchy.

• Author and activist Sarah Schulman connects the way we deal with interpersonal problems to the way governments and police forces exercise control.

• For the 1.4 million trans people in the United States, bathroom access is not an abstract political issue. It’s a daily problem.

Relevant: The Problems With Bemoaning a Rapist's "Once-Promising Future" 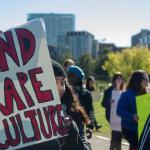