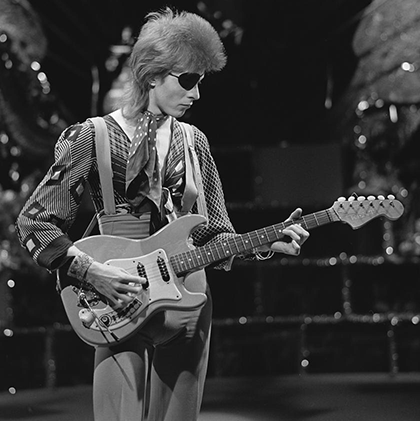 Photo of David Bowie filming a video for “Rebel, Rebel” in 1974. Photo via Creative Commons.

• David Bowie has died at age 69 after fighting cancer for over a year. He death has been mourned by other spacemen, but perhaps Tilda Swinton said it best in a 2013 speech about Bowie's impact, “You provided the sideways like us with such rare and out-there company.” [Popular Science, Vulture]

• Tagging along with a police sex crimes unit in New Haven reveals some reasons why the majority of sexual assaults are never prosecuted—legal hurdles include myths around “real rape,” failures to test rape kits, and courts not approving rapists' arrest warrants for months. [New York Times]

• At the Golden Globes last night, all the big awards went to movies I don't care about. But Blavity wraps up the “twelve Blackest moments” from the show. [Blavity]

• The trial of the second police officer charged in the death of Freddie Gray has been halted while the court debates whether another officer will be a witness in the trial. [CNN]

• Can Germany's welcome for thousands of refugees survive all the uproar around several asylum-seekers allegedly attacking women on New Years' Eve? [Guardian]

• Comedian and podcast-host Kumail Nanjiani talks about his love of The X-Files. [Mother Jones]

• Social justice-focused artist collective JustSeeds launched a program called “Community Supported Art”—you can pay a flat rate to get a year's worth of prints delivered to your door. [JustSeeds]

Leo DiCaprio specifically shouted out to the First Nations actors who worked on The Ravenant and called for protection of indigenous lands http://www.cbc.ca/news/aboriginal/leonardo-dicaprio-s-shout-out-to-first...