Happy Wednesday! Want to get On Our Radar in your inbox for free every morning? Sign up below.

• On Sunday, hundreds of Black cisgender and trans women and girls gathered at a #ForBlackGirlsOnly Johannesburg. Bitch Media’s Global Feminism Fellow wrote about the need for this kind of political space, and how Black women shouldn’t have to “defend our right to a safe space.” [Mail & Guardian Women]

• No matter who you support in this presidential election, we can’t deny the role gender norms play in our cultural representations and opinions of the candidates. How much of Hillary Clinton’s showing at the Iowa Caucus Monday night has to do with her “ballsy power moves”?  [NY Mag]

• In light of the recent spread of the Zika virus, which causes a rare birth defect in infants, government officials in countries like Brazil, Ecuador, Colombia, and El Salvador have told women to not get pregnant. But in a continent in which abortion is illegal in the majority of countries, it’s not right to put the sole responsibility of a public health crisis on these women’s shoulders. [Time]

• After donning a skirt and painted nails in a Vogue photo shoot, Jaden Smith was praised by many (and ridiculed by some) for his defiance of gender roles. [Mic]

• Many, many people experience is a miscarriage—but it’s often hard to talk about. Dr. Jessica Zucker talks about her #IHadaMiscarriage campaign to help people discuss this difficult experience. [Stuff Mom Never Told You] 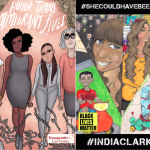 by Patricia Romero
Today we are reading about Transgender Day of Remembrance, anti-Muslim bigotry, and women in Hollywood.