On Our Radar: Feminist News RoundupSmash the Patriarchy

On Our Radar: September 7th

• A new study shows that women ask for raises as often as men—they just don’t get them. [Quartz]

• The Nepantleras are fighting back against the stereotype that only white people enjoy nature. [Fusion]

• On Lena Dunham and the virtuous white woman trope. [Equality for Her]

• Brock Turner officially registered as a sex offender this week, which he’ll have to do every 90 days for the rest of his life. [The Washington Post]

• On sex and Stranger Things. [Salon]

• From Some of us are Brave columnist Tamara Winfrey Harris, a conversation on sexuality, respectability, and Black girlhood.

• In Oh Joy Sex Toy, why you should just say no to douching.

• Let us solve your netiquette woes and we might feature your question in an upcoming issue of Bitch! 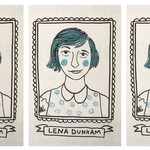