• On Monday, U.S. military’s first openly gay woman was killed in combat. Major Adrianna Vorderbruggen was one of six troops killed in Afghanistan and spent years working to repeal the “Don’t Ask Don’t Tell” policy that demanded her silence. [The Daily Beast]

• How much of America's gun problem is related to America's masculinity problem? An overwhelming majority of gun owners are men—and that number is increasing. “Possessing a gun is seen by many men as a straightforward way of subscribing to dominant masculinity.” [Quartz]

• Well, it looks like the “pink tax” is alive and well. A recent study from the New York City Department of Consumer Affairs found that, on average, products geared towards girls and women cost seven percent more than similar goods for males. Steer clear of the pink helmets. [Buzzfeed]

• In the Harry Potter sequel stage play Harry Potter and The Cursed Child Hermione will be played by Black actress Noma Dumezweni. Though a move in the right direction when it comes to Black visibility on stage and in literature, this author argues it comes a little too late. [The Mary Sue]

• A New York University official advices a prospective low-income student not to apply because he is too poor—raising the question, once again, of the rising prices of college tuition while college presidents and other administration officials are paid seven-digit salaries. [Think Progress]

• A two-year-old federal investigation brings some sobering news: 83 percent of New York City’s public elementary schools are not fully accessible to children with disabilities. The good news? The report has let to the Education Department’s setting aside of $100 million for accessibility projects. [The New York Times]

Anything I missed? Add it in the comments! 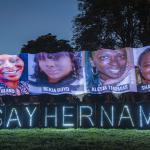 by Sarah Mirk
Today we're reading about Sandra Bland, homelessness in Seattle, and the film Tangerine.