The Overwhelming Whiteness of the Publishing Industry | Bitch Media

The Overwhelming Whiteness of the Publishing Industry 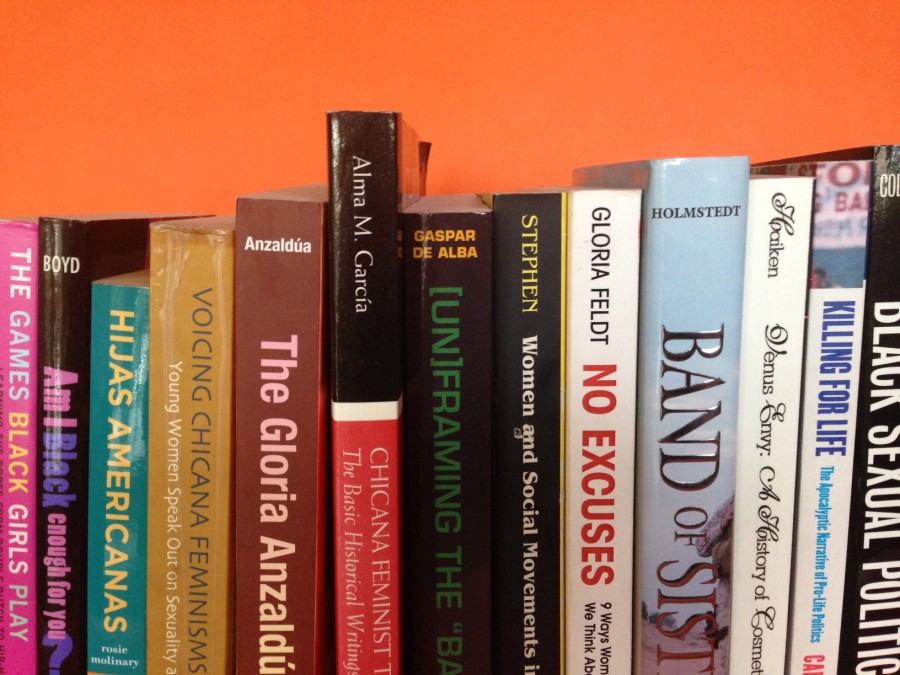 The brainchild of Jason Low of Lee & Low publishers, the Diversity Baseline Survey asked publishing houses and review journals to report the racial/ethnic, gender, and sexual orientation of employees, as well as the percentage of their employees who have a disability. Lee & Low is the nation's largest publisher of multicultural children's books and Jason Low was interested in getting hard data on the racial makeup of the publishing industry. “The number of diverse books published each year over the past twenty years has been stuck in neutral, never exceeding, on average, 10 percent,” wrote Low in a post today. “Countless panels, articles, and even conferences have been dedicated to exploring the causes and effects of this lack of diversity. Yet one key piece of the puzzle remained a question mark: diversity among publishing staff.”

The findings, which were released yesterday, indicate the majority of the people working in publishing are white women. Overall, according to the survey, the publishing industry is 79 percent white/Caucasian, 78 percent women/cis women, 88 percent straight/heterosexual, and 82 percent “not differently abled.” 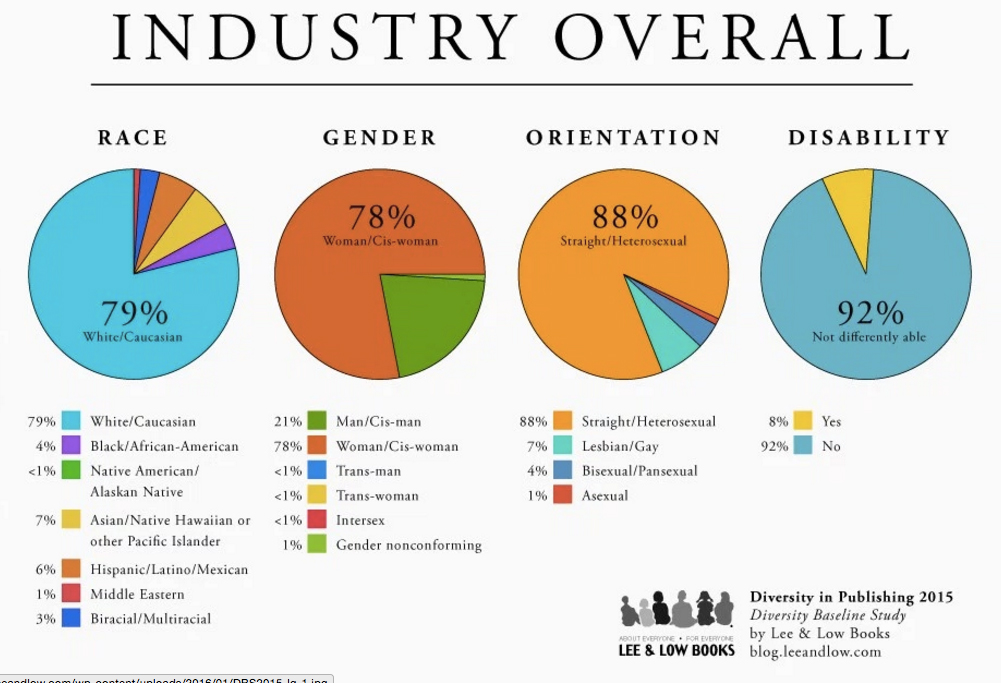 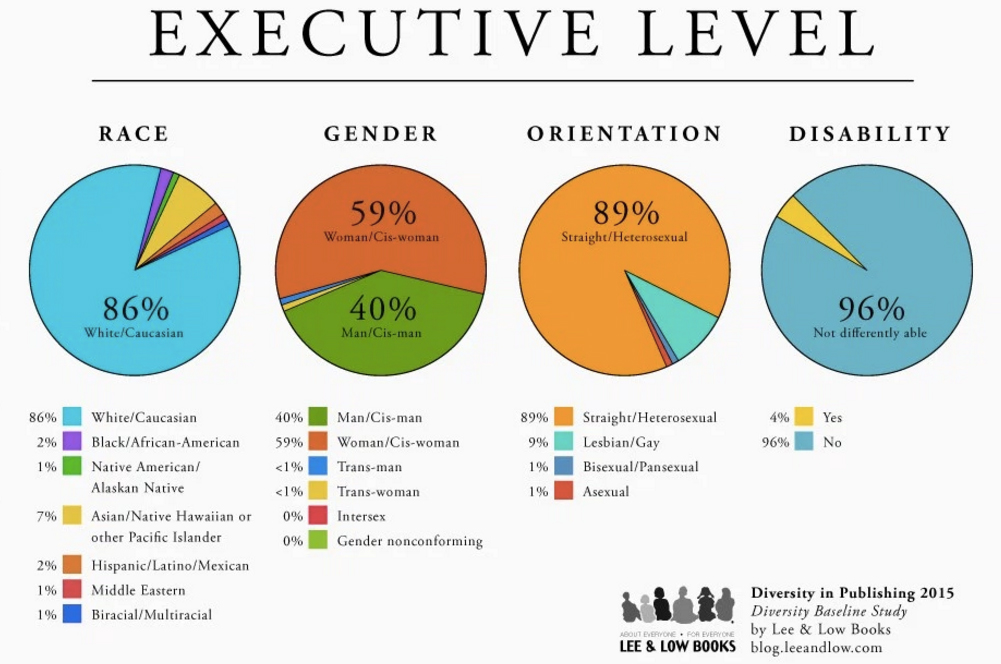 “Publishing houses that want to hire more African Americans need to actively recruit - they can't just assume those resumes will fall into their laps,” says Hannah Ehrlich, Lee and Low’s Director of Marketing & Publicity. Ehrlich believes one contributing factor for the lack of inclusion of African Americans is the issue of low starting salaries in the industry. The low pay for entry-level job “makes it all but impossible for lower-income people to enter the field.”

Publishers Weekly’s 2015 Annual Salary survey found the average salary for women in publishing is $51,000 annually and goes on to report “the dearth of minority employees directly affects the types of books that are published.” PW stated for the issue to be effectively addressed, “there need to be more advocates for books involving people of color throughout the business, including in management, editorial, and marketing executives in publishing houses, as well as among booksellers and librarians.” That survey also noted the gender wage gap: While the average salary for women in the field is $51,000, the average wage for men is $70,000.

Desiree Kannel, author and founder of Los Angeles-based Rose Writers Workshops, says when she was shopping her novel she specifically looked for an African American to represent her, feeling that they would “get” her book. “There were not that many [agents] to choose from. A bigger pool would help,” says Kannel. “I think some white agents and editors may shy away from multicultural texts, feeling that they are not qualified to judge or just scared of taking on subjects, topics with which they are not familiar.” 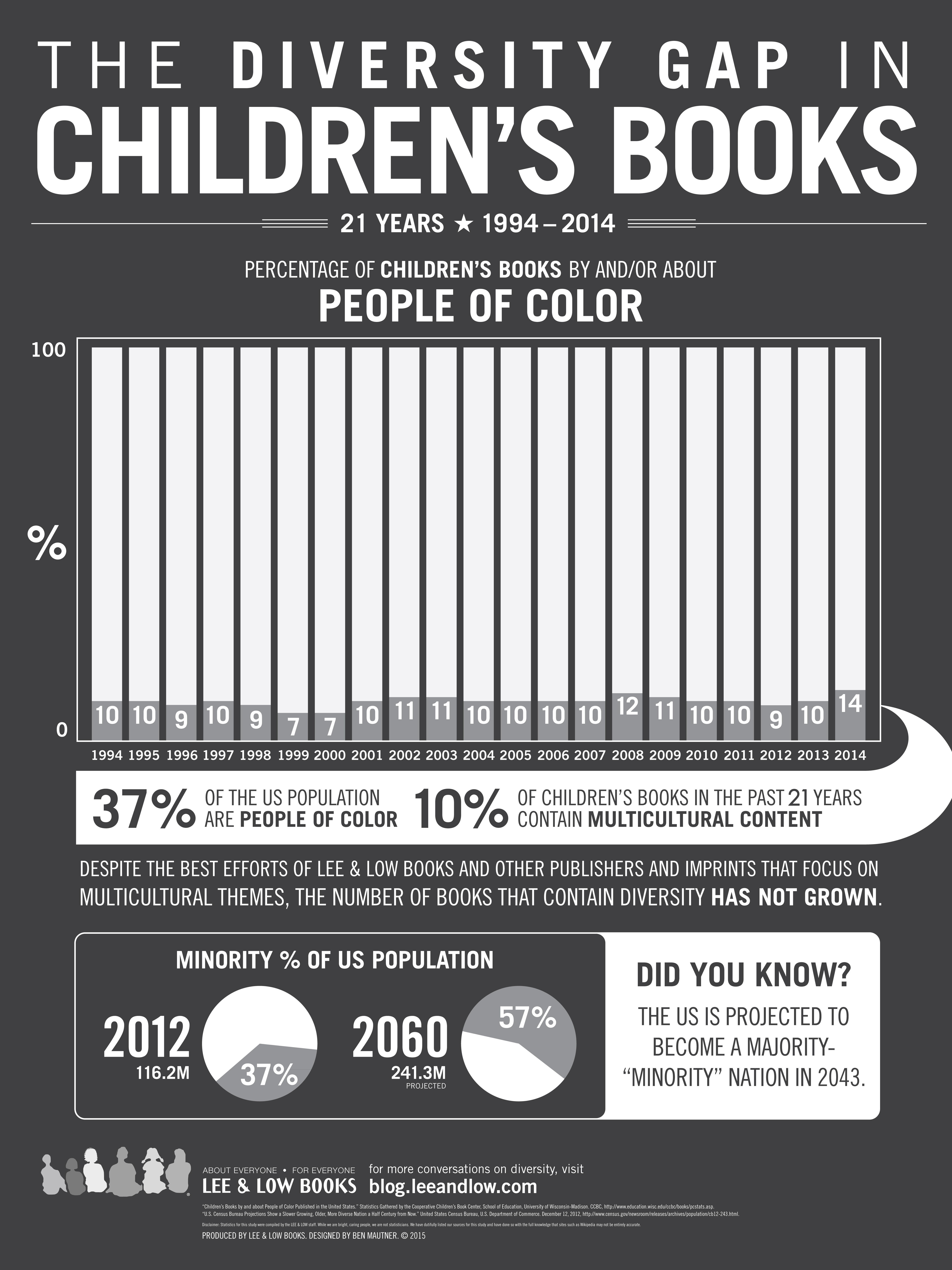 Because of all the hoops writers must jump through to get their book published, many Black authors opt to either self-publish their work on Amazon or turn to small pay-to-play presses and literally sell books from the trunks of their cars. Unfortunately, without the force of a major publisher behind a book—which guarantees widespread exposure that often drives sales—self-published authors are at a distinct disadvantage.

Lack of racial diversity isn’t just an issue in the publishing industry—it’s a reality in many writing fields. When #OscarsSoWhite was born, the systemic racial discrimination in the film industry became front page news in papers from the Los Angeles Times to USA Today. The irony is according to a Pew Research Center 2013 report, just 4.8 percent of daily newsroom personnel are African Americans, virtually unchanged from ten years ago. Journalist Jose Antonio Vargas made that point succinctly on Twitter last week when we started posting the hashtag #JournalismSoWhite with info about how important racial diversity is to having relevant and responsive newsrooms.

In September 2015, something extraordinary happened in the world of magazines. Beyonce, Serena Williams, Kerry Washington, singer Ciera, Misty Copeland, Queen Latifah, Amandla Stenberg, and Willow Smith were all were featured on covers of major women’s publications at the same time. Black Twitter cheered the milestone as a sign magazines geared toward women finally recognized black women for both their beauty and their marketability.

But what about those people whose currency is their bylines and not their famous faces? The critical question is: Will the appearance of highly popular celebrities gracing the covers of international magazines open the doors of opportunities for women of color as writers and editors? Essence is still the preeminent print publication for Black women. However, websites like HelloBeautiful, Madame Noire, and The Root also have loyal readerships day as they present platforms for women of color as writers and bloggers. According to the Pew report, many more women of color are bloggers on their own websites as well as on sites like the Huffington Post than are on the staffs of major newspapers or magazines.

In 2006, I was fortunate to have my first book published by a traditional feminist press. At that time, my editor warned me the publisher didn't know “how to reach black readers,” which meant their marketing capabilities were limited and fewer avenues for publicity and promotion which would hurt book sales.

Ten years later, publishers are still wringing their hands and trying to figure out how to get more people of color on staff—and by extension reach more readers. In response to #OscarsSoWhite, the Motion Picture Academy of America introduced steps to double the number of female and minority members by 2020. So what is taking publishing so long to step into the realities of multiculturalism? The writing is on the wall.

Related Reading: Books By People of Color Are Disproportionately Likely to be Banned.