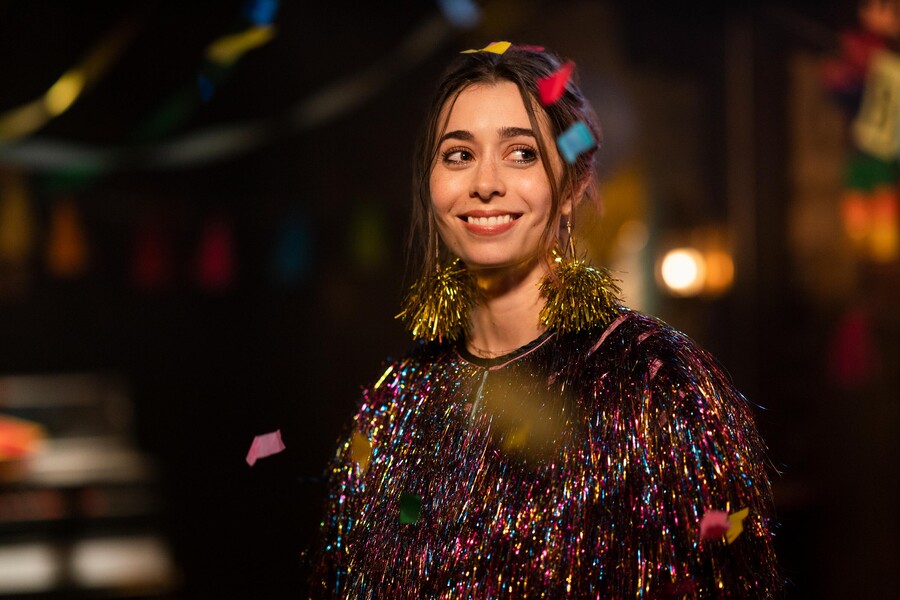 Time feels distorted: Days now blend together into a soup of indiscernible moments as we wait to fully understand the nature of our collective predicament. We’re trapped in cycles of outbreak and recovery, lockdown and reopening— a seemingly endless series of events stuck on repeat until we find some kind of lasting solution. The feeling is not unlike the looped events Sarah (Cristin Milioti), the heroine of Palm Springs, finds herself in. In this new Hulu rom-com, Sarah is the smokey-eyed black sheep of an all-too-Instagrammable family. Suddenly, she finds herself trapped in an eternity of celebrating her angelic younger sister Tala’s (Camila Mendes) wedding day, as it occurs in innumerable permutations. She ends up in this mess because of another wedding guest, the brooding Nyles (Andy Samberg), who’s been repeating the same day for so long he can barely remember a time before it (a familiar feeling to those of us in quarantine). In the face of utter powerlessness and looming nihilism, the pair sometimes find solace in each other’s company—and sometimes they don’t. While Nyles is happy to stay put, Sarah sets out in search of an escape from the time loop, even if it literally kills her.

Sarah’s jaded attitude toward the wedding is initially understood to stem from a vague sort of sisterly envy; she admits that her family views her as a “liability,” mostly due to her self-professed heavy drinking and promiscuity. But it’s not until later that the truth comes to light: The wedding day takes place directly after her latest morally questionable escapade. As time dissolves into something impossibly confusing and untrackable, Sarah begins to unravel the toxic behavior and pain from her past to build a new version of herself, one that is at once more personally accountable and ultimately more palatable to those around her. Somewhere in the folded fabric of the space-time continuum, Sarah steps out of her own way, and those aspects of her messy personality begin, for the most part, to straighten out.

Groundhog Day (1993) stands as the prototype for the time-loop scenario in popular imagination; it weaves together themes of the redemptive power of love and the inherent fear of change that many people experience. Most other time-loop films intersect with the sci-fi genre: Blockbuster hits like 2012’s Looper and 2014’s Edge of Tomorrow come to mind, but they’re mostly forgettable movie-going experiences. Saccharine romance flicks also often play with themes of time, with 2009’s The Time Traveler’s Wife and 2013’s About Time (both, strangely, starring Rachel McAdams) utilizing the trope. Meanwhile, in the world of dark comedy, a group of wayward women (not entirely dissimilar to Sarah) have taken up the mantle and redefined the stuck-in-time trope to critical success and wide viewership. Milioti’s deft portrayal of Sarah is the most recent example, but Netflix’s 2019 dark comedy Russian Doll saw Natasha Lyonne as Nadia, a woman trapped in a time warp, attending the exact same birthday bash evening after evening.

It also happens to be, no matter what changes she makes, the night she dies. Thursday after Thursday she journeys through the streets of New York (and has many odd encounters with friends and strangers), as she faces head-on the mundanity of the human experience, while simultaneously delving into the horror and reality of her own mortality. It’s an upending of the premise laid out in Groundhog Day, as it manages to look directly at bigger concepts like life and death. In a blur of birthdays, she chips away at the intergenerational trauma she has been barely—through a parade of cheap thrills and questionable life choices—to ignore until her mid-thirties. It’s a dark and quintessentially New York story that stands in direct contrast to the vibey visuals of Sarah’s Palm Springs black hole, yet both exist in an uncannily like-minded universe.

Addressing self-destructive behaviors and attempting to make amends is worth the work and introspection, but so is making space for life paths that deviate from societal expectations.

So too we find Kristen Bell as thirtysomething Eleanor Shellstrop in The Good Place. She’s a self-described “dirtbag” from Arizona who’s generally perceived as selfish and immature by the outside world. She’s the kind of person that, for instance, cheated on a BuzzFeed quiz about Kardashian slang among many other immoral deeds. Over the course of four seasons, Shellstrop assembles a rag-tag group of friends who sometimes attempt to teach her how to be a better person and other times fuel her unsound life choices, as she navigates a technicolor afterlife. Parts of the NBC sitcom are based within the time-loop phenomenon, and like the other “flawed” women trapped in the amber of a moment, it’s only through the repetition of kind acts and the growing love and support from her friends that she’s able to trade her protective shield of selfishness for a chance at cosmic redemption.

It’s an apt metaphor for our current state of uncertainty and inertia: There’s always the hope that we can put the pain and exhausting boredom of the human experience to use by way of repetition, that each day can bring us closer to a better, happier self if only we try hard enough. It’s worth noting though, that for Gen X and millennial women, this notion is amplified—it’s been drilled into the collective consciousness by a culture of self-improvement and an industry of self-care. Too often, women find themselves trapped in an impossible balancing act between career and family; if either or both milestones aren’t met by a certain time, women are written off and too often misunderstood. Portrayals of women as flawed human beings, as anti-heroes with realistic failings, are welcome and important parts of storytelling, but it’s hard to ignore that for women like Shellstrop, Sarah, and Nadia, the pursuit of betterment means losing a part of themselves along the way.

It’s worth questioning why they must sacrifice parts of their personalities, parts of their raucous messiness, and the risky choices and questionable actions that ultimately help them live on their own terms. This is not to say that the more toxic aspects of each character’s behavior can’t benefit from some kind of overhaul, but in the process of laboring day after day to smooth their rough edges in order to become more palatable to the world, crucial aspects of their fire and personhood are lost. For Sarah, redemption proves to be soul healing in the end; she finds love and a renewed perspective on life—but the trade isn’t treated like a trade at all and is instead presented as a worthy pursuit. Addressing self-destructive behaviors and attempting to make amends is worth the work and introspection, but so is making space for life paths that deviate from societal expectations for people who don’t choose career or family or partnership but create something of their own that’s altogether worthwhile.

Read this Next: In “Palm Springs,” Consent Is a Murky Line 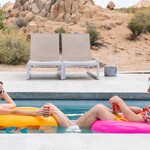 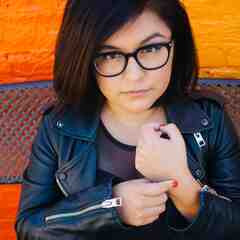 Angie Jaime is a writer first and a whole lot of other things after that. Her work spans genres, themes and forms all over the internet, which you can find at angiejaime.com.

Confronting Teen Sexuality in "The Diary of a Teenage Girl"

The Lasting Impact of the “Fleabag” Jumpsuit

You’ve Heard This One Before