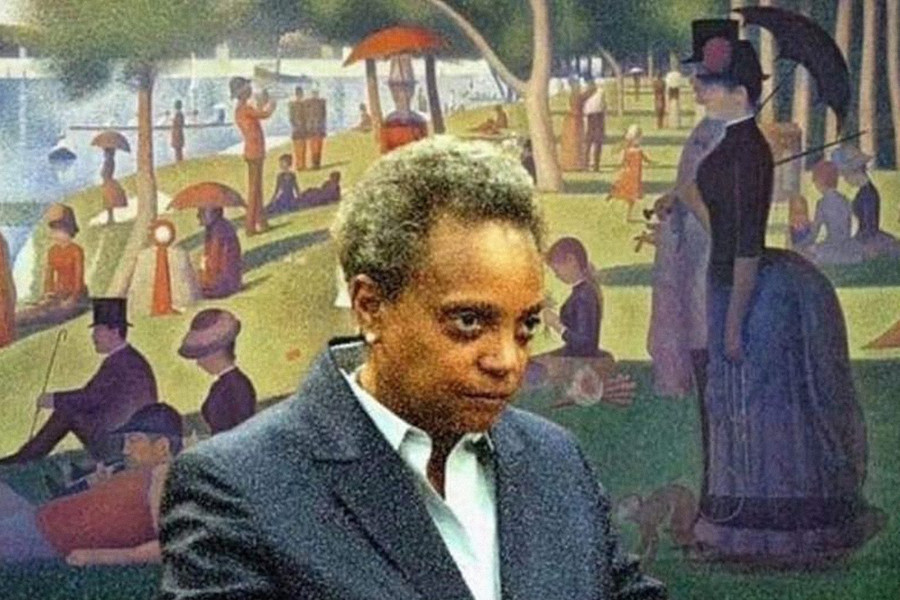 Meme of Mayor Lori Lightfoot in A Sunday Afternoon on the Island of La Grande Jatte by Georges Seurat (Image credit: Josh Fontenot)

During the early 2020 presidential election campaigns, memes were a popular way to engage with political candidates. People Photoshopped Animal Crossing characters into presidential debates, ran with the “I am once again asking for…” quote from Bernie Sanders’s December 2019 fundraising video, and revived fake campaign posters from 2016. Tracing the origins of memes is an imprecise project. But if you came of internet age at the same unfortunate time for memes as me, popular memes included the Trololo Guy and rage comic characters like Trollface, as well as that god-awful “You Don’t Say” face based on Nicolas Cage. But recent years have found memes evolving from somewhat harmless entertainment embedded in digital subcultures to instruments of political commentary and power themselves.

Much of the power of memes lies in their potential for virality, which makes them an effective form of political communication in a media-choked landscape. Memes can spread quickly and with less effort than more traditional campaign advertising, especially for users whose media consumption is largely online: You might opt to skip out of presidential ads on YouTube, for instance—I know I do—but you probably take the time to look at the memes that come across your social-media timelines. In October 2019, Joan Donovan, director of the Technology and Social Change Research Project at Harvard, wrote in the MIT Technology Review about the danger of dismissing extremist political memes as jokes, noting that “Meme wars are a consistent feature of our politics, and they’re not just being used by internet trolls or some bored kids in the basement, but by governments, political candidates, and activists across the globe.”

Indeed, the influence of weaponized memes was recognized by state officials all the way back in 2005, when a Marine Corps major named Michael Prosser wrote a master’s thesis titled “Memetics — A Growth Industry in US Military Operations” to propose the formation of a meme-warfare center. And though the United States may not have a formalized meme-warfare center just yet, we are currently seeing increased weaponization of both extremist propaganda about the COVID-19 pandemic and memes about the politicians who discuss it using the language of war.  In late March, after New York emerged as the epicenter of the country’s coronavirus crisis, Governor Andrew Cuomo tweeted that “New York is fighting a war against the virus…” and followed up four days later with a tweet thanking doctors and calling them “the unwavering front-line soldiers, angels, and heroes in this war.”

Cuomo’s prominence in driving awareness of the pandemic’s urgency and the federal government’s insufficient response has made him particularly memeable. Cuomo memes picturing a terse onscreen exchange between the governor and his younger brother, CNN anchor Chris, have emerged, as have ones that celebrate a “bromance”  between Cuomo and Dr. Anthony Fauci. And then there’s the whole genre of tweets crushing on Cuomo and referring to him as “America’s crisis daddy.” But the use of memes to romanticize Cuomo’s leadership has the effect of tacitly minimizing his political track record, which is a lot less heroic. Anqa Khan, who lives in Brooklyn, told Bitch, “With Cuomo and the COVID-19 crisis, I feel like I’ve seen lots of memes thanking him for his ‘competent’ leadership or even fetishizing his ‘good looks.’ This makes me, in simple terms, want to die.”

For Khan and many other New Yorkers of color, it’s nauseating to see fawning memes about the governor’s possible nipple ring while knowing that he has exploited coronavirus panic to roll back bail reforms, attempted to slash the state’s Medicaid funding in early April, and abruptly cancelled a special election in what was called a “blatant anti-democratic power grab.” Memes starring Chicago Mayor Lori Lightfoot similarly proliferated during the coronavirus pandemic. The image of an unsmiling Lightfoot went viral after she shut down some of Chicago’s popular trails in late March and drove through the city to personally enforce its stay-at-home order. Chicagoan Danny Martinez created the Instagram account “Where’s Lightfoot,” where nearly 60,000 followers can go to locate Lightfoot’s stern face in Photoshopped images that nod to Where’s Waldo. Chicago resident Erin told Bitch that she started off enjoying the memes, seeing them as a “way for Chicagoans to laugh together even though we were apart.”

In contrast to Cuomo, who hasn’t really weighed in on the memes about him, Lightfoot has participated in the joke on Twitter, discussed her omnipresent image with The Daily Show’s Trevor Noah, and told the Chicago Sun-Times that she’s “enjoyed” the memes. And though Lightfoot sees her memeification as simply another way to reiterate her stay-at-home messaging, her participation in their virality has unnerved Erin and other Chicagoans. “I think…as Lightfoot and the city’s social media got ahold of [the memes], they started feeling empty and more like propaganda [or] a PR stunt,” Erin says. “Especially after Lightfoot had such a bad start to 2020 with her piss-poor response to the Chicago Teachers’ Union strike.”

Erin is referring to the letter Lightfoot issued to the Chicago Teachers Union in October 2019, urging the union to end its strike without a settlement. Before the strike began, Lightfoot had refused to include provisions addressing issues like student homelessness, increasing class sizes, or affordable housing for Chicago Public School families and educators within contracts. Her administration was also sued by #NoCopAcademy activists in 2019 as the city fought to keep documents relating to its $95 million training academy plan hidden. “Now she’s trying to capitalize on this sudden goodwill around her image and trying to erase all that anger towards her,” says Erin. “Instead of [addressing] memes, she could be cancelling rent or enforcing the stay-at-home order in majority-white, affluent neighborhoods instead of harassing young Black teens in their neighborhoods with a horde of cops following behind her.”

Neither Erin nor Khan thinks that memeing politicians in general should be off-limits. “When I think of memeing politicians, I think of it as a means of critique,” says Khan, adding that creating and sharing memes can also be a “coping mechanism that allows sustainability of critique.” After all, keeping up with politics can be depressing even in good times; if you use a meme to convey your point, that element of humor stands apart from the usual grey cloud encompassing these conversations and makes them easier to have with greater numbers of people. This, combined with the human impulse to use humor as a coping mechanism, is part of why surveillance memes are so popular among Muslim youth.

Similarly, Erin feels memes are a great tool for criticizing politicians. “I don’t think you can deny the cultural impacts of [memes] anymore—they are simply a part of how we communicate now. [Memes] are concise and easily digestible while still having layers, and are able to convey multiple meanings with just a few words and pictures.” And humor, of course, has always been a potent way to discuss politics and politicians: Khan recalls watching Pakistani news media with their parents, who would crack jokes and use ridiculous voices to mimic politicians. “In circumstances where it has perhaps been too risky to criticize systems out loud, humor has been a way to often the blow and make it more [digestable] to a larger audience,” Khan says.

“I’ve seen lots of memes thanking [Cuomo] for his ‘competent’ leadership or even fetishizing his ‘good looks.’ This makes me, in simple terms, want to die.”

There is one key reason memes stand apart in a range of political coverage that includes everything from established news reporting to editorial cartoons to satirical forums like The Onion. A single person can create, publish, and disseminate a meme entirely on their own, and its potential to go viral doesn’t require any formal connections or affiliations to do so. This can be particularly useful for grassroots organizers who may not be able to get their messages past an editorial board. But ultimately, that person can’t steer the outcome or impact, and the memes of Lightfoot illustrate how memes can move from the realm of political critique and education to that of political PR and propaganda. As Donovan cautioned in the MIT Technology Review, “[A]s memes are shared they shed the context of their creation, along with their authorship. Unmoored from the trappings of an author’s reputation or intention, they become the collective property of the culture.”

On social media, for instance, Lightfoot can play into memes perhaps easier than she would be able to at a press conference. She can become more likable through her relatability—a noticeable trend for politicians across the board on social media. Just look at how former presidential candidates Elizabeth Warren, Beto O’Rourke, and Pete Buttigieg all utilized their dogs on social media to underscore their approachability and appeal. Though the demand that politicians be someone you’d want to have a beer with is a relatively new one, Khan points out that these efforts are “easily constructed through social media, whether it’s through sound bites with their families, [or] them appearing on a comedy show.” Digital media has blurred the lines between pop culture and politics, and we are now expected to treat elected officials if they are celebrities and not leaders whose job is to work on behalf of the people who elected them. “Politics is supposed to be about their politics,” Khan adds. “If a politician has a cute dog, that means nothing to me. Will they still fight for universal healthcare? There is no correlation, but I think the constant need to be entertained and build out a narrative around our leaders makes us draw false positives between the two.”

By itself, memeing politicians isn’t evil. Erin said, “I feel that the only point that they are harmful are when politicians get a hold of them to forge goodwill, making people forget that they are public servants who should always be held accountable for their words and actions.” But as leaders continue to refer to the ongoing pandemic as a “war,” it’s more important than ever to have politicians who are relatable, funny, and likeable to turn to—and even as they screw over communities elsewhere, the unchecked proliferation of memes allows figures like Lightfoot and Cuomo to achieve those goals.

Read this Next: Lose Yourself 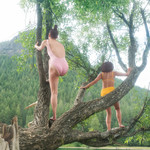 by Vanessa Taylor
What does it mean to be able to reject the gaze before it even happens?