Pandemics Reveal How Fragile Our Systems Are | Bitch Media

World on FireLike Natural Disasters, Pandemics Reveal How Fragile Our Systems Are 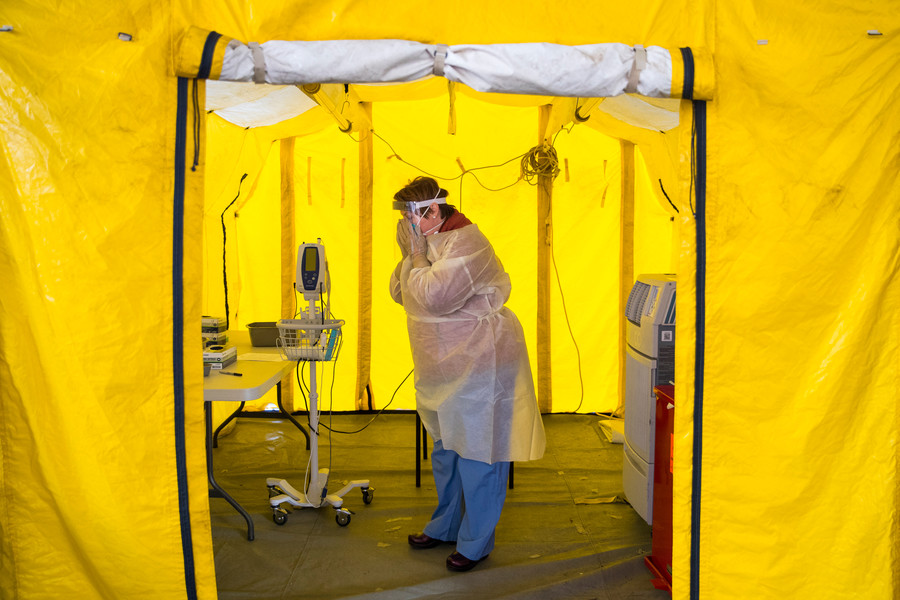 Nurse practitioner Amy Israelian puts on protective gear in a tent in the parking lot of the Newton-Wellesley Hospital before testing a possible coronavirus patient in Newton, MA on March 16, 2020. (Photo credit: Adam Glanzman/For The Washington Post via Getty Images)

We’re in a state of disaster—literally. The coronavirus has not only destabilized daily life and uprooted the economy, but it has killed upwards of 100,000 people globally. Another unexpected casualty? The systems meant to protect us are floundering.

In March, President Trump decided to place the Federal Emergency Management Agency (FEMA) in charge of handling the COVID-19 crisis, with FEMA replacing the Department of Health and Human Services. This makes sense on its face: FEMA is the department most often tasked with responding to natural disasters by distributing resources and navigating multiple levels of government jurisdictions. But the agency is spread way too thin, and is already scrambling; furthermore, considering its complicated history with languid response times and deprioritization of poor people of color, the organization isn’t necessarily equipped to handle a disaster on this scale. What the coronavirus has revealed is that the bones of federal bureaucracy are broken, and have been for a long time. The federal government can’t just appropriate a fragmented agency and expect it to organize efficiently enough to distribute vital resources like ventilators and face masks in lieu of a system specifically designed to respond to a pandemic.

Federal funding through FEMA has always been marred with bureaucratic red tape. People who need their homes repaired after a hurricane, or who are forced to participate in a buyout program because their houses succumbed to continuous flooding, find themselves attempting to navigate a space that feels almost intentionally tricky. Even in an emergency, the process is convoluted. A governor, or tribal executive, has to request help from the government, and then the president has to sign a Major Disaster Declaration. That declaration then allows FEMA to allocate federal funds and physical assistance.

But for the first time in FEMA’s history, there is a Major Disaster Declaration in all 50 states, as well as three of the four territories—something President Trump saw fit to brag about on Twitter in an April 12 tweet as though it were an accomplishment and not a nightmare: “We are winning, and will win, the war on the Invisible Enemy!”

In truth, FEMA can barely handle hurricane season when projections aim to hit multiple states, let alone mitigate a virus impacting the entire nation, and its shortcomings (slow response times, too many appraisals, ttoo selective about states or territories to help) are impossible to ignore. Institutional bias has characterized its response to the worst natural disasters of recent decades. Compare the agency’s 2017 response to Hurricane Maria in Puerto Rico in 2017, where it took some 11 months to get their electricity back; and the more focused, direct response to Hurricane Harvey, which hit Houston, Texas only weeks before. It took 10 days for FEMA to approve permanent disaster work for Houston, but 43 to do the same for Puerto Rico. FEMA’s most memorable blunder was its response to 2005’s: Hurricane Katrina. At the time, the agency was led by political appointees with little to no disaster-relief experience, and approximately 1,800 people died either in the storm and the resulting flooding, or in an aftermath made worse by government ineptitude. The unavoidable lesson of Katrina was that the racial makeup of Gulf Coast cities and neighborhoods that bore the worst of the storm’s impact informed FEMA’s largely inadequate response. In a 2015 postmortem of Katrina’s aftermath in Jacobin, Jonah Walters noted that “[T]he death rate for black residents was as much as four times higher than that of non-black residents. The areas where the most bodies were recovered were low-lying, flood-prone neighborhoods with high black populations.” In other words, can we really trust an organization that couldn’t foresee which communities would be impacted first by Katrina’s catastrophic storm surges to now properly map out the cities that need the most ventilator assistance?

Further complicating the issue of FEMA taking over the COVID-19 fight is the reality that its own staffers are not immune to the virus. An April 3 New York Times piece on the agency reported that the number of staffers available to lead field operations had fallen from 44 to 19; the agency hasn’t yet to disclose how many medical supplies the country has left; some governors, like J.B. Pritzker of Illinois, have received only a fraction of requested supplies. “[W]e’re out on the open market competing for these items that we so badly need,” Pritzker said on a March episode of State of the Union. Governors in Massachusetts and Colorado and hospital executives in Kentucky have complained that FEMA was “commandeering” their supplies, and a loss of federal funding has forced the closure of drive-through testing sites in Pennsylvania.

And, of course, natural disasters don’t care that the country is in the grip of a pandemic: flood and hurricane season is coming. “The toll of FEMA’s dual mission—responding to the COVID-19 crisis, while also handling its normal job of dealing with natural disasters—is beginning to show up in its staffing figures,” Times reporters Zolan Kanno-Youngs and Jack Nicas wrote. FEMA was already subject to budget cuts—in August, Trump diverted $155 million to fund his border wall—so being tasked with expending already limited resources on a pandemic when its funding is earmarked for natural-disaster relief (and, increasingly, for slow-onset climate-change effects like erosion and sea-level rise) adds additional pressure. As ProPublica reporter Abrahm Lustgarten recently explained, “[D]isasters that might have otherwise proved manageable will compound and amplify COVID’s effects until the hurt—measured in lives, livelihoods and property damage—winds up worse than it might have been from any one disaster alone.”

And anyone who studies disaster studies can tell you that following every natural disaster is a recovery period that tends to be even worse. “Disasters happen all the time and yet, after each one, communities are left to nearly reinvent the wheel,” wrote Samantha Montano, an assistant professor of emergency management and disaster science, in a recent piece for Gizmodo. “Few communities have disaster recovery plans before calamity strikes so they are left to largely improvise the recovery efforts. Not only can this leave us vulnerable to reactive policy change, but it can leave communities vulnerable to outside interests that want to take advantage of the situation.”

With COVID-19, conditions are changing rapidly, and only time will tell who our heroes become. But what we know for sure is that this won’t be solved via a mass of band-aid solutions and self-congratulations. It’s going to take a coordinated effort by experts, and the resources to support those efforts; not a government that’s hoping to make its own response look good, regardless of the toll.