Part III: Is Anyone Surprised That Bustle Is Ghosting Us? | Bitch Media 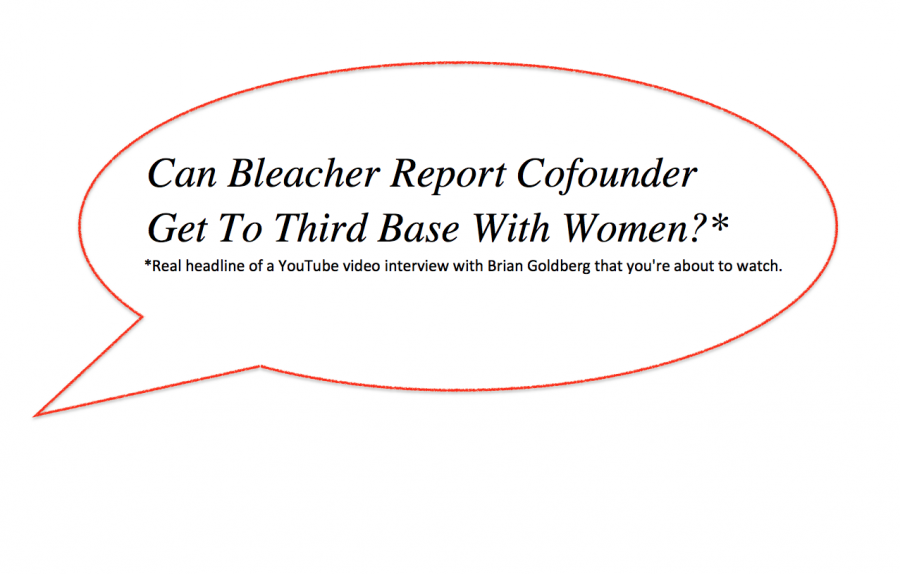 We wish we were kidding.

If you’re wondering how things with Bustle are going, the answer is: Silently.

Bustle doesn’t really have a leg to stand on (though they do seem to be full of weak-ass memes). But they are big enough and lawyered-up enough to do what corporate media does best: Ignore something until it goes away.

What do we mean?

Bustle is still using the BHive name for their “exclusively inclusive” market-research/user-data mining program. We sent a cease-and-desist letter their way on June 7, and a second this past Monday, June 19. Here’s what it said:

I am writing in response to your email of June 9, in which you said that BDG Media Inc. (“Bustle”) was willing to comply with our request to cease using the “Bustle BHive” name.

Nevertheless, Bustle has persisted in using the “Bustle BHive” name, and I am writing again to request that you immediately cease your use of the BHive name in the United States.

Their response? Crickets. Not even an acknowledgment of our (admittedly no longer very topical) Mitch McConnell reference. Rude.

It’s clear that the folks in charge at Bustle are hoping that we’ll run out of steam and this whole fiasco will just get left behind as an increasingly frantic news cycle keeps doing its thing. They know that we don’t have the resources to force their hand with a proper lawsuit, and they’re waiting us out.

Right now, we have two options. We either:

1. Need to let this go, or
2. Increase the pressure and public callouts until Bustle has to stop using the BHive name.

At this point, Bustle has so much SEO-friendly content generating pageviews for advertisers that we’re not going to be able to hit Bryan Goldwhatever in the wallet if everyone reading this stops reading Bustle. So that leaves us with exactly one way to get our way: Good ol’ guilt. Can we shame Bustle out of ripping our work? With your help, we can certainly try.

Here’s why we don’t want to just let it go: Mainly, because could there be a clearer example of corporate media literally silencing any opinion that doesn’t serve it? Not only has Bustle not responded to us directly, folks there have also been blocking and deleting comments from the Bitch community calling them out on social media.

But more important is the fact that what we do here matters. Which Bustle clearly knows or they wouldn’t be putting so much effort into trying to steal our style. Do you know how Bustle measures the success of any article they run? Number of clicks and the ad revenue that those clicks generate. (In fact, here’s Bustle founder and CEO

Bryan Goldberg telling you himself:

The description on YouTube literally reads: “After helping build and sell Bleacher Report, Bryan Goldberg tells Rocco Pendola that he’s set to duplicate that success with a multimedia publication geared towards women.”

How does Bitch measure success? By connecting readers from all over the world to the issues that matter the most to feminism right now, and helping our community enact real change. That’s why we send you On Our Radar with daily updates on the most pressing matters and what actions you can take on the spot. That’s why we go into overdrive when something big happens and curate all the information you need in “What Just Happened?” That’s why we don’t just publish “diverse” writers (whatever that means) for “well-rounded content,” we prioritize them and make that amplification a core part of our mission.

Bustle may have seen, via social-media response, that the Bitch community is real, it’s united, and it gives all of the fucks when it comes to calling out the capitalist co-optation of feminism into listicles like “8 Common Deodorant Mistakes Women Make That Make Them Smell” and seemingly endless Kardashian Kontent. But Bustle expects to win, and they have a good chance of doing so.

All of this is an admittedly long-winded way of saying that we’re not giving up. We have one shot at winning against a company that embodies corporo-patriarchal marketplace feminism. And it involves YOU.

Please share this image that outlines what the Bustle BHive can do for you—we fixed it for you, Bustle!—and tell the entire Internet, which has a way of amplifying things juuuuust when folks wish they’d quiet down: We won’t be quiet until Bustle does the right thing and stops using the BHive name! 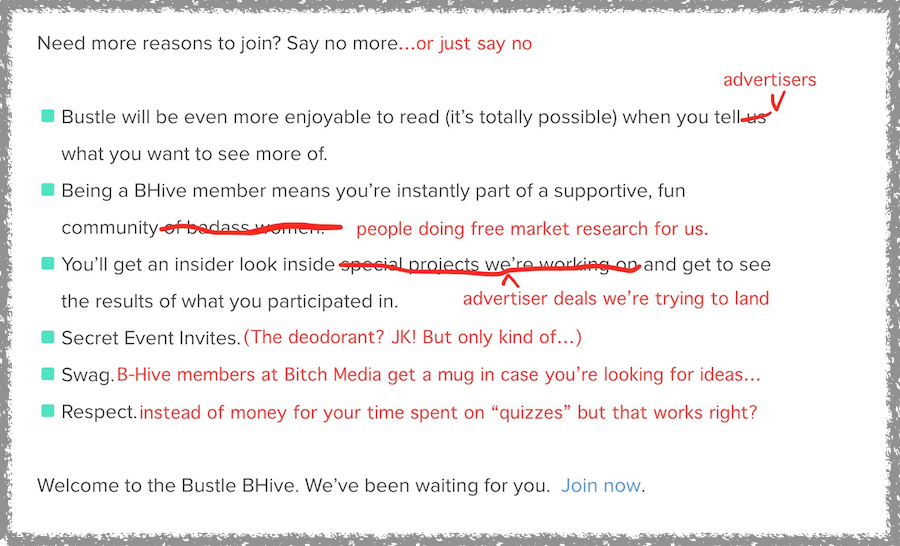 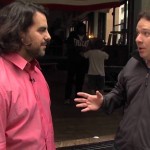