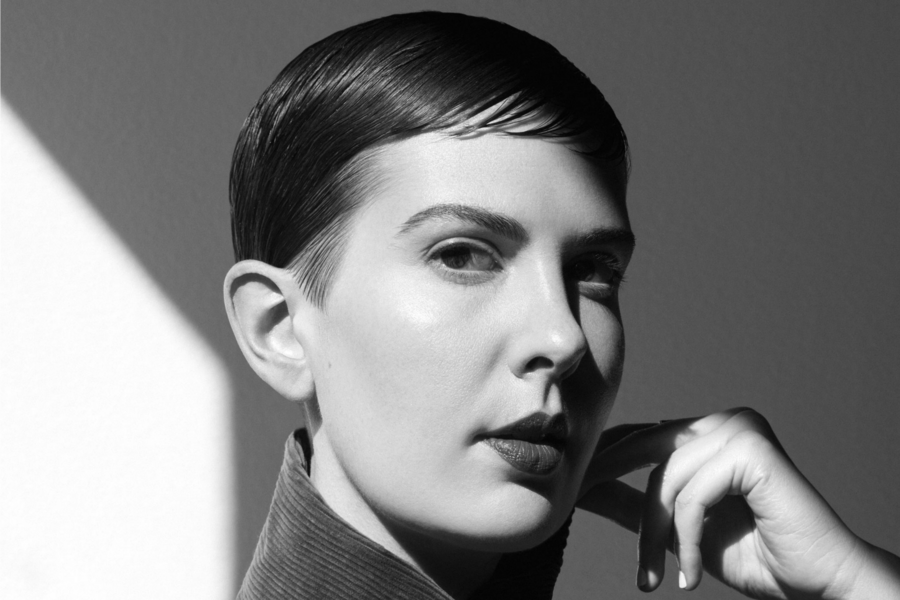 Patricia Lockwood, author of No One Is Talking About This (Photo credit: Thomas Slack)

Patricia Lockwood’s first novel, No One Is Talking About This, is one of two extremely online books released in the last month—the other is Lauren Oyler’s Fake Accounts—that take on modern online life in different ways. Lockwood’s novel is deeply autobiographical, as anyone who follows her on Twitter knows: She’s (in)famous for her irreverent tweets, which can vary between horny, heartfelt, and utterly mystifying, so it’s unsurprising that the novel’s setting and style speak to a life spent deeply entrenched in the internet. No One Is Talking About This, inspired by real life events that become especially thorny and critical as the novel wanes on, delivers a complicated sendup that manages to be a commentary without moralizing. Its true finesse shines in the novel’s second half, as she pairs formidable talent with a rare sensitivity.

No One Is Talking About This follows an unnamed woman in close third, with a writing style designed to be reminiscent of the frenzy and tension of scrolling through Twitter. Indeed, much like the social platform, the book fairly begs for obsessive reading meant to be completed in a single sitting as we watch our narrator navigate “The Portal” and her unexpected internet fame after posting “Can a dog be twins?” The text is filled with insider jokes and references that will be instantly dated (“She washed her legs under the fine needles of water, for she had recently learned that some people didn’t”) and captures the emotional seesaw of living on social media. At one point, our protagonist is in her therapist’s office trying to learn how to hate the police, and then, she’s making jokes about trapping George Washington’s head in a quarter. “There is still a real life to be lived,” the narrator says, but there doesn’t seem to be any clear path to it.

Throughout, the book offers sharp commentary about people who are extremely online: She asks her husband to put her phone in a safe and promptly regrets it. Her husband has to drag her out of The Portal when she’s in too deep. Her brother tells a story about a friend who saw his baby on an ultrasound and said “Saw my daughter’s tits on the ultrasound. Looked pretty good!” When her brother responds “Damn, dude, really?,” the man replies “I don’t know how to act. I’ve been this way so long, I don’t know how to be anymore.” In a recent interview with AnOther, Lockwood spoke to the strange tension of living with one foot on the internet and one foot outside it, unsure what to do with ourselves: “We’ve adopted meme language to apply to really profound situations, like the birth of a kid or getting married,” she said. “I think people do feel discomfort about that.” This divide goes both ways, with the narrator noting that parents can’t stop using horny emojis, not understanding the fraught politics of the eggplant emoji no matter how many times they’re told.

Despite its slightly frantic edge, Lockwood’s prose glitters. And while it is easy to luxuriate in it, the book cultivates a sense of anxiety and tension, for “‘girl goes online’ is not a compelling narrative arc capable of sustaining a novel,” as Kate Knibbs puts it for Wired. What begins to feel performative, arch, a splay of erratic text on the page, abruptly whiplashes the reader into the back half of the novel, where the hints seeded throughout the text suddenly coalesce: Something has gone very wrong with the main character’s sister’s pregnancy—and a baby unlikely to make it to term drags her into a “real life” family nightmare. Back in Ohio with her family, abortion isn’t an option, thanks to a recently signed law and the values of their parents; there will be no grim interstate trip to a clinic that handles later abortion, no accident triggered by going running, as suggested by a social worker. Instead, her sister will carry the risky pregnancy far enough that a doctor can legally deliver the baby, who has Proteus syndrome, which causes tissue overgrowth. The care team expresses skepticism about whether the baby will survive, and warns the family that if she does, her life expectancy will be short.

While Lockwood’s later chapters maintain her erratic style, delivering short updates punctuated by musings and events, the experience turns more inward, allowing her to walk a fine line with grace. She’s telling a fictionalized version of a real family tragedy, but by keeping a tight inward focus on the main character, she’s telling her story, respecting her sister as a real-world person. Even the sister in the novel is respected as her own entity. Fictionalized versions of family tragedies often leave me feeling uneasy, raising questions of consent and the ability to actively decide to participate in the storytelling. These stories strip bare deeply emotional and private things in a way that can be perturbing, feeling sometimes more like a violation than a storytelling. In No One Is Talking About This, it’s a family story but also a personal one, and we see the distress the protagonist experiences as she watches her family hurting, and she herself hurts. She doesn’t attempt to tell the stories of others in her family, except indirectly as a witness, allowing them to maintain their privacy. 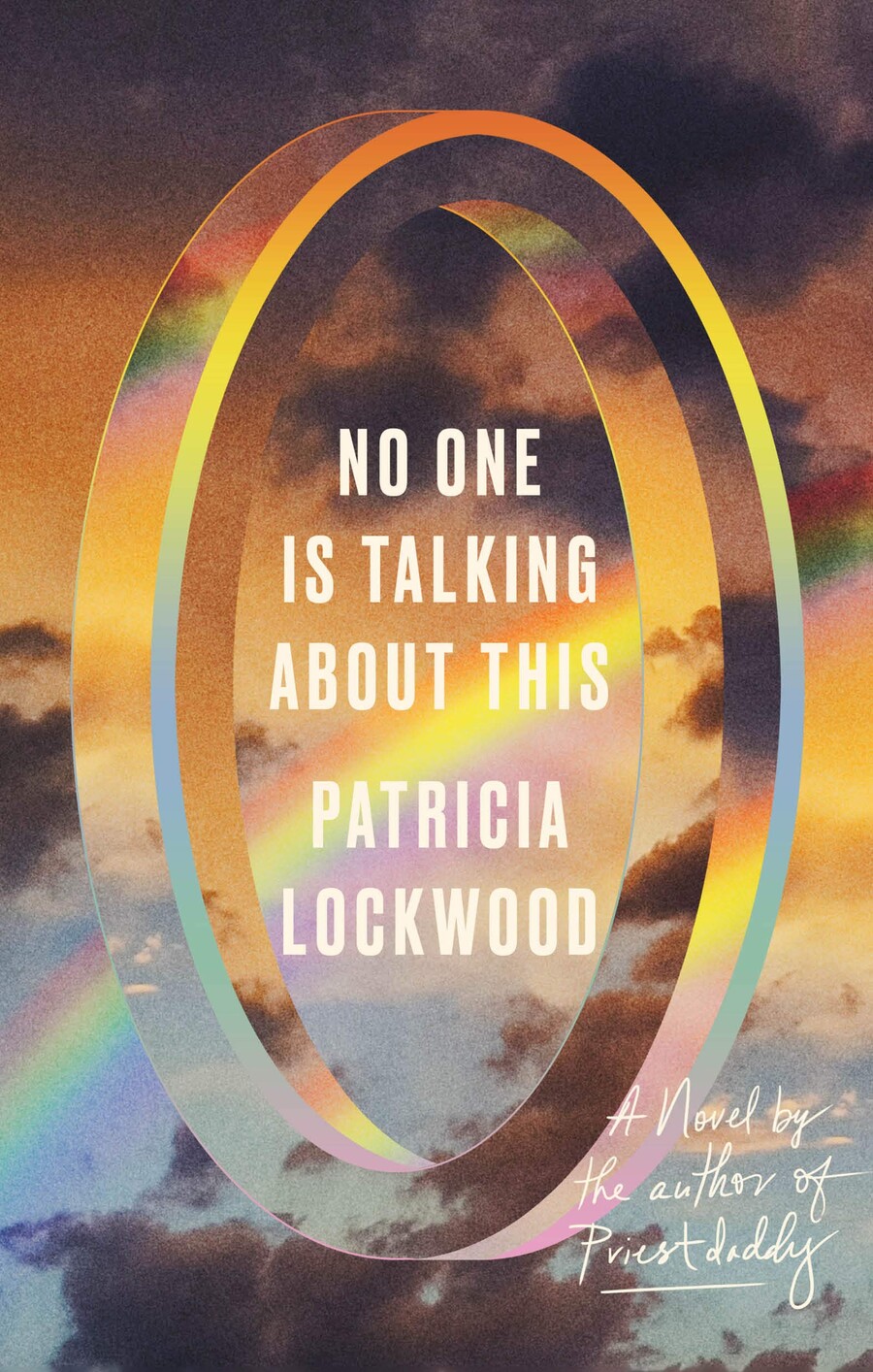 No One Is Talking About This by Patricia Lockwood (Photo credit: Riverhead Books)

The internet begins to fall away as the baby is born and the protagonist falls in love with her, giving up much of her life to spend a precious six months with her before she dies of complications caused by her genetic disability. The outside world feels distant and muffled as the main character’s interiority turns from firing off bon mots on the internet to the baby. “We don’t know how long she has — I can give them to her, I can give her my minutes…. What was I doing with them before?” When the baby takes a turn for the worse, the story enters the grim, sometimes comical parade familiar to anyone who has experienced a death, skittering from buying suits at Men’s Wearhouse to her sister appearing in ferocious pink at the memorial, yelling “WE GOTTA LOOK GOOD FOR OUR BABY.” With the winding down of the baby’s last days comes a sense of being dragged back into the undertow of the internet, as “the world called her back” and she wades through both her grief and her public.

The book ends with a simple scene: the protagonist dancing as someone steals her phone, leaving her “lighter.” No One Is Talking About This is an indictment of the internet, a monster that has us all so deep in its grip that we no longer know how to be human. When the death of the baby rocks the protagonist, she starts to feel distanced and abstracted from The Portal, vowing to only talk about serious things even as she falls into discussing the weather and geese in costumes. It implies that the internet is enough until something crushingly real happens, at which point it feels hollow and meaningless. The narrative goes from intangible shitposting to the visceral: the thump of ballerinas’ feet on the boards; the feel of a baby in your arms; cutting and saving grass from the baby’s grave. But No One Is Talking About This is also more complex than this: The Portal is waiting, eternal beyond the protagonist’s experience of grief. Even as she navigates the baby’s last days, she’s reading Marlon Brando’s Wikipedia article to her, or exchanging memes with her brother. As she takes refuge in being physically present with her family, the flickering presence of the digital is patient, ready to welcome her with open arms when she needs it again. This isn’t a choice between shitposting and changing diapers: It’s a reflection of our ebbing and flowing need for connection, and the evolution of our relationship to the world. 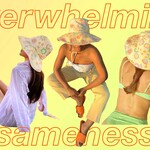 by Rachel Charlene Lewis
In quarantine, influencer marketing is being tossed into harsher light.