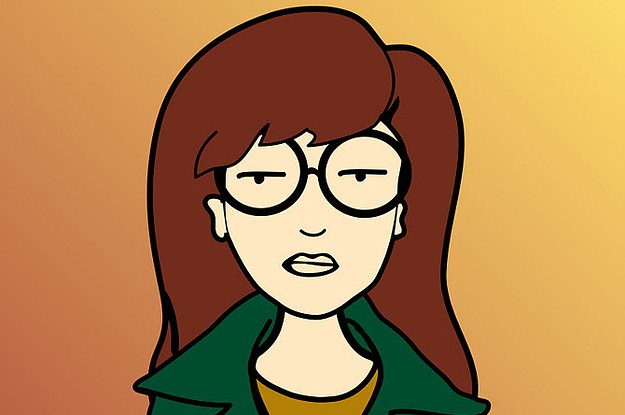 Daria first aired March 3, 1997 on MTV, a spinoff of Beavis and Butt-Head where the character first appeared after a request for some shred of female representation on the notoriously sexist show. MTV was having a hard time appealing to a female audience and “getting a lot of flak” for their gender representation in general, and so: Daria was born. Daria came onscreen in the very early years of the adult animated series. While the network originally conceived of the show for an older audience, it wound up catching on with a younger demographic that rallied around the depressive teen lead. What may have been a monetary afterthought to executives at the time turned into the longest running animated show in MTV’s history. Twenty years later, I sat down to watch the pilot (thank you MTV) to see if it still held up.

Less than 3-minutes into the episode a school counselor calls our protagonist “Dara” ignoring Daria’s correction. Daria retaliates by answering the counselor’s questions in the most frustrating way possible. I chuckle. No, this show hasn’t gone stale at all.

The pilot episode sets up the premise of the show: Daria Morgendorffer, her impossibly likeable and bubbly sister Quinn, their workaholic mom Helen, and skittish dad Jake all move to the fictional town of Lawndale, where the sisters attend their first day at Lawndale High. We don’t get to see Daria interact much with the student body in this first episode because she fails the entrance psychological evaluation with the school counselor, landing her (and us) in an extracurricular course about self-esteem for the remainder of the episode.

Starting the pilot off with a psych evaluation could quickly have turned bleak, but one of the most radical things about Daria was that the self-proclaimed “misery chick” was also allowed to have fun. The show hints at something deeper when Daria remarks “the last time I took this test,” implying that psych evaluations are not new to her, but still we see her mock the test, and the counselor administering it, in the same sentence. She smiles even, at the counselor’s frustration. Maybe Daria was depressed, but that didn’t preclude her from being a whole person throughout the run of the series.

In fact, based on the pilot you’d peg Daria as, well… kind of mean. It’s a harmless kind of mean, but it’s there. Halfway through the episode, as Daria’s parents express concern over her alleged poor self-esteem, she uses it to get the family to go to a cringe-worthy sing-along dinner. She deploys her deadpan sarcasm to confuse her father more than once throughout the episode. At the end of the pilot, she uses what would be a mortifying public speech to the whole school as an opportunity to embarrass her sister—by complimenting her and letting the rest of the students know that they are, in fact, related.

But where the show easily could have stepped into a didactic lesson on using sarcasm as deflection, it makes room for sarcasm to be genuinely funny and cathartic. Daria works against the idea of women as caregivers, or as primarily responsible for tending to others emotions and swaps it out with juvenile humor. She doesn’t have to bear the burden of impending womanhood or of likeability the way the high stakes drama of shows like Dawson’s Creek depicted. And that may just be the most revolutionary thing about Daria: she gets to wear the snarky, tough, at-your-expense humor usually reserved for men. That is, she gets to be rude and endearing.

Watching the show as an adult, I know now that Daria was, at least in part, written by and modeled after a man, Glenn Eichler. But for a show that started as a spinoff of Beavis and Butt-Head men remain secondary characters throughout, supporting roles that allow the women and girls on the show to exercise their autonomy. More often than not, they are the punchlines to the jokes. Never do you see Daria, or Jane or Quinn for that matter, go out of their way to be nice to them. In the same opening scene where Daria and Quinn are being evaluated, Quinn launches into a made-up story where she is telling a boy to step up his dating game or she’ll trade him in for someone else. It is the only show I can remember where a girl, any girl, animated or otherwise, does not owe a boy gratitude for a compliment. The characters “goodness” is not related to their sweetness or kindness or vulnerability. The girls in Daria can laugh at boys and not have it be to their detriment. They can poke fun at the father-figures or reject (and even juggle) potential suitors, without ever having to make up for it later. This feels especially radical in light of MTV’s move to monetize off of ‘a girl show.’ Despite having appeared in Beavis and Butt-Head first, Daria owes them nothing and shows no deference.

Sadly, part of the fierce nostalgia around Daria is that we still don’t see very many characters like her. MTV stopped producing animated series in exchange for the reality TV streak of the early 2000’s, ushering in the era of The O.C. and One Tree Hill where even the awkward “teenagers” were gorgeous and the dynamics between them took on longer and more dramatic story arcs. The “misery chick” in these shows were always just that: miserable and broken without ever really knowing that they were, always helpless and in need of saving. You could be self-deprecating, but not mean, not sarcastic, unless you were the villain. That freedom, apparently, is only possible in animated form. I’d argue Bob’s Burgers’ Louise could be this generation’s Daria, but she is once again two-dimensional. The closest glimpse of Daria in recent TV memory is Aubrey Plaza’s character in Parks and Recreation, the three-dimensional human April Ludgate. The resemblance was close enough to warrant a spoof movie trailer starring Plaza as Daria in a full-length film, but it was just a teaser never meant to actually go into production. 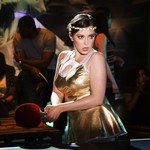