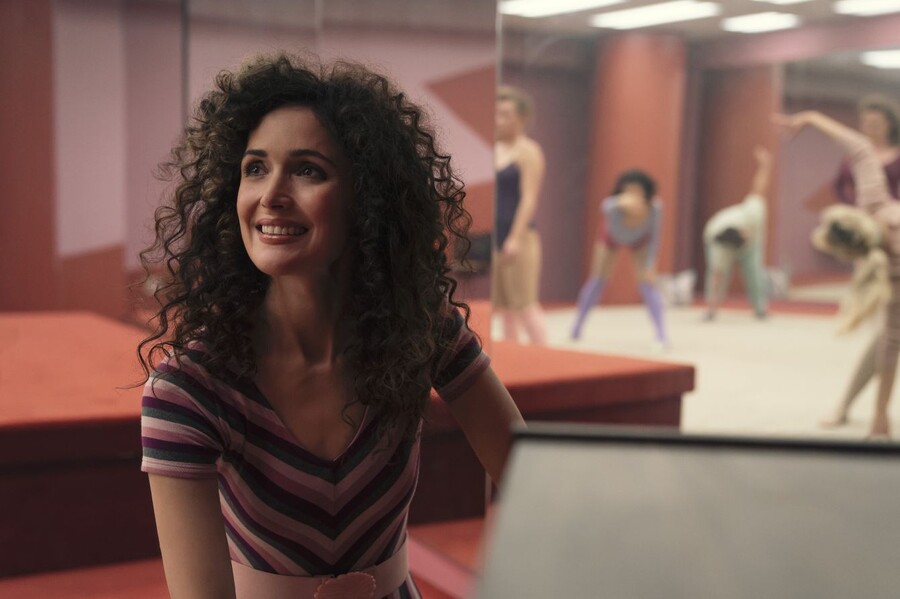 When I pressed play on the first episode of Apple TV+’s Physical, I had faint hopes that the 1980s dramedy would fill the GLOW-shaped hole in my heart. The 10-episode series is billed as a show about stifled yet enterprising homemaker Sheila Rubin (Rose Bryne) discovering aerobics and seizing control of her life. In trailers for the show, era-appropriate tunes like The Buggles’ “Video Killed The Radio Star” play as Sheila bops around in high-cut leotards, knocks her husband, Danny (Rory Scovel) down a few pegs, and appears to build friendships with other women. But these uplifting previews are deceptive: Within the first 10 minutes, we discover that Physical is more about a woman’s self-loathing and disordered eating than about aerobic exercise. With stellar performances and a vicious script, the show doesn’t pull any punches, which is both a strength and a weakness. Instead, Physical depicts an unfulfilled housewife’s inner demons with brutal clarity, making for a compelling but difficult watch.

We’re introduced to Sheila through a flash-forward set in 1986. The camera follows her from a dressing room to a soundstage while Heart’s “Straight On” blares. She struts to her mark in a sparkling fuchsia leotard, in full control, ready to record a workout routine. Based on Apple TV+’s marketing, this is the version of the protagonist we expect to meet. But then the show cuts to 1981, and suddenly, the fun is over. Sheila stares into a mirror, and the audience hears her thoughts via voiceover: “Ugh. Well, look at you.” In the show’s present, Sheila is trapped in a marriage to sleazebag Danny, understimulated by her mundane San Diego life, and struggling with severe bulimia. When her husband loses his job as a professor—“Hope you like sucking unemployed dick,” Sheila’s inner monologue mocks—he runs for office, banking on his ability to fail up. Simultaneously, Sheila begins taking an aerobics class, which sparks a business idea for at-home workout videos.

On paper, the series is an underdog story about an underestimated woman who starts an aerobics empire à la Jane Fonda, and based on the first scene in the pilot, we know Sheila’s efforts eventually pay off. But this season, all viewers see is the struggle, and Physical comes off as bleak and uneven rather than inspiring. One has to wonder if this bait and switch is intentional. In its trailers, Physical is packaged as glittery and upbeat, but the show itself is dark. Similarly, Sheila has two selves: the beautiful, composed wife and mother she portrays to the world, and the sick, unhappy woman who suffers alone. The duality doesn’t end there. Physical plays with the concepts of past and present, success and failure, and perception and reality—and sometimes, deliberately or not, it works well.

Speaking to the New York Times, series creator Annie Weisman sheds light on the personal experiences that led her to craft a show exploring these binaries: “I came to a point in my life where I realized I hadn’t really written about my own shameful secrets,” she said. “The most shameful one was this decades-long eating disorder. I hadn’t really seen it expressed in the way that I experienced it—as a secretive, dangerous, difficult illness.” The depictions of bulimia in Physical are indeed visceral and unpleasant. When Sheila feels out of control, she orders three meals from the local fast-food joint, checks into a seedy motel room, and, in a ritualistic fashion, strips naked, eats, and throws up. After each binge and purge, she tells herself “this is the last time.” When she isn’t performing these expensive compulsions, her cruel inner monologue holds her captive. Byrne’s biting voiceovers tell Sheila she’s fat, stupid, worthless, and unlovable; at times, the dialogue serves to elucidate the character’s true feelings about other people, particularly her frumpy-but-kind friend Greta (Deirdre Friel). She says one thing to a person’s face, while eviscerating them in her mind. No one, not even the audience, is free from Sheila’s disordered thoughts.

No one, not even the audience, is free from Sheila’s disordered thoughts.

The ruthlessness is the point of these onslaughts, but they sap the humor out of any scene the showrunners intend to be funny. Physical’s classification as a comedy is puzzling, and in fact, there isn’t much joy in the show at all. Most of the other characters are either unlikeable—Danny’s slacker campaign manager, Jerry (Geoffrey Arend); Sheila’s holier-than-thou former college classmate Tanya (Mary Holland)—or underdeveloped: aerobics instructor Bunny (Della Saba). Physical spends way too much time on Danny’s bid for office and multiple head-scratching scenes with John Breem (Boardwalk Empire’s fantastic Paul Sparks), a conservative Christian mall mogul whose arc, while intriguing, seems to occur in another show entirely. Slow revelations about characters’ backgrounds and motivations only infuse the series with more tragedy. Everyone is miserable. Even the lighting has a dingy cast to it, making the actors look sickly.

But Physical teases a brighter future to come, which may compel viewers to continue watching. The show also benefits from characters like Greta, as well as Bunny’s surfer boyfriend, Tyler (Lou Taylor Pucci)—the only true comic relief—who are easy to like and root for. The cast’s performances are outstanding, and Byrne is particularly impressive as Sheila, who feels like a real person in her complicated messiness. I found myself in her corner, too, even though she’s nasty to everyone but Danny, who actually deserves her wrath. And then there are moments of surprising sweetness when Sheila says something kind and her inner voice doesn’t contradict her. Although few and far between, these moments of genuine compassion in an uncompassionate show pull viewers back in. Physical’s showrunners use the aerobics dramedy as a Trojan horse for a serious depiction of disordered eating. It’s often painful to sit through, and viewers expecting fitness-routine–packed episodes about an enterprising star in the making may feel bamboozled. But there’s a light at the end of the tunnel for Sheila; the question is whether audiences will stick around long enough to see her get there.

Read this Next: Chef’s Kiss 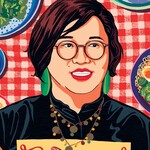 by Bani Amor
Her journey is less about accolades and more about ensuring she isn’t “the only one” in the notoriously exclusive food and restaurant space.