Policing, But Make It Girlboss 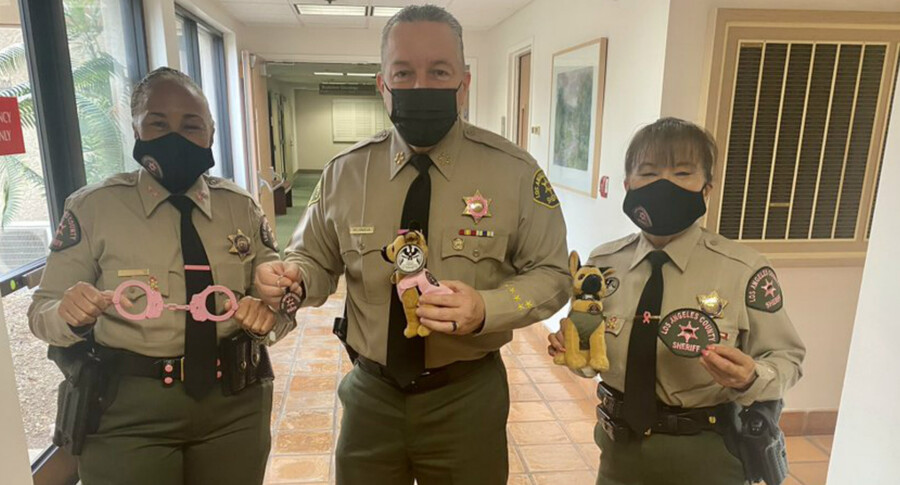 “Pink badges & pink handcuffs, all meant to grab your attention…” is how L.A. County Sheriff Alex Villanueva began his disorienting April 14 tweet, sent in the middle of the trial against former Minneapolis officer Derek Chauvin. The tweet features a photo of Villanueva with two other cops in uniform—women of color—all holding pink handcuffs and badges in an effort “to raise awareness and pray for a cure to end breast cancer.” In the thread, Villanueva also mentions that the LAPD donated $10,000 to breast cancer research as part of the Pink Patch Project, founded in 2019 to sell pink patches to police officers across the country. Villanueva and the rest of the participating officers are clearly expecting to be heralded as women’s health heroes, but it’s impossible to see this as anything but an eerie, pink-tinged distraction. In fact, in less than 280 characters, Villanueva reminds us of the longstanding tradition of cloaking police violence beneath the guise of women’s rights. In this case, they’re literally pinkwashing policing.

Aside from this initiative reading like a stale satire about liberals versus conservatives (policing, but make it girlboss), this initiative provides a moment to reflect on the complicated relationship between women’s rights and policing. To begin, a common gut reaction to abolition is “But who will protect women from rapists?” This question, which requires a nuanced dialogue rather than a quickfire response, has led to the idea of women’s safety and well-being being used as a rhetorical weapon to fight against police abolition. In reality, cops rarely help victims of sexual violence—take the thousands of rape kits sitting untouched in police precincts as one hefty example. Despite this evidence, the notion of protecting women from men’s abuse has been historically used by carceral feminists to argue for more state involvement and policing in a way that has disproportionately harmed Black and brown communities. But while the Pink Patch Project seems to position policing as compatible with, or even conducive to, women’s health, we must remember that the police state is actually highly detrimental to women’s—and all people’s—health. In fact, policing and the entire carceral system behind it is a major infringement upon reproductive justice.

If we want to protect women and their health, abolition is key. Understanding reproductive justice can also help us grasp the importance of abolition beyond political rhetoric and protest signage. While the white feminist framework of reproductive rights is typically limited to the right to not have children, SisterSong defines reproductive justice as “the human right to maintain personal bodily autonomy, have children, not have children, and parent in safe and sustainable communities.” This means reproductive freedom extends far beyond the womb and can be infringed upon long after birth. By creating a culture in which Black parents constantly fear they will lose a child to police brutality, the police are in direct violation of these central tenets of reproductive justice. When even children might lose their lives at the hands of the police, there’s no such thing as safe and sustainable communities and reproductive justice remains out of reach. Moreover, researchers have examined a weathering effect, whereby the accumulating stress of racial discrimination leads to higher rates of infant mortality and lower birth weights by race. In other words, the stress of the police state affects Black babies and their parents even before they’re born.

And of course the physical violence of policing, incarceration, and detention is also detrimental to reproductive health. In terms of breast cancer specifically, public-health experts have found that incarcerated women are at an increased risk for breast cancer, which a onetime $10,000 donation to research won’t undo. Additionally, violent arrests and inhumane treatment in detention centers often lead to health issues and miscarriages for pregnant people of color. Just last year in Kansas City, protesters demanded the resignation of the city’s police chief after the circulation of a video showing an officer kneeling on the back of a pregnant woman during arrest, and that was hardly an isolated incident. It’s hard to forget the graphic story of a California woman miscarrying early last year after an officer stomped on her visibly pregnant stomach, leaving a shoe mark. Most recently, a research study found a link between exposure to teargas during protests and long-lasting, painful disruptions to menstrual health.

For migrant women, conditions in ICE detention centers have been so poor, detention in the United States has been deemed dangerous for women’s health and rights. After the Trump administration ended pregnant women’s exemption from ICE detention, stillbirths and miscarriage rates skyrocketed and various women reported being refused medical care for their miscarriages while detained. Taken together, these stories of violence and negligence point to the carceral state’s utter disregard for women of color’s reproductive health, their bodies, and their families. There’s also a strong link between the police state and forced sterilizations. While many know of historical accounts of forced tubal ligations and hysterectomies before the American eugenics movement was finally deemed illegal, few realize that this practice never fully ended. In September 2020, for instance, allegations emerged that a doctor nicknamed “the uterus collector” was coercing detained women in an ICE facility in Georgia into having hysterectomies.

Tennessee had an official program of shortening people’s jail sentences if they agreed to sterilization procedures until a federal court order officially ended it in May 2019. And nearly 150 women in California prisons were coerced into sterilizations between 2006 and 2010 if they were considered likely to return to prison. These stories underscore the importance of the reproductive justice framework, as well as the near impossibility of true reproductive freedom in a carceral state. Policing and incarceration have even been deployed as tools of the state to limit access to and perpetuate a culture of fear and stigma around abortion. In some states, anti-choice policies have been used to criminalize women for having miscarriages or stillbirths or even for having abortions outside the medical system. This is the case in the 29 states with “feticide” laws that purport that fetuses should have legal personhood. While feticide laws were designed in the 1970s to protect pregnant women from abusive men, these laws have been disproportionately used to criminalize pregnant people when a fetus dies outside of abortion in a clinic. This trend reached a turning point in 2015 in Indiana when a woman was sentenced to 20 years in prison for having an at-home abortion with pills she illegally obtained.

Even in the case of stillbirth, women such as Keysheonna Reid in Arkansas and Melissa Ann Rowland in Utah have been charged with feticide. This continuing trend of criminalizing and investigating pregnant women after the death of a fetus eclipses the rights and autonomy of the pregnant person and could lead to people avoiding the medical system during a miscarriage altogether, as it becomes increasingly entwined with carceral logic. All in all, there are countless ways to improve the health and well-being of people with uteruses, but pinkwashing the carceral state isn’t one. We don’t need to replace police accessories with “girly,” limited-edition, pink handcuffs and pepper spray; we need less policing. Donations to breast cancer research will neither fix the needlessly bloated police budgets nor alleviate the toxic conditions in jails, prisons, and detention centers in the United States. Mass incarceration, policing, and detention will never be compatible with reproductive justice, as the tools of the carceral state have been used time and time again to limit bodily autonomy and reproductive freedom. While the answer to “But who will protect women?” is complex, the one thing we know for sure is it will never be the police.

Read this Next: There Will Be No Herd Immunity without Vaccine Equity 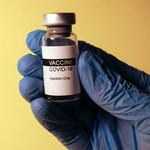 by s.e. smith
The stakes of the vaccine rollout have been huge for the disabled community.