On “GLOW,” Cocaine Is a Gendered Pleasure Habit | Bitch Media

In Pop Culture, Even Cocaine Is Gendered 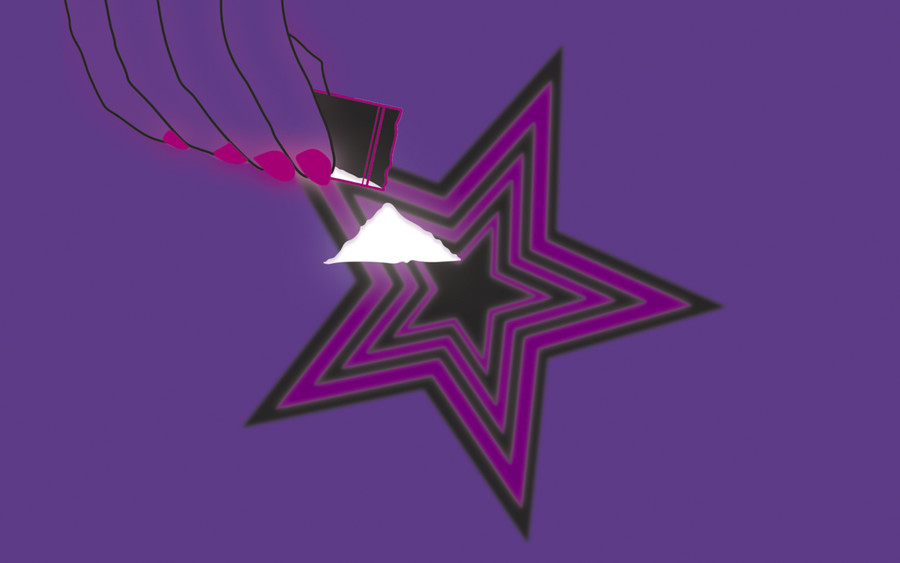 During the late 19th century, cocaine was as readily available in the United States as milk and eggs. It was available in Coca-Cola, Bordeaux wine, drug stores, and grocery stores, and doctors even prescribed a concentrated version—cocaine hydrochloride—as a topical painkiller. By 1903, however, fearmongering about “crazed cocaine addicts,” especially working-class Black men, led Congress to crack down on the distribution of the drug. There was also hysteria around women using cocaine; fear abounded that women who used the drug would fall into prostitution. So in 1914, Congress passed the Harrison Narcotics Tax Act to outlaw nonmedical use of cocaine and other drugs, such as marijuana, in the United States.

According to the Central Intelligence Agency, the United States is the world’s largest consumer of cocaine, and in Hollywood there’s still a gendered dichotomy where women are penalized for using cocaine. In crime-focused movies such as Scarface (1983), Blow (2001), and In Bruges (2008), piles of cocaine are used to symbolize extravagance, wealth, recklessness, and a sense of being untouchable. Of course, these drug dealers are almost always men while women, like the pregnant teenager in Maria Full of Grace (2004), are mostly utilized as drug mules. While Maria (Catalina Sandino Moreno) survives, she watches a fellow drug mule Lucy (Guilied Lopez) die after balloons full of cocaine rupture inside her body. In real life, women who run drugs also have a higher risk of being incarcerated.

On the other hand, women characters who use cocaine almost always pay an immediate price: Cocaine Fiends (1935, also known as The Pace That Kills) follows small-town girl Jane Bradford (Lois January) as she moves to the big city, ends up dating a drug dealer who offers her “headache powder,” and becomes a nightclub singer, a 1930s euphemism for sex worker. The film seeks to demonstrate how cocaine use can ruin certain women. More than 100 years later, white women characters, such as Debbie Eagan (Betty Gilpin) on GLOW, are still being penalized for using drugs. Using cocaine before a wrestling match makes Debbie more aggressive and less coordinated, leading her to accidentally break her fellow performer Ruth Wilder’s (Alison Brie) leg. Violently injuring another person becomes a moral consequence for Debbie with further consequences lingering at the end of the season.

In Pulp Fiction (1994), Mia Wallace (Uma Thurman) typically becomes more lively, animated, and fun after doing coke, but other characters whisper about what happens if you get too close to her—after all, she’s a mobster’s wife. Cocaine unveils Mia’s alter ego, and in many ways offers her a temporary escape. When she’s high, she laughs and dances like she has no care in the world. Yet in one of the most dramatic scenes of the movie, she overdoses after mistaking a baggie of heroin for cocaine. She survives, but it demonstrates how her desperation for the drug leads her to make impulsive decisions. Almost every depiction of onscreen cocaine use features white women while Black and Brown women, such as Tasha Jefferson (Danielle Brooks) on Orange Is the New Black, are almost always cast as drug smugglers. While white women snort cocaine and fall into ruin, poor Black and Brown women are not considered in need of help or as unwilling cogs in a patriarchal machine that punishes the poor, but rather an active part of the system that corrupts white women’s purity.

One portrayal that disrupts this gendered trend is Mindy St. Claire (Maribeth Monroe) in The Good Place. During one of her coke binges, she withdraws her life savings to start a global charity that becomes, after her death, the largest relief-aid organization in the world. Her cocaine addiction is something “bad” that led to something “good,” so her soul is put into a state of limbo (called “the medium place”). In this portrayal, cocaine is seen as a means to a very different—not self-serving—end. Unlike other women characters, she isn’t ruined by addiction.

It’s the depiction in GLOW that most resonates with my own experiences with cocaine: self-medicating to gain some fleeting sense of power over my life. It’s less about pleasure than the belief that with control comes relief, and with relief comes a chance for release. Perhaps that’s why cocaine use is allegedly rising in the United States: Americans, onscreen and in real life, are grasping for any sense of pleasure in a country that’s spiraling out of control.