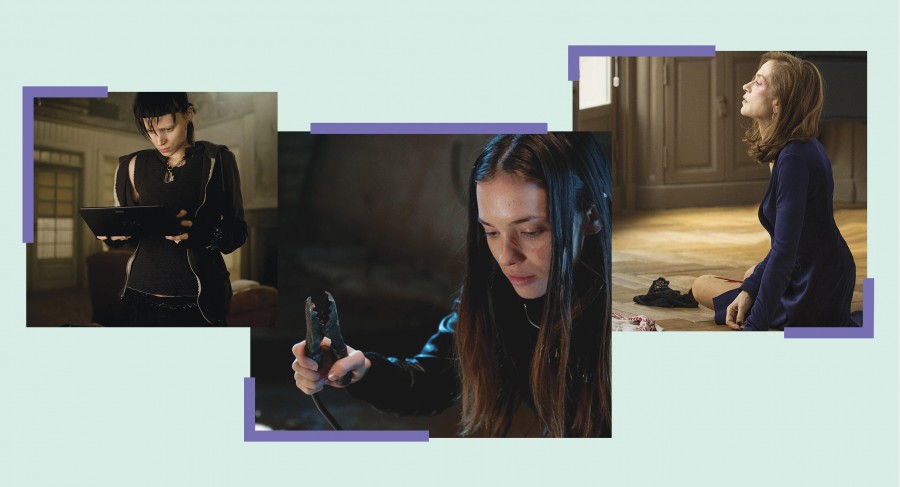 Stills from The Girl with the Dragon Tattoo, I Spit on Your Grave 2, Elle

In film, the rape-revenge genre has always been fraught. Often relegated to the annals of B-movies, righteous retaliation has been fodder for sadistic storytellers. Yet the pull of the genre is understandable: In a world where sexual violence is routine, vigilante justice is not only inevitable, but satisfying. The women at the center of their stories, once violated, lose their humanity, becoming villains who enact disproportionate violence on their assailants. “[These] films use women’s trauma to justify stereotypically male pleasures of hyperbolic violence,” Noah Berlatsky wrote in The Establishment. “Rape/revenge fits feminism into male genre narratives that Hollywood can embrace.”

While some movies that fall under the rape-revenge umbrella, such as Thelma and Louise and Mad Max: Fury Road, revel in the subversion of genre, most linger on the initial assault, dragging it out as a form of entertainment. I Spit on Your Grave 2 is a vile film that follows in the footsteps of its 2010 predecessor, itself a remake of the 1978 original. The protagonist is kidnapped, drugged, tortured, pissed on, and raped multiple times by multiple assailants. After she escapes, she’s tricked into returning to her captors where she is brutally beaten, electrocuted, and savagely raped again. When she is “used up,” her naked body is locked in a trunk and buried underground. Her assaults take up the first half of the 106-minute film. The camera lingers on her bruised and beaten body during the rapes as if to justify her rapists’ attraction to her. It is an unending visual parade of brutality wherein the protagonist is reduced to a plaything for barbaric men.

The women at the center of rape-revenge stories lose their humanity, becoming villains who enact disproportionate violence on their assailants.

But her “revenge” is also senseless. She shocks one assailant to death in retaliation for tasing her genitals, drowns another in a toilet bowl full of fecal matter in exchange for pissing on her, squeezes another attacker’s testicles, and slices open and deliberately infects the wounds of her final assailant. The acts are merciless—and just as vile as the initial assaults. I Spit on Your Grave 2 creates an unconscionable moral equivalency between the victim and her attackers and therein lies the problem: By equating the victim with her attackers, the film fails to comment on sexual violence in a meaningful way that justifies its gross depiction. Thankfully, other rape-revenge films show protagonists exacting retribution in ways that hew to justice.

In 2011’s The Girl with The Dragon Tattoo, protagonist Lisbeth Salander (Rooney Mara) is a ward of the state. When her new guardian forces her to perform oral sex and later rapes her, she hatches a plan to entrap him. Both of the assaults are upsetting. In the first, the camera frames the back of Lisbeth’s head as he pushes it down to his crotch. The second time, he handcuffs her to his bed and anally rapes her, leaving her bloodied and bruised. Part of the horror is the size difference: Lisbeth is short and very thin while her guardian is tall, strong, and rotund. Her revenge plot, however, reveals her cunning intelligence.

She hacks her guardian’s devices and creates her own miniature surveillance system to track his movements; she then uses a Taser to knock him out and handcuff him to his bed. She strips him naked, forces him to watch a video recording of her rape, rams a metal dildo into his anus, and tattoos “I AM A RAPIST PIG” across his belly. The scene is violent and bloody, which makes it easy to feel sympathy for her guardian. Yet there are no cruel shots of his nakedness or vulnerability. Most important, Lisbeth is not driven mad by men’s violence. She returns to her life and becomes integral in solving decades-old rape, torture, and murder cases in Sweden. While her inordinate emotional strength is empowering, a distinct divide between right and wrong isn’t always apparent.

The 2016 film Elle is more complicated and ambiguous. After experiencing an uptick in targeted harassment, protagonist Michèle (Isabelle Huppert) is raped by a masked assailant who breaks into her home. She chooses not to report her assault, but finds ways to reclaim her power and sense of safety. Michèle becomes sexually aggressive in her flirtation with her neighbor who is revealed to be her attacker. The rape scenes are neither gratuitous nor lingered upon, and the lines of consent are intentionally blurred as Michèle continues to let her neighbor into her home despite knowing the danger of doing so. Toward the end of the film, she lures him into her house, where her son kills him. The audience is left to speculate as to whether her luring was deliberate.

Rape-revenge films must always center the victim rather than the physicality of her pain. There are meaningful stories to be told about women seeking to punish the men who harm them, but they cannot also be a place where women’s bodies are reduced to nothing but faceless receptacles of male savagery.

This One’s for Tara