Poetic Resistance Against Everyday Transphobia, Racism, AbleismA Review of “When the Chant Comes”

On a balmy Friday night, folks from far and wide gather at Women & Children First, Chicago’s only feminist bookstore. Their purpose is to hear the poetry of local, predominately QTPOC artists whose performances are the prelude to the main event— a book release party. After an hour, against a backdrop of children’s books stacked a mile high and illuminated by their glossy, chromatic covers, Kay Ulanday Barrett performs poems from his first published collection, When the Chant Comes. A seasoned performer, Barrett takes the audience on a highly emotional journey, reciting five poems from his recently released collection and one new poem that is not yet published. By the end of the performance, the audience has laughed, cried, and mourned right alongside Barrett. Those who didn’t have a copy of When the Chant Comes prior to the event make it a point to purchase one and get it signed in the time remaining before the bookstore shuts down for the night.

Within its pages, When the Chant Comes delivers profound, often gut-wrenching meditations that explore what it means for Barrett to navigate life in the United States as a disabled, pilipinx-amerikan, transgender queer. The opening poem, “if your family is forced here,” sets much of the tone for the kind of poems readers should expect to find throughout the rest of the collection. “if your family is forced here” traces the pain and heartbreak of migration. Its lines tell tales of longing for home, with all its familiarity and comforts, while trying to contend with the growing distance between the familiar and a new country that is far from welcoming.

Such sentiments are not only found in Barrett’s poems on migration, but are also intertwined with those in his poems on trans identity, family, friendship, disability, and struggles with everyday ableism. The poem “YOU are SO Brave,” the hallmark performance of the night, seemingly combines all of these elements as Barrett chronicles real-life interactions, which are bound together by people’s striking inability to hold all of the complexities of his identities at the same time. Throughout the two and a half pages of the poem, Barrett interacts with everyone from the “Does it hurt still? When will you get better?” person who’s a close, kindred cousin to the “Why aren’t you better?” person.

He meets the “well-meaning” yet seemingly ableist stranger:

“Let me take a picture of you holding your back - show the cane! SHOWWW THE CAAANE!”

He also bumps into my personal favorite of the casually ableist bunch, the hopelessly holistic, millennial, woo-woo wonderkin who truly think a good wave of a crystal wand coupled with a hearty “OM!” will cure all disabilities:

“If you take these herbs enough, you can be like you were - better, normal.”

“If you just pray hard enough you will heal. (Have you tried acupuncture? water therapy? meditation?)

“YOU are SO Brave” also chronicles Barrett’s struggles with medical professionals and social service agencies, whose violent institutionalized ableism and transphobia are a powerful reminder that dehumanization is too often part and parcel to receiving care and benefits for sick and disabled QTPOCs. Equally damning are the movement organizers and spaces that treat accessibility information like an afterthought and the “queer progressive” organizations that still don’t grasp that working-poor QTPOC artists can’t write checks from the Bank of Exposure to utility companies or landlords in exchange for performance and workshops and expect them to cash.

Beneath the tides of Barrett’s writing is a strong undercurrent of grief, a grief that ebbs and flows from one piece to the next. Through it, he navigates the multitude of ways loss manifests itself in one’s life. Barrett conjures up the difficult last moments of his time with his mother before she heads back to the Philippines to die. He remembers the day after his lola passed away. He laments for all that could have been in a letter to his unborn child. In his stanzas, Barrett makes space for those he’s lost along the way, while coming into his own as a disabled person and transgender queer who eventually transitions. The work of mourning in When the Chant Comes contains multitudes. It’s as multivocal and fluid as the five thematic sections of the book. The work of mourning is as much about justice, love, and sickness as it is about death and soul.

But even though there is darkness and grief in When the Chant Comes, there is also humor, the kind of humor QTPOCs routinely use to cope during difficult times and connect with each other. “tools to survive mercury in retrograde” is imbued with that sort of dark, tender humor used by some to endure the notorious difficulties of retrograde season. Mercury Rx is the most dreaded time of the celestial cycle. Anything that can go wrong will. Common symptoms of Mercury Rx include sudden onset of heavy emotions and complete lapses in communication (missing text messages anyone?). Barrett reminds readers that while Mercury Rx is actually the worst, there are ways to survive. All we need to do is flip on TLC, not eat all the pastries in the fridge, have plenty of salty snacks on deck, and love fiercely, but also let go as needed.

When I first picked up When the Chant Comes last November, I sat in a nearby coffee shop down the street from Women & Children First. It didn’t take me long to devour this short yet powerful collection of soul-stirring poems. Seeing a selection of this work come to life during Barrett’s riveting performance only reaffirmed the potency of these poems. In an era where immigrants, sick and disabled folks, and QTPOCs are under heightened attack, When the Chant Comes is the balm for those wandering at the crossroads of those identities—not because it promises solutions, but because of the unique way it offers its readers relief. 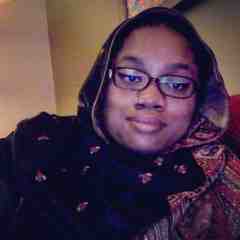 zaynab shahar is a queer black sufi femme. An aspiring the*logian, cultural worker, philosopher, writer, and artist; zaynab currently divides her time between pursuing a doctorate in Religion at Chicago Theological Seminary and organizing for queer/faith projects such as Third Coast Queer Muslims and Masjid al-Rabia.