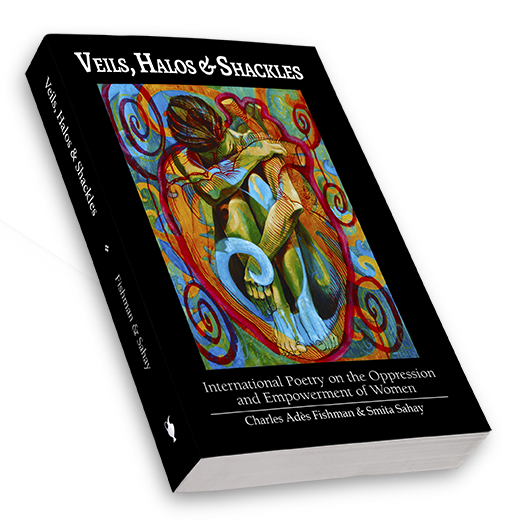 One night in December 2012, a young physiotherapy student Jyoti Singh Pandey and a friend went to watch a movie in Delhi, India. After the movie, they caught a minibus home. But on the bus, the friends were attacked and beaten. Six men raped Pandey, and she later died from her injuries. The attack shook the nation and ignited much-needed public discussions about the epidemic rates of sexual assault.

Around the time of the attack, Mumbai-based poet Smita Sahay was corresponding with American poet Charles Adès Fishman about his latest book of poems. The conversation turned to a discussion of the gruesome and senseless gang rape. The pair decided to create a tribute to Jyoti that would also serve as a protest against the unjust brutality of crimes against women. Four years later, the idea has become the collection Veils, Halos & Shackles: International Poetry on the Oppression and Empowerment of Women (Kasva Press).

“I believed that a major anthology of women’s voices would be more lasting and have a deeper impact than individual articles and events,” says Fishman.

With more than 250 poems, the anthology spans around 500 pages, and contributors hail from nations and cultures across the world, all speaking the same language of oppression and subjugation, of the senseless violence power can inflict. Most of the poems revolve around crimes, whether perpetrated by sugar-coated familiar faces or demonic strange ones. A note from each poet follows their poem. Sahay says the decision to include those notes was crucial. “A personal story lifts a poem off the page, offering solidarity and empathy to the reader. For readers new to poetry, and for teachers teaching women’s studies and gender studies courses, these personal stories offer a powerful bridge,” says Sahay.

The incident that was the seed of the anthology finds space here. In his poem “That Stone,” Indian poet K. Satchidanandan alludes to the biblical episode of Mary Magdalene with the line, “Let the man who has not sinned pelt the first stone!” In the note that appears after the poem, the poet explains, “There were many demonstrations of protest, and many people in the city, including men, took part in these. Many men also blamed women in general for such situations—for dressing seductively, traveling alone at night, and so on. I felt that this rape-murder was a call for introspection for all men who misbehave, or have at any time misbehaved with women.”

Sahay’s poem “For Nameless, Faceless Women” addresses the rape in the form of a letter to the society. In the poem, she calls for change in the pattern of the stories told to children: “Don’t you see, you have to change your stories? Don’t you see, you have to change the way you tell your stories.” In her note, she says that until we decide to bring up our boys and girls equally, oppression will continue.

In order to protect the identity of the victim in the weeks after the attack, media outlets initially referred to her by many names, including India’s Daughter. The disquiet about this facelessness, this desire to keep the identity of the victim secret—as if the incantation of her name was itself sacrilege, when the society had already failed her—comes across in the poem “A Few Threads” by Baisali Chatterjee Dutt. “Maa, you cover me with sheets now, and there is newsprint where my guts used to be, I’ve lost the name you gave me, but I have a few fancier ones instead.”

Most of the poems deal with responses to terrible violence. But there are also poems of strength and resilience. In some poems, women swallow the power of goddesses, demand to be seen, and are preserved.

Some poems explore subtle, sinister violence that occurs stealthily inside homes and other places that are supposed to be safe. We see how the simple act of making a sandwich can lead to broken bones in “The Importance of Mustard” by Cheryl R. Cowtan. The poem starts pleasantly enough with a mother making a sandwich, her children playing in the garden, but even then phrases leap to the eye—sizzling bacon, cracked-wheat bread, hot grease, melting into contact—before it winds down chillingly: “I’m holding my finger, it just started to ache, An ache from a break, from the last time I didn’t put mustard on his sandwich.”

Even when there is no visible violence, oppression can raise its narcissistic head to preen, as it did to Mary Dudley in a photograph that inspired her to write a poem titled “Can You Express Yourself by Becoming Invisible.” This poem begins by invoking the reader to look for the woman sitting in the shadow of the man: “Look how she has made herself invisible; how he takes up, so much space, beside her, on their small settee.”

You cannot read this anthology on a holiday or on a relaxed Sunday because each line, each stanza, each poem gets trapped under your skin. The words on the page lodge inside your mind, raising relentless questions of why and how such violence can even occur. But this is an anthology that should be read and reread to spread the word that such violence does not and should not have a place in this world. As Sahay puts it, “Every candle throws light on unacceptable happenings over the world; every protester’s voice compels others to break their silence. We join in. Every poet holds a candle; every poem speaks up against injustice. The book is a protest march—in libraries, classrooms, book clubs, readings, and on the streets.”