A Woman’s WeaponPop Culture Takes On the Poison Trope 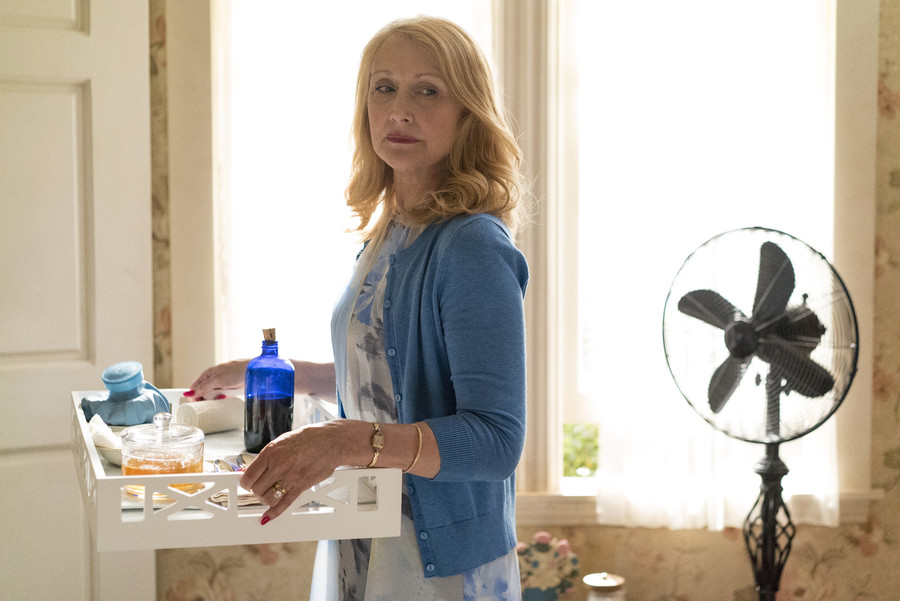 It’s a blistering Missouri morning, and Adora (Patricia Clarkson) is standing at the stove, boiling a concoction from elixirs in glass bottles while two of her daughters lie in bed, pearly with sickness. When her husband, Alan (Henry Czerny), tells her to leave the girls alone and let nature do its healing work, Adora replies: “I’m just helping nature along.” She omits that she’s “helping” nature with rat poison and antifreeze, the same ingredients she used to kill her daughter Marian (Lulu Wilson) many years before. This image of a woman calmly mixing murderous substances to feed her loved ones comes from HBO’s Sharp Objects, a miniseries adapted from Gillian Flynn’s 2006 novel. It also reinforces an old stereotype: Poison is a woman’s weapon.

Sherlock Holmes, Batman, and the British Parliament are among the many cultural and social authorities who’ve cast women as the world’s chief poisoners. In a 1945 film, Sherlock says it outright. One of Batman’s most famous nemeses is Poison Ivy, who uses toxins in her bloodstream to wound people and protect the environment from human destruction. The 1851 Arsenic Act required pharmacists in the United Kingdom to record all arsenic sales in a written ledger because there were too many “accidental” deaths when servant girls brought the goods home to their mistresses. A Game of Thrones, another book that launched a hit HBO series, best summarizes the stereotype in an early chapter. Speculating on the cause of death for the nobleman Jon Arryn, royal scholar Grand Maester Pycelle wonders if poison was the culprit and describes it as the weapon of “women, cravens … and eunuchs.”

Lumping us in with cravens and oft-maligned, discriminated-against eunuchs gives women a clear diagnosis: We’re cowardly and impotent, hence our reliance on a sneaky weapon. Poison, in this view, is the symptom of a decidedly feminine evil. Sharp Objects and Paul Thomas Anderson’s Oscar-winning film Phantom Thread treat poison as a cunning woman’s tool—but the act of poisoning stems from uniquely female burdens. Sharp Objects follows Adora’s eldest daughter, Camille (Amy Adams), as she returns to Wind Gap, Missouri, to report on the murders of two young girls. What she discovers is that her beloved younger sister Marian didn’t die from a mysterious illness, but because their mother gradually poisoned her.

Adora has Induced Illness by Carers, previously known as Munchausen Syndrome by Proxy: She needs her children to be sick so that they depend on her, and so she can garner sympathy from onlookers. In Phantom Thread, poisonous mushrooms are the star: After London fashion designer Reynolds Woodcock (Daniel Day-Lewis) weds his muse, Alma (Vicky Krieps), she checks his outrageous ego by feeding him toxic fungi until he’s too sick to get out of bed.

The poisonous-women trope has mostly been debunked. As the Washington Post reported in 2015, federal homicide data from 1999 to 2012 shows that men committed so many more murders in that period that, in raw numbers, they used every weapon surveyed, including poisons, more than women. (Separate data from 1980 to 2008 affirmed their findings on the poison front.) But the data also partly supports the trope: When women kill, we’re seven times more likely to choose poison than men, who overwhelmingly favor guns. Onscreen, women’s relative preference for this weapon remains associated with domestic practicalities: Poison fits neatly into the household tasks that have long been women’s responsibility.

No one rushed to question the servant girls buying their mistresses cosmetics laced with mercury, no one looked askance at a Southern belle like Adora fussing with a mysterious assemblage of glass bottles, and no one views Alma, cooking mushroom-y dinner for her husband, as at all suspicious. The servant appears as a good helper, Adora a doting mother, and Alma a loving wife. Their duality of playing “good girls” while administering poison shows how domesticity drives their actions beyond giving cover for an easily acquired and easily concealed weapon. Domestic life runs on caretaking, which is typically the work of women. We are expected to clean and organize our family’s homes, feed our husbands and children, and nourish those around us at the expense of our own needs.

When those burdens grow too heavy, they can give us reason to poison. Both Sharp Objects and Phantom Thread recognize this, and consider something the poison trope typically neglects: women’s motives. After planting a sick Camille in the bath and pulling her hair back as she vomits, Adora says: “I’ve waited for this for so long. For you to need me.” Adora then reveals—or claims, depending how you take it—that when she was 7, her mother woke her up in the middle of the night, drove her into the woods, and left. “We all have bad childhoods,” Adora concludes. “At some point you have to forget it, move on. Anything else is just selfish.” She then pulls on Camille’s hair as she readies her daughter to drink more poison. 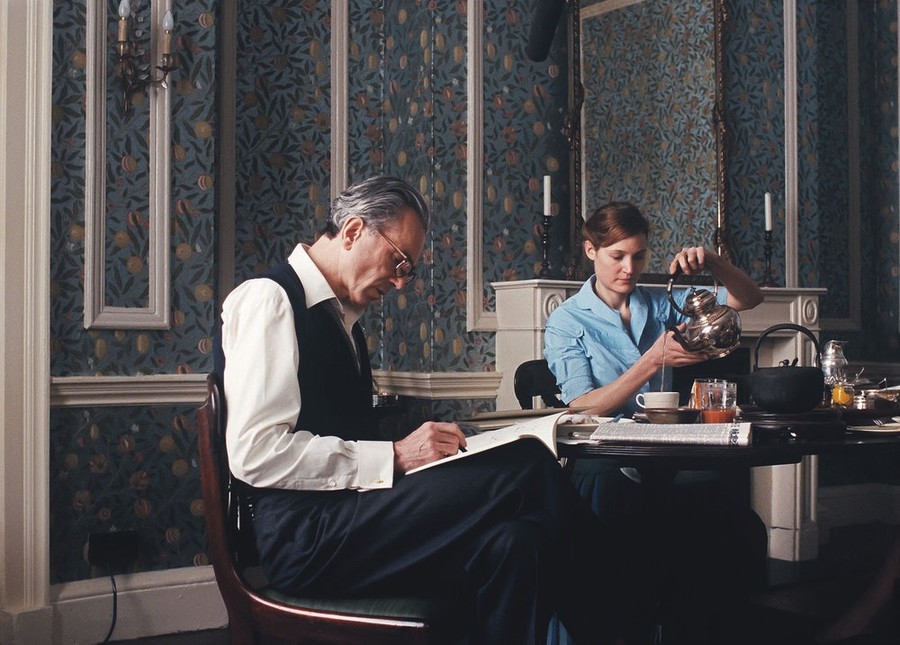 The accusation of selfishness is a stunning, character-defining moment of blithe hypocrisy from a woman who, in her telling, was abused as a child and now nurses a pathological need for validation. Poison gives Adora a solution, a balm, for this need. It lets her secretly damage her children while she glows in the role of selfless mother. She protects her reputation in Wind Gap with this fiction, which draws sympathy and reverence from other residents. And reputation is no cheap currency in a claustrophobic small town where, as murder suspect John Keene (Taylor John Smith) puts it, girls seemingly get killed for having minds of their own.

In London, Alma constantly gets scolded for aspiring to be independent. Reynolds is domineering and obsessive about designing couture, and in marrying him, Alma gains access to the luxuriant fashion world at the cost of having to follow his rigid principles and demands. When Alma cries in anger, Reynolds snaps at her to “stop blubbering.” When she speaks up about her taste in clothes, he chides and shoots her down. So Alma turns to a last resort: recipes inspired by a book chapter on “edible and poisonous mushrooms.” The dishes land Reynolds in bed, “flat on [his] back,” as Alma says: “helpless, tender, with only me to help … you’re not going to die. You might wish you’re going to die, but you’re not going to.” By bending Reynolds to her will, she wins her independence, balances their power dynamic, and, in a twisted way, saves their marriage.

It isn’t accidental that both Alma and Adora use poison to secure control in worlds defined by traditional caretaking roles. Alma fiercely clings to life as a consummate wife, devoted to her husband’s identity and creative endeavors. But she wants to call the shots every now and then, and her trusty mushrooms allow for that. Adora, on the other hand, stays atop Wind Gap’s social hierarchy by embodying the feminine paragon: an impeccable hostess, a devoted mother to frail daughters, a savior who glides through town in flowing dresses, dripping with concern for other people’s children. That both women end up relying on poison to fulfill their emotional needs hints at a fatal flaw in their acceptance of the burdens they’re expected to carry.

In her analysis of how Game of Thrones depicts the poison trope, Megan Garber calls poison the “tool” of the vigilante—something that can cut through normal channels of power, making it possible for anyone to murder a king. In their own gothic tales, Alma and Adora are vigilantes, using the trappings of femininity to subvert their expected roles. Evil might happen to lurk in both these women’s hearts and minds. But the social code around them—the unspoken rule that self-sacrifice is the key to being a wife, mother, and ultimately, a woman—certainly helps nature along.

Elena Gooray is a writer and editor, mostly covering health and culture.