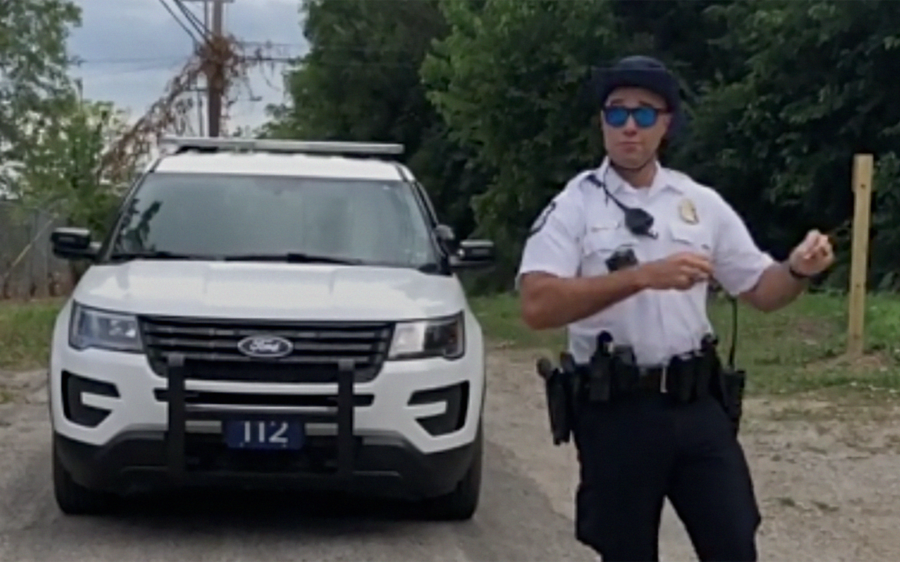 Around Columbus, Ohio, Officer Anthony Johnson is known affectionately as “the dancing cop.” He has his own social-media presence, including an account on TikTok, the increasingly popular Chinese video-sharing app, where he uploads footage of himself warmly interacting with his community—one that is mostly Black and mostly teenaged. (Johnson himself is biracial—his mother is white, his father Black—and white-passing.) The clips on his TikTok, @ohnoitsdapopo online, feature Johnson in playful interactions, like challenging kids to basketball games. These images act as a counter to the community’s less favorable view of the Columbus police officers, one of whom shot and killed 13-year-old Tyre King in 2016 when he mistook the youth’s BB gun for a firearm. Johnson’s TikTok, which has more than 246,000 followers, presents him as the idealized cop: benevolent, friendly, and focused on community engagement.

Last month, however, Johnson’s image as the good officer broke: He was caught on camera wielding a shotgun and punching an unarmed Black man in the face when the man refused to comply with police orders. As an investigation of the altercation began, the body-camera footage of Johnson went viral on social media, revealing a version of the dancing officer that challenged his careful curation. The two versions of Johnson illuminate a rift between how police portray themselves online and who they are offline. They also raise a larger question: Why are cops on TikTok at all?

TikTok, like many social-media platforms, is undoubtedly dominated by the young e-boys and e-girls of America, but adults have entire subcultures of their own, from police officers, to parents, and even businesses and newspapers, like the Washington Post. Yet, according to the analytics company App Annie, most of the platform’s users are young women between the ages of 13 and 24. The 15-second app rides on the heels of the now-defunct Vine, and though it was created in 2017 in Shanghai as part of a merger with the music app Musical.ly, TikTok didn’t truly gain popularity in the United States until earlier this year, when Lil Nas X released “Old Town Road” and the song became a prime source for quirky cowboy memes.

Like many subcultures on TikTok, police officers rally around hashtags. Unlike Facebook, there are no private forums on the app, so hashtags play a vital role in gathering and creating community. From watching hours of police TikToks, it appears that the overwhelming majority of officers online are white, male, and located in rural areas. They often use hashtags like #police, #BacktheBlue, and #ThinBlueLine. The latter phrase dates back to the early 20th century, when it referred to U.S. Army soldiers; these days, the hashtag is used to show solidarity with police officers and recognize them as the thin line between chaos and order.

It’s telling that #ThinBlueLine, with 199.7 million views, is far more popular on TikTok than other pro-police hashtags like #BlueLivesMatter, which has a comparatively paltry 9.9 million. Could this hashtag signify a rebranding of pro-police movements? Perhaps there is a growing awareness of the antagonism met with #BlueLivesMatter or merely a desire by police to share a window into how they service the public. It’s not clear whether police TikToks are meant for teens, for families, or for other cops. While writing this article, I tried and failed to get in touch with officers who have TikTok accounts to better understand the appeal of the platform—admittedly, TikTok makes it difficult to reach out to other users, as you have to both be connected to interact beyond the comment’s section.

But I suspect that such a nascent platform offers a kind of blank slate that older social-media sites cannot, a space that doesn’t have the kind of pre-existing associations with law-enforcement figures that plague the likes of Facebook. (Just last month, 72 Philadelphia police officers were removed from street duty after a watchdog organization released a database of racist rants and memes shared by police on the network.) How would TikTok handle a similar situation?

It’s not clear whether police TikToks are meant for teens, for families, or for other cops.

Yet it’s worth wondering what laws or guidelines may change how officers can engage with TikTok. For instance, many officers say in their TikTok bios that they record videos only when they are off duty, but how do we know that for sure? Are they legally allowed to be in uniform on camera? Will they use TikTok to solve crime or raise awareness? And were an officer to post hateful or racist messages, what consequences would they face beyond being banned?

Upon first opening the app, users enter TikTok’s “For You” page, whose recommended videos rely, as with other social-media platforms, on algorithms to show you new, relevant content. TikTok has already done the calculations, and it knows what will reel you in and keep you scrolling; once you engage with one cop on TikTok by liking, following, or commenting on their videos, you’re likely to see more. This is how I first encountered @officermoorefpd, a bright-faced Montana officer named Liza who, in her viral video, warns underage girls about the risks of sharing their phone numbers online. Her video has 1.2 million likes (TikTok doesn’t display the number of views a video has), and cycled through the “For You” page for weeks—no small feat, considering the amount of content on the platform. In the clip, Moore warns girls that posting their phone numbers opens the door for strangers to easily find out where they live, who their parents are, and where they go to school.

Moore’s post has been lauded for protecting young girls on the emerging platform—a necessary measure given that it has already come under fire for a host of issues involving underage users. Many younger female TikTok users have reported harassment and inappropriate comments by sexual predators; last month, BuzzFeed News reported on a group of young women that banded together to expose and fight back against TikTok’s already robust population of creepy men online. The platform has already faced repercussions for its perceived threat to children: Last February, the Federal Trade Commission slapped a $5.7 million fine on TikTok for collecting data on users under 13 without parental consent. In India, the app was temporarily banned after mounting fears over teens sharing sexually explicit content. 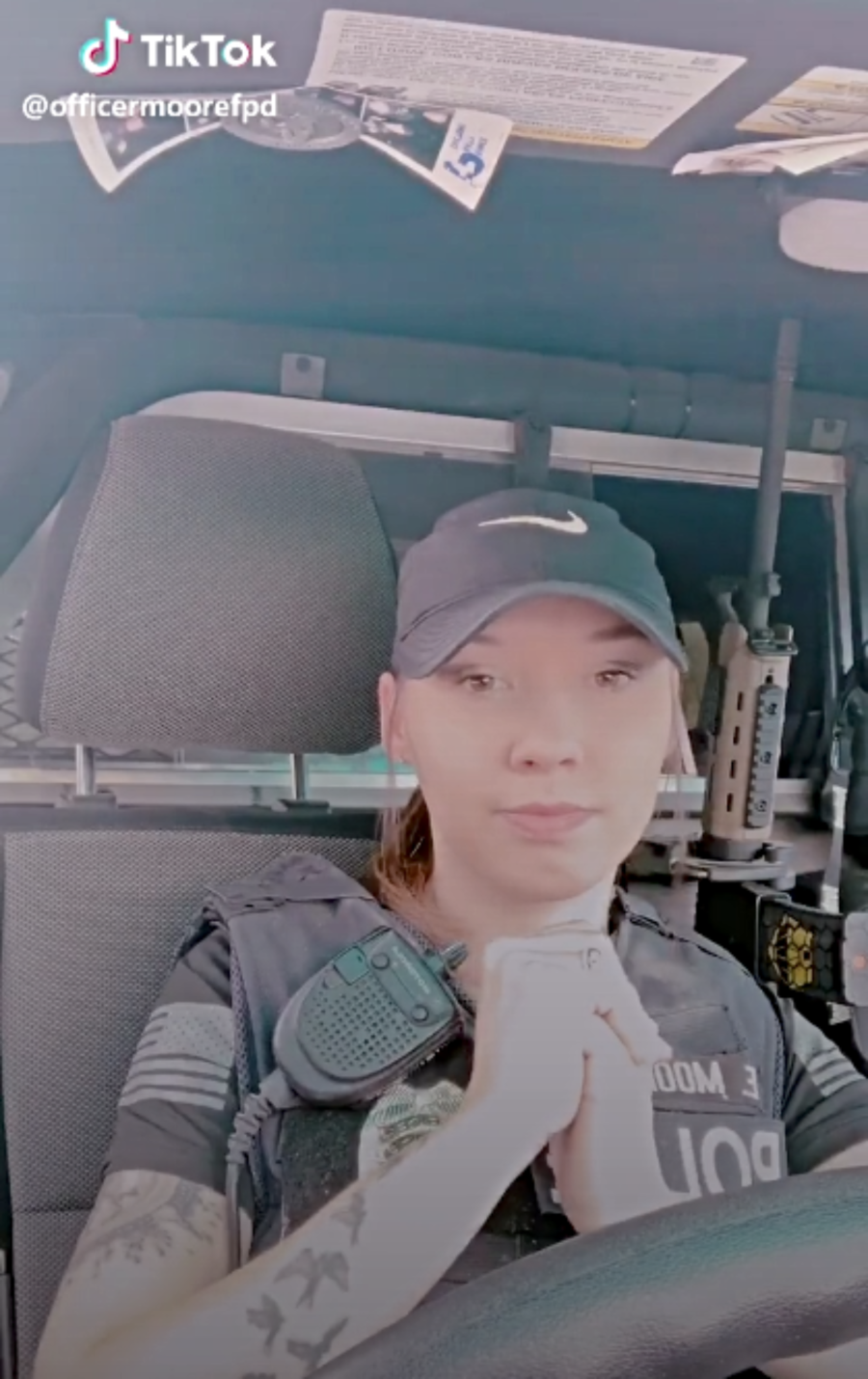 Although TikTok does have a Safety Center and uses artificial intelligence to remove inappropriate videos, like all social media its apparatuses meant to wipe out harassment are generally flawed. Officer Moore’s precaution, then, is not unfounded, but her intimate understanding of the platform makes it clear that police are on TikTok and even if they’re off duty, they’re looking out for illegal activity.

On the other hand, some argue that the positive images of police are beneficial for creating good police-community relations. Yet in the latest cop TikTok I’ve seen on the “For You” page, even the lightest jokes hint at the power dynamic between ordinary users and the cops that lurk in the digital shadows. An officer in full gear, for instance, tells viewers that he’s their new dad, he’ll tuck them into bed and let them stay up late playing video games. TikTok commentors appear to welcome his presence, responding with positive comments and likes.

On TikTok, officers get to connect more intimately with the public than they might without social media, airing their frustrations about speeding drivers and flexing their bullet proof vests and handcuffs. In one video, @officerpeters lip syncs to British pop group Little Mix while shoving a pretend perp into the backseat of his cruiser. In another, an officer uses a baby voice to make serving people warrants seem light and fun. But even such innocuous clips make clear the potential for violence; a baby voice doesn’t make a cop any less threatening, and their penchant for gravitating toward “harmless” sound suggests that, whether they want to admit it or not, they know, and delight in, the power afforded to them by their uniforms.

Read this Next: Will Filming the Police Keep Us Safe? 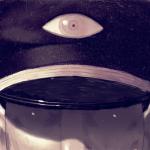 by Victoria Law
There’s a cultural idea that having someone looking over our shoulder makes us behave better. From fake security... 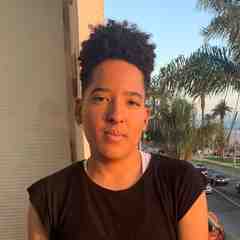 Lillian is a reporter and poet based in Los Angeles. Their work can be found in LAist, ArtNews, Hyperallergic and more.