During Uprisings, Looting Is an Effective Form of Protest | Bitch Media

Looting Is the American Way 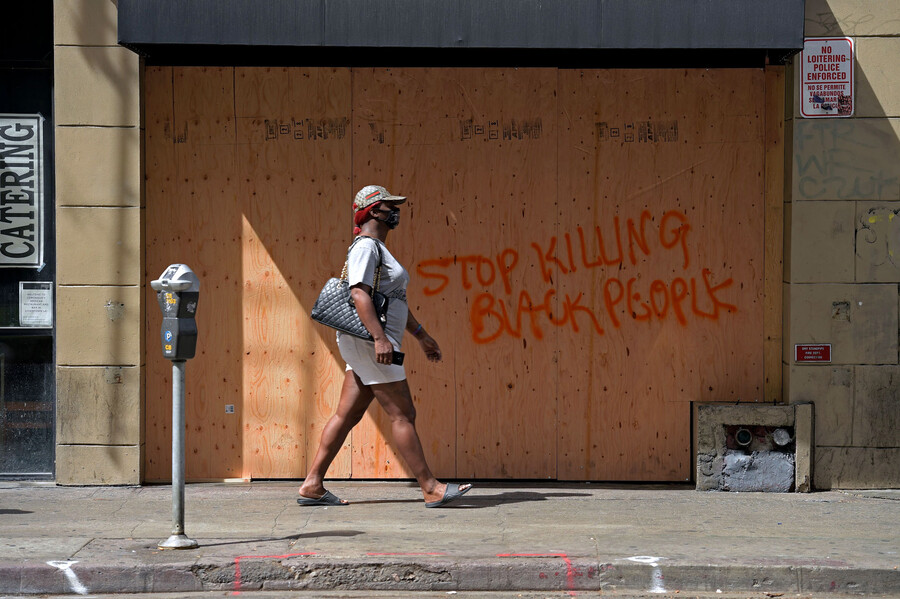 A woman walks past a boarded up store after demonstrators protested the death of George Floyd in downtown Los Angeles, California, on May 31, 2020.  (Photo credit Agustin Paullier/AFP via Getty Images)

In their 2018 book, As Black As Resistance: Finding the Conditions for Liberation, Zoé Samudzi and William C. Anderson argue that political transformation in the United States won’t come through electoral politics, but instead from a transformative politic rooted in anarchist theory. In a chapter on self-defense, Samudzi and Anderson suggest that white liberal politics ask Black people to risk their lives in order to stop white America from killing them. They write, “Through dialogue and discussion, protest and pain, and brutality and death, those oppressed by white supremacy are supposed to work to educate their oppressors on how not to oppress them: to risk death in order to show our oppressors we are not deserving of their violence…White supremacist logic has been so convincing that we oppressed people have largely come to believe that self-defense itself is violence.”

Samudzi and Anderson’s astute analysis can be observed in real time, as conservatives and liberals alike in the United States have spent a little less than a week decrying what they consider violent protests, rife with rioting and looting. From where I’m sitting though, rioting and looting looks a lot like self-defense against a violent system—one that is hellbent on oppressing and killing BIPOC, especially Black people. This system has been horrifyingly successful in that mission and specifically successful in using police to achieve those ends. Modern policing, particularly in Southern states, stem from slave patrols, a centuries-old practice where vigilantes had the main raison d’etre of returning enslaved people who’d escaped to the white people who owned them. Slave patrols also enacted racial terror with the goal of preventing enslaved people from revolting—or rioting.

This wasn’t the first time the United States made such an attempt: This country has always tried to quell what it considered violent revolt against the ruling class, even while it was still a British colony. This manifested in the forced conversion of enslaved people to Christianity, as the white ruling class feared that enslaved Muslims would spearhead revolts like they had in Hispaniola and Brazil. It also manifests in the revisionist history children are taught in U.S. schools—an education that lauds, to a point, the nonviolent tactics the Civil Rights Movement employed and ignores other major revolutionary moments like the 1971 Attica Prison Riot, as this would present violence as, at times, the only answer. Squashing rebellion and sanitizing our collective memories of successful riots is as American as apple pie.

Though liberal politics may have conditioned us to believe that nonviolent direct action is the only way to effectively make change, history shows that’s not the case. Destruction of property as protest is woven into the fabric of this country. There’s no difference between destroying a Target and throwing hundreds of chests of tea into the Boston Harbor—except for the fact that the protestors in Minneapolis didn’t dress as the Indigenous people whose land they stole, which the American colonists did. In May 1886, Lucy and Albert Parsons, along with their labor comrades, marched for the eight-hour workday.

Over the next several days, police attacked them and the other protestors, which culminated in the sham trial and execution of Albert Parsons, August Spies, George Engel, and Adolph Fischer in what is now known as the Haymarket Affair. In 1969, queer rioters, led by Black and brown trans women, fought against police agitators for six nights; the Stonewall riots are considered the launching point for the modern queer liberation movement. The protests taking place after George Floyd’s murder are supported by a rich American history of marginalized people fighting for their rights. The riots and looting happening all over the country are a proportionate response to state-sponsored, legalized violence and robbery.

To consider riots violent, one must consider destruction of property violent. Buildings, cars, and merchandise can be replaced; Floyd’s life cannot be given back to him. Violence is what the state uses to kill Black people, to partially blind journalists, and to run over protestors. I would argue that any actual violence in the form of fighting agents of the state is justifiable and should be considered self-defense. Regardless of your own personal take, no amount of flipped cop cars and burnt down precincts could even begin to rival the destruction done by the state through the police force. In 2019 alone, police shot and killed 1,004 people in the United States. Those lives cost more than a $100,000 squad car. The outrage over damaged property shows plainly who and what this country values, and it’s clear that the police state values private property, rather than people, and will go to extreme measures to protect the latter.

Squashing rebellion and sanitizing our collective memories of successful riots is as American as apple pie.

The state’s violence isn’t only physical—it’s economic, too. Not only does the capitalist system under which we are being forced to live steal our labor to fatten the bank accounts of billionaires, but cops actually play an active role in stealing our property. Asset forfeiture, according to the Washington Post, “is a contentious practice that lets police seize and keep cash and property from people who are never convicted of wrongdoing—and in many cases, never charged.” That sounds suspiciously like looting. Notably, in 2014, the annual value of assets seized by the federal government was greater than the losses of all annual burglaries. So, the government, specifically law enforcement, was stealing more from American citizens than so-called burglars, robbers, and looters. In 2017, the Justice Department found that their forfeiture programs had brought in a whopping $28 billion over the last decade. Because of loose regulations around asset forfeiture, not only are most of the assets not connected to any criminal activity, but they also are kept by whatever entity seizes them—making it a very profitable practice for law enforcement agencies.

The United States of America was wholly constructed on stolen land by enslaved people. The violence perpetuated by the government since its inception is immeasurable. Since the day the British colonizers arrived, Indigenous, Black, and brown people have died, their land and labor have been stolen, and their descendants have seen oppression transform itself into updated, yet still violent iterations. As such, we can understand the destruction of this system, of cop cars, of capitalist empires as the birth of a new, more just country. As Samudzi and Anderson wrote, “This system was not designed for us, it was built on top of us. Our destruction is built into it, but our liberation can be built from its downfall.” Let’s hope they’re right.

Read this Next: Lip Service 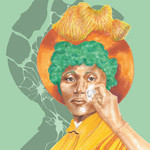 by Kim Kelly
Desirability politics, social capital, and lookism remain present in even the most conscious radical spaces.