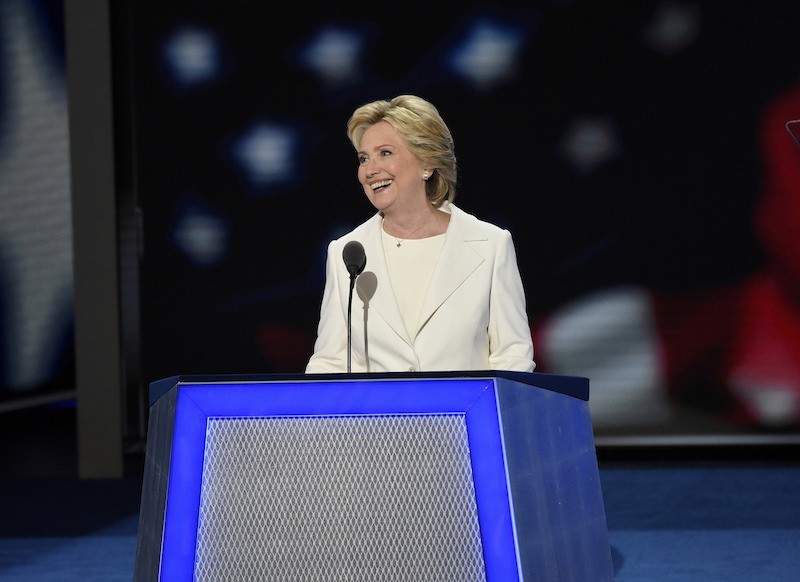 This week at the Democratic National Convention, speech after speech heralded Hillary Clinton’s political acumen and her history of leadership. But several speeches put some more complicated credentials front and center: Her success as a mother.

There’s a years-long history in American politics of framing Republicans as the daddy party and Democrats as the mommy party—the idea that Democrats care about domestic issues like healthcare, education, and aiding the poor, while Republicans focus on business and the military—but rarely is that frame applied as literally as it was this week in speeches made by Bill Clinton and Michelle Obama. While the work and emotional labor it takes to raise a child is routinely underappreciated in our society (as a working mom of a preschooler, I constantly bemoan, at the risk of boring all my friends to death, the lack of government-subsidized childcare), selling Clinton as a great future president because she’s a great mom is a rhetorical strategy that relies on pernicious cultural ideas of domestic, apolitical motherhood to advance liberal politics and gender equity.

During his speech this week, Bill Clinton was careful to point out that Hillary always put parenting first, even when she was working in high-powered political positions:

“Through nursing school, Montessori, kindergarten, through T-ball, softball, soccer, volleyball, and her passion for ballet, through sleepovers, summer camps, family vacations, and Chelsea’s own very ambitious excursions, from Halloween parties in the neighborhood to a Viennese waltz gala in the White House, Hillary first and foremost was a mother.”

His speech framed Hillary as “the best mother in the whole world,” the driving force behind his success as well as her own. In an anecdote about helping Chelsea move into her dorm at Stanford, he said that he was “in a trance… trying not to cry” while Hillary, with great industry, finished the work that needed to be done, down to the smallest detail. The mother, doing the domestic and caring work, “born with an extra responsibility gene” (as if the expectation of responsibility we have of mothers is biological rather than cultural), as the father stands idly by. It’s also worth noting that his discussions of her professional accomplishments focused on her work for children: fighting for equal access to public education, starting a preschool literacy program, increasing adoptions from foster care, and securing health insurance for children. 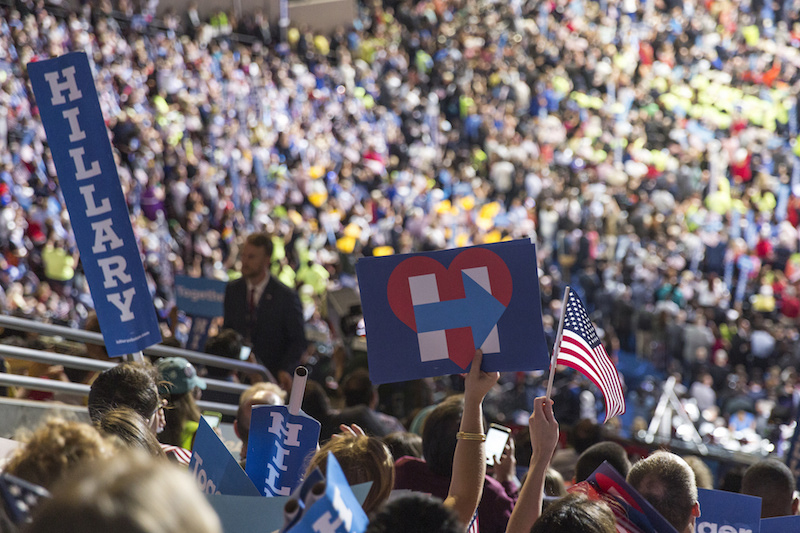 “I’m With Her!” Excited Clinton supporters at the DNC. Photo by Lorie Shaull (CC).

During her powerful speech earlier this week, Michelle Obama emphasized that Hillary has raised her daughter “to perfection” and was as selfless in her devotion to politics as she was to her daughter. When Clinton failed to secure the presidential nomination in 2008, Michelle Obama said Clinton was not disappointed—because she is selfless and focused on service. This kind of emotional labor—denying or repressing real and appropriate feelings, especially negative ones—is what we expect from women in general, and mothers in particular. They can’t have feelings of disappointment or resentment when they don’t get something they want badly or have worked hard for because they must focus on the good of others, especially children. And even when their jobs are incredibly demanding, they must always raise their children “to perfection.”

Read This Next: Newspapers Herald Clinton’s Nomination by Running Photos of Her Husband
Read This Next: What’s the Republican Recruitment Strategy? Racism, Plain and Simple

In an op-ed for the Washington Post, journalist Stacia L. Brown noted the DNC’s repetition of Clinton’s mothering abilities and acknowledged that it would rankle many female voters who have fought for their intelligence and workplace skills to be recognized. But, Brown writes, motherhood is important, too:

“The campaign feels the need to remind us of Clinton’s wins as a mom because those gains are every bit as political as her office and fieldwork. The Clinton campaign needs the public to consider the venerable, overqualified, brilliant legal eagle as a woman capable of simultaneously excelling at remembering when a little boy’s back brace will be removed, hovering in a daughter’s freshman dorm room at drop-off, having fiercely protected that daughter’s privacy at the most difficult time in their family’s lives. Those are also venerable accomplishments. They’re ones that, admittedly, are never emphasized in most men’s political campaigns, but then, most male candidates don’t have as strong a record of hands-on, school-and-schoolyard-bureaucracy-fighting, stroke-a-sobbing-daughter’s-hair-after-a 14-hour-day-fighting-the-system parenting.”

However you feel about it, there’s no denying that highlighting Hillary Clinton’s mothering abilities is a smart move, politically. Framing a major female politician as a “mom first” is not a new idea—precisely because it works. In her 2014 book The Political Uses of Motherhood in America, scholar Cynthia Stavrianos examined the way politicians and political activists often invoke “their political status as mothers to organize and authorize their political action in the past.” A Pew Research Center survey on voters’ perceptions of the candidates found that people don’t see Hillary as admirable, able to unify the country, or as having good judgment. Trump has railed throughout his campaign that she’s not trustworthy, and journalists and commentators have noted throughout the DNC that the campaign is working hard to make people see Clinton as warm. These are all qualities that we associate with motherhood. Focusing on Clinton’s mothering skills and the political work she did on children’s issues is a calculated decision that Democratic speechwriters made with an eye on the polls. It positions her as a maternal figure—she has “spent decades” doing “relentless, thankless work” for the nation’s children—which turns up the volume on the character traits the electorate thinks she lacks. It also glosses over the more controversial aspects of her political work, especially those related to foreign policy. 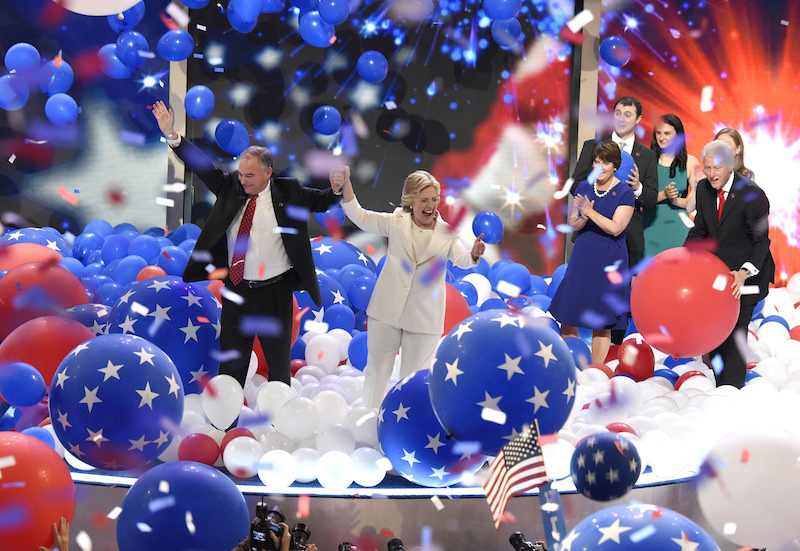 It’s not a presidential campaign without a gigantic balloon drop! Photo by ABC/Ida Mae Astute (CC)

For all its savvy, this is a troubling strategy. It means that the best way to position a female candidate is to frame her political work as an extension of her role as mother of her family to the larger family of the nation. This is why the focus is on her domestic policy work, in particular for children, because a good mother’s main concern should always be home and children. Foreign policy—work outside the home—is the father’s job. It’s an effective strategy, to be sure, but what does it cost us to rely on retrograde gender stereotypes to generate the momentum that will break the “ultimate glass ceiling”? When we are asked to think about what makes Hillary a good mother, both to her own daughter and to the nation’s children, and to use those qualities above all others as proof of her moral authority and fitness for this nation’s highest political office, isn’t it implied that the best thing even the most accomplished women can offer society is motherhood? And doesn’t it return us to the idea that the most valuable work women do is domestic and caring work?

This Clinton-as-maternal-figure messaging works, but it also emphasizes that we still have a long way to go in our quest for gender equity. It proves that we still expect women to value home and children over professional ambitions and accomplishments, and that we still value women as mothers more than anything else.

Sarah Mirk contributed to this article.

Read This Next: Newspapers Herald Clinton’s Nomination by Running Photos of Her Husband
Read This Next: What’s the Republican Recruitment Strategy? Racism, Plain and Simple 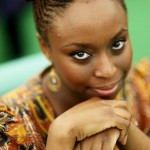 by Aqdas Aftab
I had to wonder how Adichie’s recent responses to trans folks failed her own feminist politics in her new book, Dear Ijeawele.