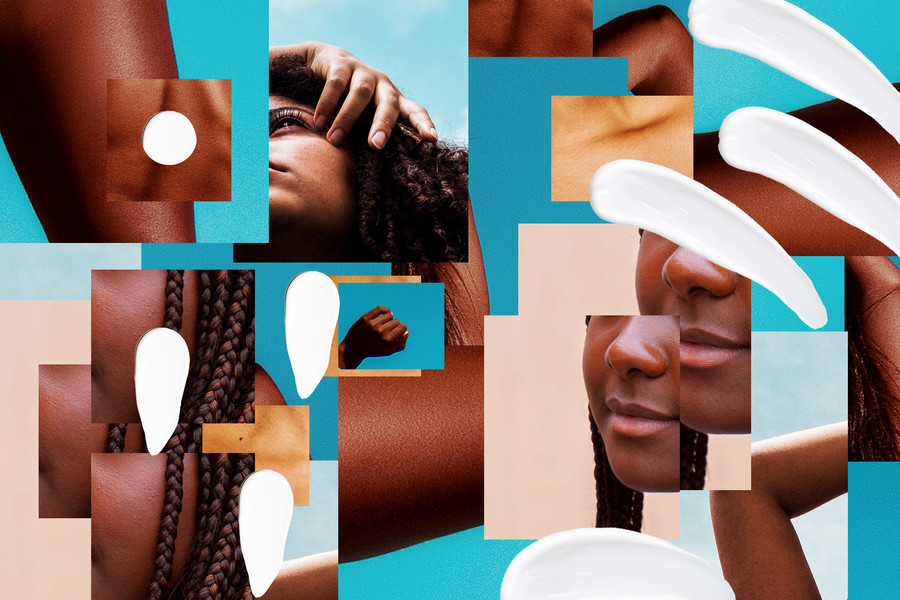 A 2018 study found that Black and Hispanic people are much less likely to use sunscreen than white people. The researchers explained, “While most participants recalled family discussions about sunscreen and sun protection, the understood intent was to warn against ‘further skin darkening’ or to ‘prevent aging,’ not to reduce sun burns or skin cancer risk.” The myth that people of color are inherently protected from the sun due to melanin, and therefore don’t need sunscreen, is a pervasive one. While skin cancer is less common among people of color, it’s still possible for them to develop the condition, and therefore should not be taken lightly. But this need for sun protection is complicated by the racialized way in which sunscreen is marketed, ongoing myths around who needs sunscreen, the idea that sunscreen is just a way to maintain proximity to whiteness, and the ways that many sunscreen companies still fail to consider the needs of darker skin tones when creating their formulas.

The idea that people of color, especially darkerskinned people, don’t need sunscreen is still a pervasive myth, and in some ways, this makes sense: The American Cancer Society finds that the annual incidence of melanoma is five in 100,000 for Latinx people and one in 100,000 for Black people, compared to 26 in 100,000 for white people. But a lower likelihood of skin cancer isn’t an excuse for giving up on prevention. For example, a 2016 report from the Centers for Disease Control and Prevention (CDC) and the National Cancer Institute (NCI) found that men across races have a higher rate of new cancers than women, but we don’t tell women that they don’t need to wear sunscreen. Our likelihood of skin cancer increases dramatically as we age, but that doesn’t mean kids and teenagers should skip the sunscreen.

“All people of color need sunscreen—end of story,” Tacola Buyarski, creator of PoC Skincare the Group, a Facebook group with more than 17,000 members, tells Bitch. “The fact that some POC think they don’t need it and they’ll be just fine is so awful.” Every week, people of color are in Buyarski’s group asking how others are using sunscreen, how often they need to use it, and how they can find sunscreens that don’t make them look ashy. Asking is the first step. The CDC recommends sunscreen of at least SPF 15 before exposure, regardless of how sunny it is outside. While white people typically develop skin cancer in areas that get the most UV exposure, that’s not the case for Black people, who are more likely to get skin cancer on the bottoms of the feet, palms of the hands, and underneath fingernails and toenails.

It’s scary, especially considering that Black people are more likely to be diagnosed when they have later-stage melanoma and have a survival rate of 69 percent. For comparison, white people have a 94 percent survival rate. “The media perpetuates this stereotype that the darker you are you can’t and won’t burn, that skin cancer is only relevant to paler skin tones, [and] that trauma-induced hyperpigmentation is all we really experience,” says Shawnice Austin, a member of POC Skincare. “I’ve never seen a commercial with a woman my skin tone soothing sunburn. Protecting our face from the sun is never emphasized. They don’t acknowledge dark skin on skin cancer commercials. Fade creams always mention dark marks from acne but never sun spots.”

Another member of POC Skincare, Mel Janeen, agrees that the lack of sunscreens that take darker skin tones into account is a huge problem. “I have strong feelings around tinted sunscreens, and how I’ve never seen any SPF tinted darker than a manilla folder.” We can assume that marketers and advertisers don’t see people with darker skin as potential consumers, and therefore don’t target products toward them. Thanks to this exclusion, some people of color turn to alternative methods of protection that don’t actually protect their skin. There’s still an ongoing myth that coconut oil is still a skin protectant and DIY sunscreens remain popular though they’ve already been debunked.

In a way, distrust of dermatology and medicine in general in communities of color isn’t surprising given the history of medical conspiracies that turn out to be true. Plus, one study from 2012 on health disparities by demographic found that nearly 50 percent of dermatologists said they felt they received “inadequate in training them on skin conditions” in Black people. When you feel like you aren’t having your needs catered to or your experiences centered, it’s easy to sidestep medical recommendations. In the case of sun safety, however, ignoring or overlooking medical advice has dangerous consequences.

On the other hand, some people of color feel pressure to use sunscreen not for health reasons, but to maintain proximity to whiteness. “Back home in India, sun protection is either using a fan or shawl to shield your face or just not going outside at all,” says Jaslin Kaur. “Whitening products are advertised like ordinary shampoo, so I wish more people in my community used sunscreen and enjoyed the outdoors without telling their daughters they will get too dark, or else no one will marry them.”

Essence Moore, Licensed Esthetician and Owner of Lineage Skin & Hair Studio in Harlem, says that sunscreen myths still hold strong in communities of color. “Typically, people of color fall victim to the belief that they do not need sun protection,” Moore says. “It is important that people of color wear sunscreen because most people of color [are concerned about] dehydration/dryness in the skin, uneven skin tone (hyperpigmentation), and signs of age (moles, freckles. etc.), [and] wearing sunscreen is the number one way to prevent and reverse these concerns.”

In a similar way that the racialized aspect of Black women’s hair can prevent us from exercising, inadequate sunscreen can act as a barrier when it comes to people of color going outdoors. Even if you’re aware of the risk of sun damage and skin cancer, if you can’t find a sunscreen that serves your needs, you’re more likely to avoid the sun altogether. While sunscreen is just a piece of the puzzle when it comes to the ways that people of color don’t always as readily engage with the outdoors, it’s one worth considering, as sunscreen, its marketing, and its physical makeup is just another way that white people are prioritized in the outdoors industry.