We know, and you know, that pop culture is a lot more than just entertainment. Through books, films, music, television, and more, we learn about our world and others—and, in many cases, they prepare us for some of the most important and memorable events of our lives. Pop Culture Prepared Me is a new series that will highlight lessons from pop culture that continue to resonate.

In his 1976 book The Uses of Enchantment: The Meaning and Importance of Fairy Tales, Bruno Bettelheim examines children’s fairy tales from a Freudian perspective, exploring how such stories are ultimately useful to children because they allow them to solve existential problems like separation anxiety and sibling rivalries through avatars like Hansel and Gretel and Little Red Riding Hood. When children experience other children conquering their fears, they, in turn, feel confident that they can conquer the fears in their own lives.

Let’s hope the same holds true for adults (and children) trapped in this neo-Nazi, misogynist, white-supremacist Trumpocalypse, because I’ve been reading about and watching dystopias my whole life, and I’m ready to resist and rebel. So glad yet horrified that pop culture prepared me for these terrible, horrible, no-good, very-bad, troubled times!

Charlie Chaplin plays both a ruthless fascist dictator and a Jewish barber in this film, condemning Hitler, Mussolini, fascism, anti-Semitism, and Nazis in one fell swoop. Nominated for five Academy Awards, The Great Dictator was released while the United States was still formally at peace with Nazi Germany, so that’s shameful and horrible. In fact, the U.S. wouldn’t join the war effort for more than a year after the release of The Great Dictator. Making art that documents the resistance to fascism is important not only because it creates a historical record, but also because it can inspire future generations to act.

The Trumpocalypse took 1984 from high-school reading requirement to number one on book lists everywhere. HMMM I WONDER WHY.

It’s 1984 and the Ministry of Truth has been created for historical revisionism, changing past newspaper articles to always support the party line—creating ”alternative facts,” if you will.  Big Brother is the U.K.’s leader, whose party “seeks power entirely for its own sake. It is not interested in the good of others; it is interested solely in power” and employs  slogans like “War is peace,” “Freedom is slavery,” and “Ignorance is strength.” So George Orwell was completely right, just off by several decades. 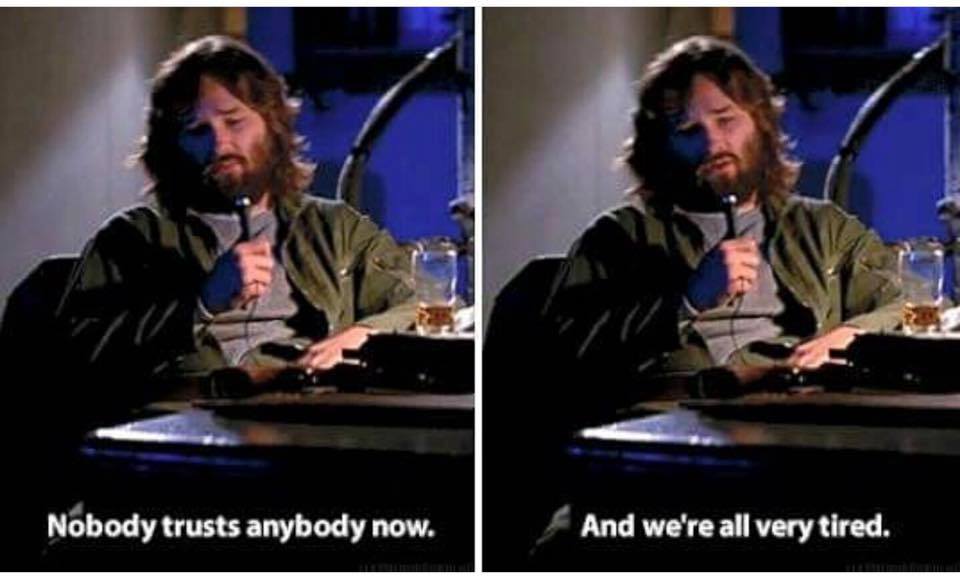 This is what it what it looks like when you’re trapped in Antarctica with your crew and an evil alien who can shapeshift into anything or anyone is killing everyone around you until you don’t know who’s an alien and who’s human and who might be trying to kill you but you have nowhere to run because you’re trapped in Antarctica so you’re gonna record your words for those who might discover your body and wait to see if you survive. This is how I feel on the inside every day.

In all seriousness, this 1982 film is among John Carpenter’s best and a scene in which Kurt Russell’s R.J. MacReady slowly tests each crew member’s blood to see if it reacts to a flame— indicating that the person is actually an alien—is so tense and so good.

This is so real I don’t even want to talk about it. The great Margaret Atwood novel came out in 1985, a movie version was released in 1990, and this year we’re going to be treated to a Handmaid’s Tale miniseries, but why does it have to be so real? The miniseries stars Elisabeth Moss as Offred, a woman who is assigned to and forced to live with a more powerful couple purely for reproductive purposes under a theocratic dictatorship in a dystopian future after a Christian fundamentalist group overthrows the U.S. government. So I don’t want to talk about that at all, but I do highly recommend the novel and am very eager to watch the miniseries, and if you haven’t read it, be prepared to be chilled to your very core.

This gorgeous graphic autobiography, later adapted into the Academy Award-nominated 2007 film, follows Marjane Satrapi through her childhood in post-Islamic Revolution Iran. Marji turns to punk, reads about revolution and socialism, and practices teenage rebellion to resist and survive a theocratic conservative government, and all these lessons in creative resistance and survival are lessons we are going to need for the next three years, eleven months, and three weeks.

The year is 2505 and the president of the United States is former professional wrestler President Camacho. Two Americans who have been cryogenically frozen for the past 500 years (Luke Wilson and Maya Rudolph) wake up to find that the United States has lost its infrastructure, is succumbing to environmental destruction, and is populated with illiterate, anti-intellectual citizens named after corporate products like Beef Supreme and Dr. Lexus. This definitely isn’t our future or our present, RIGHT? 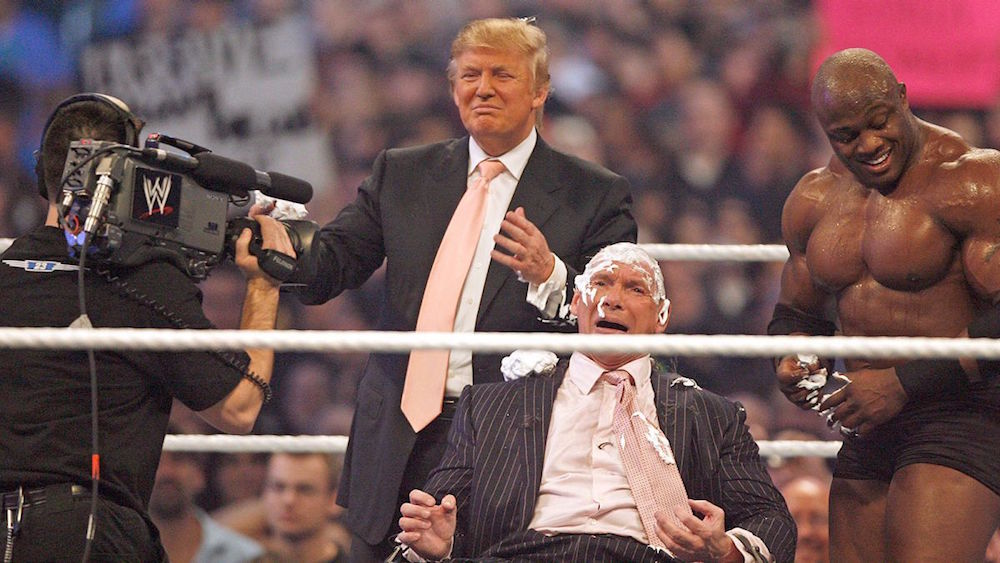 Based on the 1982 Alan Moore comic-book series, V for Vendetta is set in 2020 (terrifyingly soon) where a neo-fascist regime controls the U.K.; news programming is state-run; and political opponents, immigrants, Muslims, atheists, homosexuals, and other “undesirables” are imprisoned and executed in concentration camps. This corrupt government is eventually overthrown—but only through the collective power of protest. (A recent study showed that only 3.5% of a population resisting is needed to topple a dictator. REMEMBER THIS.)

Okay, America, were you into Katniss Everdeen or not? Are we on the same page about violent dictatorships and revolution?

Do we believe in the mockingjay or not, AMERICA? 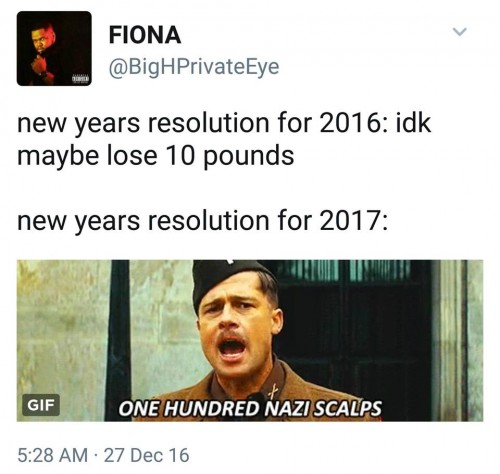 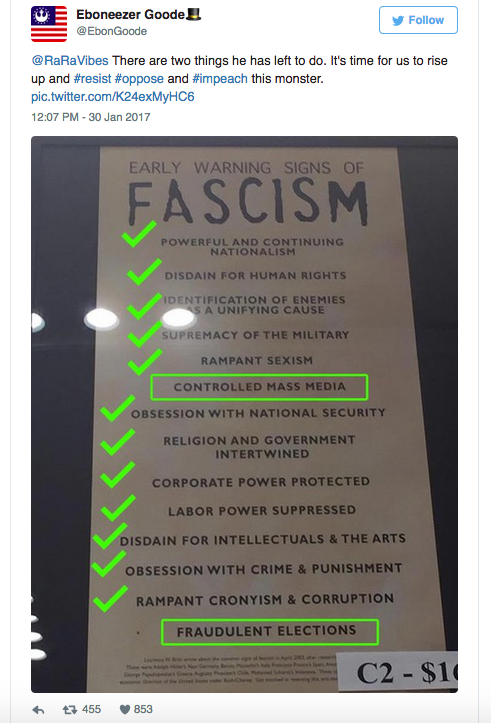 This Holocaust Remembrance Day, Trump’s commemoration statement did not mention the six million Jews killed, or any Jews at all. This “de-Judification” of the Holocaust is an intentional strategy that white nationalist Richard Spencer praised. Trump’s statement paves the way for future and more widespread Holocaust denial, because this is Holocaust denial being institutionalized at the highest level of government. But guess what? I just came back from the Holocaust Museum in D.C., and I’m rewatching this Tarantino gem this weekend. I am ready to punch and destroy Nazis.

In Inglorious Basterds, Tarantino offers  an alternate history of World War II in which dual plots to assassinate Hitler and the Nazi party leadership collide at the premiere of a Nazi propaganda film. Shosanna Dreyfus (Melanie Laurent) plans to burn the cinema to the ground with the Nazis inside, while First Lieutenant Aldo Raine (Brad Pitt) has assembled the Basterds—a U.S. army unit comprised solely of Jewish-Americans who kill and scalp Nazi soldiers—to attend the premiere, because, as Raine put it, “A Nazi ain’t got no humanity. They’re the foot soldiers of a Jew-hatin’, mass murderin’ maniac and they need to be dee-stroyed.”

In this satirical song, Immortal Technique raps in the persona of a fictional “bankster” who brags about his crimes: evicting people from tenements, foreclosing on homes, and embezzling money. “Your working class money ain’t fucking with me,” the bankster says. “I own a building for each one of my children’s children.” It’s actually hard to say which line in the song is the most Trumpian, but check out this snippet of a verse:

Make money every day the world burns on its axis
While y’all struggling to pay taxes
‘m getting my money the fastest
Memos and faxes, shredded-up documents
Slush funds through the corrupt continents
But they don’t want me indicted
‘Cause they don’t want my dirty laundry aired when I fight it
Don’t get my lawyers excited
‘Cause what good is a law if you can’t rewrite it?
I got CIA, traitors, dictators
So fuck y’all whistleblowers and haters!

That is exactly who Trump is. This song also features a sample from the 1976 film Network, which is about an outrageous and provocative television star whose ravings are allowed to go to unsettling extremes, so this song doubly prepared me. 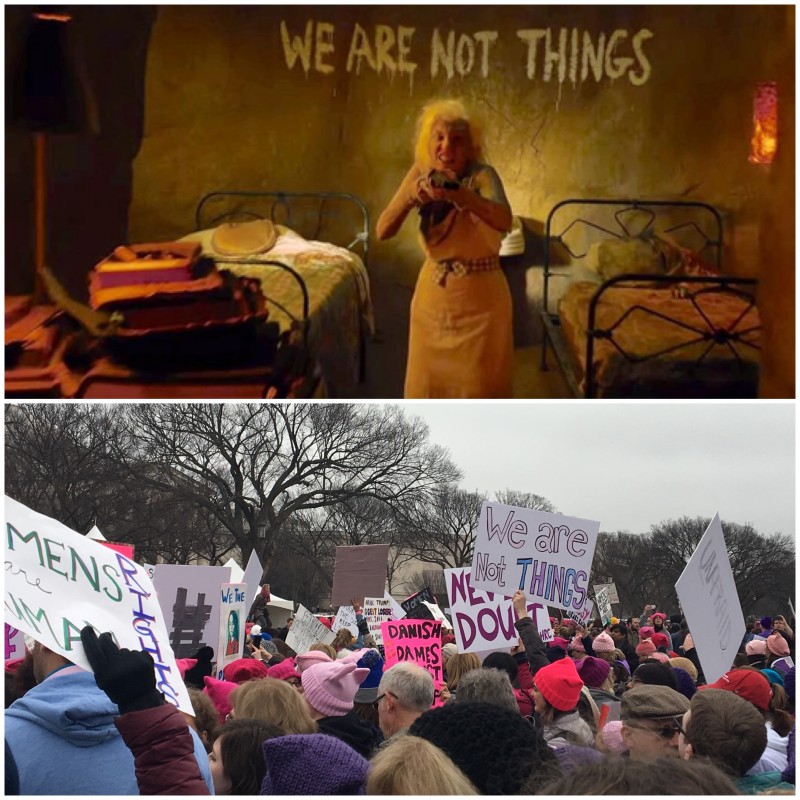 In this incredibly dark and excellent dystopian film, the world is now a desert wasteland and civilization has collapsed while tyrannical war lords battle each other for slaves and resources. Six women (including the perfectly-named Furiosa) escape the clutches of the horrific patriarch Immortan Joe and are determined to find a place to be free. This film is simultaneously thrilling, exhilarating, and deeply depressing, a disturbing wake-up call—and as this sign from the Women’s March in D.C. shows, I’m not the only one with it on my mind now that we live in the Trumpocalypse. Let us heed the messages of the dystopian worlds that came before us and rebel with all we’ve got.