Popaganda Episode: A Protest is Not a Riot | Bitch Media

Popaganda Episode: A Protest is Not a Riot

The movements that have arisen recently to challenge racism and violence in our justice system have created not only discussion and outrage, but a cultural shift. Out of racism and violence and sexism has come creativity: songs, chants, art, policy ideas, creative ways to push back against power and reimagine the way our world can be.  On today’s show, we’re looking at the culture that has grown from recent protests—in Portland, in New York, in St. Louis, San Francisco, and Cleveland—from art made on the streets to songs that wind up at the Academy Awards.

First, writer Tasha Fierce reads an essay that will be published in the upcoming Law & Order issue of Bitch exploring the history of black women leading civil rights movements—from the 1960s all the way to Black Lives Matter. Then, we listen through a growing archive of protest chants and think about how future historians will look back on today’s protests. Finally, musician and writer Jordannah Elizabeth makes us a mixtape of current protest music.

HOW WILL WE REMEMBER TODAY’S PROTESTS?

This show is generously sponsored by Oregon State University’s Ecampus, which is ranked #5 on the 2015 list of America’s best online bachelor’s degree program by U.S. News. Oregon State University Ecampus delivers more than 40 undergraduate and graduate degrees and programs online including a B.A./B.S. in Women, Gender and Sexuality Studies. You can start any season, so apply today. Check out the courses and enroll at ecampus.oregonstate.edu.

The title of this show was inspired by a quote from Don’t Shoot Portland organizer Teressa Raiford in recent Portland Mercury article “No Riot Here.”  The audio of chants featured in this show come from videos shot and shared by the folks at WetheProtesters.org as well as YouTube user Wayne Heaney. The song heard at the beginning and end of this show is by the band English Teeth, who shared their songs at protesttunes.com. The quotes that kick off the show are from brand-new documentary Arresting Power: Resisting Police Violence in Portland, Oregon. The photos accompanying the show on Soundcloud are by Beverly Yuen Thompson and Mark Dixon, both Creative Commons.

Major thanks to Jordannah Elizabeth for letting us premiere her song A Prayer for Black America, off her new album A Rush, which comes out February 17. You can get a digital copy of her album right here.

Relevant: The Untold Story of Women in the Zapatistas 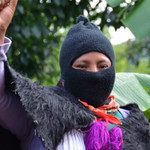 by Victoria Law
Zapatista women now choose their own partners, they often have two to four children, and there has been a dramatic decrease in domestic violence.