Popaganda’s GLAMOUR season makes its debut this week—with an anti-weight-loss infomercial for the ages. In the first episode, host Carmen Rios talks to feminist activists and academics about how diet culture is fueling the kyriarchy, and how all of us can escape its clutches.

Virgie Tovar—the founder of Babecamp and author of You Have the Right to Remain Fat and the forthcoming The Self-Love Revolution: Radical Body Positivity for Girls of Color, breaks down the politics of fat positivity. Caroline Dooner, author and founder of The Fuck-It Diet, weighs in on the danger of dieting. Sabrina Strings, an assistant professor of sociology at the University of California, Irvine, and the author of Fearing the Black Body: The Racial Origins of Fat Phobia, unpacks the racist roots of diet culture, and the continued racist implications of our society’s narrow definition of beauty. And Kimberly Dark—professor and author, most recently, of Fat, Pretty and Soon to be Old: A Makeover for Self & Society, lays bare the reverberations, individually and socially, of walking away from body shame and judgement.

It’s probably not news to Popaganda listeners that our world has a whole lot of opinions about women’s bodies. But in this episode, Carmen digs even deeper—exploring the racist and sexist ideas that perpetuate unrealistic and unhealthy beauty standards for women and girls, and unpacking the impact the diet culture we subsequently live in shapes their lives. She also challenges listeners to envision a world beyond diet culture, and helps chart a course out of it. After this episode, you’ll be ready to say goodbye to all of the expectations our society has saddled you with—and start looking at your reflection from a new, feminist perspective.

Read this Next: Smashing Barriers 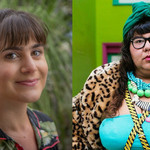 by Bitch HQ
Diet culture is just the newest form of women’s subjugation.