Fashion and Feminism Can Work Together to Defeat Capitalism | Bitch Media

Capitalism has complicated our cultural definition of “glamour”—and in the process, it has corrupted how we see and express ourselves. In the seventh episode of Popaganda’s GLAMOUR season, host Carmen Rios encourages activists to envision a world where glamour is divorced from elitism, excess and exclusion.

Through conversations with journalist Tansy Hoskins, the author of Stitched Up: The Anti-Capitalist Book of Fashion (2014) and Foot Work: What Your Shoes Are Doing To The World (2020); Love the Skin You’re In founder Brie Mathers; and People Tree founder Safia Minney, who’s also the author of Naked Fashion: The Sustainable Fashion Revolution (2011), Slow Fashion: Aesthetics Meets Ethics (2016), and Slave to Fashion (2017)—Carmen examines the ways in which fashion and feminism can take on capitalism together.

Capitalism is what commodifies and objectifies the bodies of women and girls, and encourages them to consume by fostering their insecurities—and fashion, which Hoskins calls capitalism’s “favorite child,” spurs on and benefits from the entire scam. But confronting and rejecting the cultural messages that assign value to our bodies based on wealth and status can be revolutionary acts of reclamation—and help feminists redefine “glamour.

Subscribe to Bitch’s podcasts in Apple Podcasts, on Soundcloud, or on the Stitcher mobile app.

Read this Next: Fashion Victims 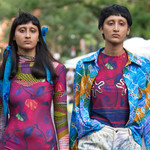