In the second episode of Popaganda’s GLAMOUR season, host Carmen Rios explores the powerful potential of witchy beauty rituals—like hexing the patriarchy, carrying empowering talismans and invoking the names of powerful goddesses alone to yourself in your room.

A group of magical experts in witchcraft and its intersections with beauty culture guide Carmen’s investigation: Pam Grossman, the host of The Witch Wave podcast and the author of Waking the Witch: Reflections on Women, Magic, and Power and What Is A Witch; Gabriela Herstik, the author of Inner Witch: A Modern Guide to the Ancient Craft and the forthcoming Bewitching the Elements: Finding Empowerment through Earth, Air, Fire, Water and Spirit; Dianca London, the former online editor of Well-Read Black Girl and prose editor of LIT magazine; and Maria Vashakidze, the owner and formulator behind the Portland-based values-driven apothecary Seagrape bath+body.

Witches have long led the feminist resistance—and they even helped shape our contemporary definition of “glamour.” Through conversations and visits with her panel of witchperts, Carmen learns about the closely connected histories of witchy feminist movements and patriarchy-smashing glamour magic, how to cast spells for self-love and social change, and what makes a bar of soap into a magically political self-care device. She also realizes that the real beauty secret of witchy women is a feminist consciousness, and an unwillingness to cave to societal expectations about their bodies and behavior.

Read this Next: Binding Harm 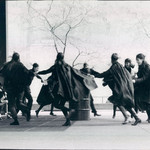 by Jessica Jernigan
To be a witch is to have and to exercise agency on behalf of all.