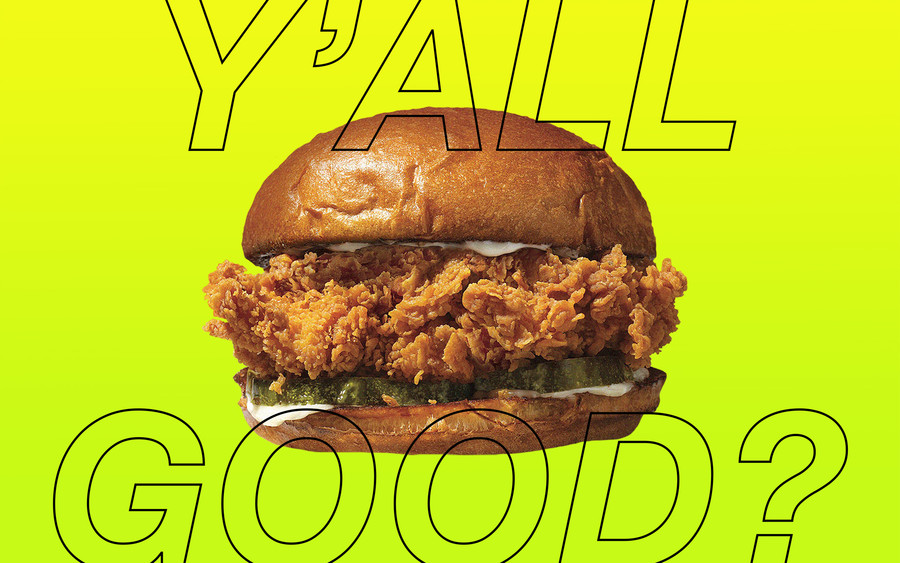 Popeyes recently created a frenzy and generated approximately $23 million worth of advertising in 11 days by launching a new chicken sandwich. Following the announcement of their new sandwich, Popeyes’ Twitter account began responding to tweets from Chick-fil-A and other competitors about their sandwiches. When Chick-fil-A shared a tweet about their original chicken sandwich, Popeyes responded, “…y’all good?” (The International Business Times notes that Popeyes gained 25,000 followers overnight while Chick-fil-A gained 10,000.) This Twitter war over the superior chicken sandwich resulted in Popeyes’ new product selling out, much to the disdain of those eager to try out the sandwich and the frustration of Popeyes employees, who have largely been swarmed with customers without receiving any real support from their employer. As Complex points out, though, the success of this marketing didn’t start with Popeyes—it started with Black Twitter.

Black Twitter isn’t a specific group of people or organization but rather a space where Black Twitter users have formed what Feminista Jones calls a “virtual community.” As Farhad Manjoo wrote in Slate in 2010, “Black people—specifically, young Black people—do seem to use Twitter differently from everyone else on the service. They form tighter clusters on the network…it’s this behavior, intentional or not, that gives Black people—and in particular, Black teenagers—the means to dominate the conversation on Twitter.” Brands have been paying close attention to this community, which is unsurprising considering how many Black people are using the platform. From the recent appropriation of “hot-girl summer,” a term coined by rapper Megan Thee Stallion to then 16-year-old Kayla Lewis’s viral phrase “on fleek” being co-opted by a number of different companies, brands that are trying to sound more cool and more human on social media are profiting from the unique voice that members of Black Twitter have cultivated.

“In 2018, content companies are certainly still borrowing cool, particularly from online communities of color,” writes Keidra Chaney in Issue 26 of Uncanny Magazine. “Want proof? Just check out the number of corporate brands on Twitter who regularly drop memes made by Black teens and African American Vernacular English (AAVE) like ‘let’s get this bread’ or ‘my wig is snatched’ on the daily.” Even the simple response of “…y’all good” has the distinct cadence of AAVE. But Popeyes is far from the only brand to benefit financially from the use of AAVE and the larger use of speech crafted by communities of color.

At the onset of social media, brands sounded like brands; they used the “we” voice, tweeted about new products and sales, and generally didn’t engage much with other users beyond answering customer questions and complaints. But that has shifted: In 2017, Mashable covered the rise of funny, relatable, and “human” brand Twitter accounts, including Wendy’s, an account that’s gained acclaim for their more human approach. Brands have learned that they’ll get considerable engagement if they tweet like an individual, use “I” in their tweets, and tap into constantly shifting online trends. Mashable highlighted the sass in Wendy’s back-and-forth exchange with a customer who said their beef came frozen rather than fresh and that McDonalds is the superior fast food chain.

After realizing their follower count and engagement increased, Wendy’s decided to stick with this social-media strategy. “We want to be likable and sassy,” Kurt Kane, the President of Wendy’s U.S. Market and Chief Commercial Officer, told Forbes in 2018. “We don’t want to be seen as sarcastic and rude. But we walk a fine line. Sometimes we get it wrong in tone.” Other brands quickly hopped on. In 2014, a Twitter account called @BrandsSayingBae (note that the word “Bae” is derived from AAVE) began posting screenshots each time that popular brands ranging from Mountain Dew to Arby’s utilized the acronym on their social media accounts.

@BrandsSayingBae, which is still active, has since evolved to call out more general “internet speak” from brands: A recent tweet mocked Chase Bank’s commentary about people wondering where their money is going and then spending it all on food and coffee. @BrandsSayingBae then posted screenshots about Chase receiving government subsidies, suggesting that the bank itself isn’t all that great at managing money. It can be painfully obvious when brand accounts attempt to embrace trending terms, especially given the racialized origins of these terms, something many social managers, given their whiteness, don’t actually understand.

“Right now somewhere there’s a room full of white people brainstorming how to sound more Black on the internet—whether or not they’re consciously aware that’s the end goal,” social media strategist Amy Brown explains. “It’s gross, and it’s reflective of a lot that’s gross about the advertising industry as a whole.” Jagger Blaec, a Black femme digital content creator and writer, tells Bitch, “It can be super cringey to watch a brand’s clunky attempts at intersectional marketing. And because AAVE is what fuels the internet we see predominantly white creative teams churning out AAVE in the form of digital blackface.”

Still, the Black people and communities of color who contribute so heavily to “internet speak” rarely benefit from having their language lifted by brands. Some, like Lil Nas X, get lucky: He was able to go from having a Nicki Minaj stan account to being an award-winning artist partly because of his unique approach to using social media. More of us, however, see our understanding used against us, as our tweets are used to discredit us, say we’re too antagonistic, and prevent us from landing bigger opportunities. (Even the algorithm is biased against the Black users.) “I admittedly don’t know the ethnicity of who manages these accounts currently,” Blaec explains. “I do know what the landscape of most creative agencies looks like, and you are hard pressed to find young Black creatives managing these accounts if they’re hired at an agency at all. I do see a ton of large corporations mining and aggregating the thoughts and creativity of Black social media users without compensating [them].”

Brown agrees. “It’s not the first time brands have co-opted something that doesn’t belong to them (Dove and body positivity, Pepsi and political protests) and it likely won’t be the last. I’d be lying if I said I knew how to fix it. I do know there has to be a way to sell people shit that isn’t inherently exploitative. Or maybe there’s not, and the only real solution is to abolish capitalism.” When brands and the social teams and agencies who run them capitalize on the very language crafted by Black Twitter without at all hiring these people, they continue turning Blackness into a trend that can be turned for profit.

“A lot of brands, and to some extent Twitter as a whole, have adopted language or jokes that originated on Black Twitter and Gay Twitter,” Brown says. “Occasionally it works. Think about Fenty Beauty, a business founded by a Black woman that produces makeup for all skin tones. They have the authority to tap into Black Twitter. But then I think about the countless other brands who have co-opted AAVE who I know have a white dude writing their tweets. It grosses me out.”

Social media changes every day, and soon, the accounts that have found success by tapping into this AAVE-laden meme-speak may be forced to shift strategy, leaving the appropriation of Blackness behind. But Blackness doesn’t disappear for Black people, and as brands continue flattening their digital language and stripping it of meaning, it leaves some people with the idea that words like “on fleek” and “bae” were created by fast food restaurants instead of human beings. Popeyes didn’t notice the opportunity to be found in responding to the Chick-fil-A tweet until Black users did, so in a sense, those millions of dollars weren’t earned via the genius of its advertising agency—and its all-white leadership team. Instead, this is yet another example of the brilliance and culture-shaping found within Black Twitter.